The theatrics and confusion over Sarah Palin's upcoming schedule probably won't help her standing with Republican activists in Iowa, New Hampshire and South Carolina, who already overwhelmingly prefer that she not run for president in 2012, according to the survey conducted this past week by The Huffington Post and Patch in the early primary and caucus states.

Palin had previously announced plans to appear at a Tea Party rally in Indianola, Iowa, on Saturday, but news reports on Wednesday quote sources close to the former governor saying the appearance is "on hold" or "no longer confirmed," although rally organizers say Palin has not informed them of any change. Separately, Palin announced new plans to speak to another Tea Party rally in New Hampshire on Labor Day.

Last week, our HuffPost-Patch Power Outsiders poll of influential Republicans in Iowa, New Hampshire and South Carolina found two thirds satisfied with the current crop of candidates and only 8 percent offering Palin when asked who else they would like to see run in a follow-up question.

This week, we decided to dig deeper into evaluations of Sarah Palin, starting with a more straightforward question: Should Palin run or not in 2012? We received responses back from 151 of our influential Republican leaders -- 35 in Iowa, 48 in New Hampshire and 63 in South Carolina. Just 15 percent said yes, Palin should run, while 81 percent said she should not.

Probing deeper, we found much sympathy for Palin among these local Republican activists, party and elected officials. Three out of four (76 percent) describe her as someone who "takes stands on issues you agree with," although they divide more closely on her readiness to be president. As many say she is well described as someone who "would make a good president" (47 percent) as say that phrase describes does not describe her (47 percent). 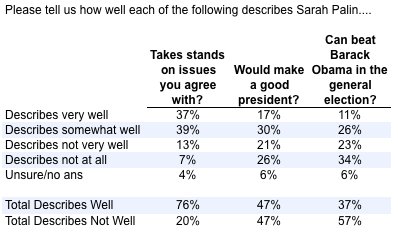 Electability is the sticking point. More than half (57 percent) say she is not described well as someone who "can beat Barack Obama in the general election." Just 26 percent say that phrase describes her somewhat well and 11 percent say it describes her very well.

Palin has both big fans and strong detractors among this group of local influential Republicans. One respondent said Palin had "sterling yet largely silent respect among women, mothers and Conservatives" and was ready to be unleashed when she announces, while another respondent said simply, "NO! NO! NO!" when asked if Palin should run.

But the more common response was a mix of respect and sympathy for Palin combined with grave concerns about electability:

We need more Sarah Palin's in our society, so her type of grassroots politics becomes more commonplace. Unfortunately, Sarah Palin has scared off enough people that she's not likely to have widespread support. That's too bad.


Sarah Palin’s strength is her common sense approach to key issues affecting the United States, She brings these issues to light and fires up the base of the Republican party. How I also understand she is polarizing and the downfall is that she does not always play well to the independents.


I love and admire Sarah Palin. I would vote for her for President should she get the nomination, but I do not believe she is electable as President.


I love Palin to death but there is so much negativity attributed to her it would be a steep hill for her to overcome (in order to be elected). She should continue doing what she's doing. She's a political voice and she does it very well.


Of course, our respondents are "Power Outsiders" only from the perspective of Washington, D.C. They are Republican insiders within their communities, the local version of the Republican "establishment" that Palin often rails against. That characteristic highlights an important limitation of this survey: They are not Palin's base.

Should she run, Palin's support would have to come from the grassroots and, presumably, from many who do not typically vote in Republican primaries. But since presidential nominees are typically the candidates that win the early "invisible primary" for endorsements from influential activists and office holders, Palin would begin with an enormous political handicap.

All of the individuals listed below have agreed to participate in the Power Outsiders surveys, although not all responded to this week's questions.