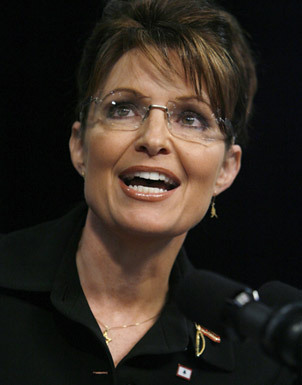 Given the power Palin is wielding, at least on the crowd and media wow factor, the discussion of whether she'll run in 2012 hardly matters at this point. However, it's entries like her latest Facebook posting that suggests that if the opening is there, she'll take it. You just don't take on defense issues like this unless you've got a motive, especially since her bona fides on the subject are so slim. The latest entry is obviously another salvo to sound impressive on national security, her main target being Pres. Obama. I can hardly wait until she does a follow up on the leaked Gates' memo on the inevitability of Iran going nuclear. But in her current Facebook post, there's little doubt Sarah is keeping her options open, courting the career hawks in the U.S. military industrial complex being as good a just in case plan as any.

There are several problems, however, particularly in Palin's drive-by complaint about the F-22 being scrapped. She doesn't do any explaining of her rationale, of course, most likely getting these scribe points yet again from Randy Scheunemann. However, when you're up against the likes of SecDef Gates, I'd say you're punching up a bit higher than you can possibly reach.

I know that the Air Force is up here and around talking about 350 or something on that order," the Secretary said. But buying more of the costly F-22 will come at the expense of the new F-35 Joint Strike Fighter, which is about half the price.

The reality is we are fighting two wars, in Iraq and Afghanistan, and the F-22 has not performed a single mission in either theater," Gates said. That's the kind of statement that sends generals up the wall -- not only because it's true, but because it's the Secretary of Defense who's saying it.

As Palin does every chance she gets, she begins with a shot at Pres. Obama on the Middle East, then goes on from there. Here's a Facebook snippet:

Asked this week about his faltering efforts to advance the Middle East peace process, President Obama did something remarkable. In front of some 47 foreign leaders and hundreds of reporters from all over the world, President Obama said that "whether we like it or not, we remain a dominant military superpower... It is in America's and the world's interests for our country to remain a dominant military superpower, but under our great country's new leadership that dominance seems to be slipping away. President Obama has ended production of the F-22, the most advanced fighter jet this country has ever built. He's gutted our missile defense program by eliminating shield resources in strategic places including Alaska. And he's ended the program to build a new generation of nuclear weapons that would have ensured the reliability of our nuclear deterrent well into the future. All this is in the context of the country's unsustainable debt that could further limit defense spending. As one defense expert recently explained:

'The president is looking to eliminate the last vestiges of the Reagan-era buildup. Once the wars in Iraq and Afghanistan are "ended" (not "won"), the arms control treaties signed, and defense budgets held at historic lows while social entitlements and debt service rise to near-European levels, the era of American superpower will have passed.'

One defense expert invoking the "Reagan-era buildup" is code for don't take our toys away, even if they're not what's needed today. Want to bet this "expert" is also a Fox News analyst? But at least the establishment knows she's on the side of the Pentagon careerists. After all, a maverick can only go so far.

Pres. Obama is just the latest Democrat to get hit by the right wing national security peanut gallery. Pres. Bill Clinton got blamed for downsizing the military even though he was following what began under Pres. George H. W. Bush, which was also about re-prioritizing, as it always is. Of course, what I also find interesting is that Republicans and their hawk right base never blame Reagan for cutting and running after the Beirut barracks bombing in Lebanon, or for Bush 41 missing any signs prior to the U.S. being hit in 1993, something that was never discussed at all. Mary Matalin and her ilk as recently as December 2009 blamed Bill Clinton for 9/11, while giving George W. Bush a pass for missing the signs, even if he was warned by the Clinton administration. Recently, when Obama invoked nuclear zero, you'd think the right would have at least remembered that Pres. Reagan talked about it the 1980s. However, they ignore their own hero's dreams, making you wonder if Reagan could even be a Republican today. The right's national security criticisms make no sense, but they work. Unfortunately, even though he deserves more credit, under Pres. Obama Democrats are once again losing the national security perception game, according to Democrats pollsters.

It gives Mrs. Palin her opening, no matter how badly she misses the target.

Evidently Sarah isn't aware that the first person to start cutting away the production of the F-22 was none other than US Secretary of Defense Dick Cheney. He did it in 1990:

Cheney also testified in 1989 to the House Armed Services Committee on abolishing the AH-64 Apache.

Is she aware of what Bush 41 did when he was president? He stated:

After completing 20 planes for which we have begun procurement, we will shut down further production of the B-2 bomber. We will cancel the small I.C.B.M. program. We will cease production of new warheads for our sea-based ballistic missiles. We will stop all new production of the Peacekeeper missile. And we will not purchase any more advanced cruise missiles.

This is what leaders do over time to modernize and make our military more efficient. What SecDef Gates has tried to accomplish under Pres. Obama is historic with regard to cuts, even if it's not near enough because of push back from the military careerists.

Never mind that Palin's assessment of the F-22 flies in the face of real military experts. Winslow Wheeler, who I assure you knows a hell of a lot more about this than Palin, states that the F-22 is "very expensive, but not particularly impressive, fighter jets."

Perhaps Mrs. Palin is basing her assessment of the F-22 on an air show.

Whatever it is, in her latest Facebook posting she further reveals her ambition, while using someone's talking points to sound knowledgeable, in a political statement that could have easily been written by Sean Hannity. So, however much she's paying her national security scribes it's way too much.