Earlier this month I was in Alaska and could not resist the temptation to pay a visit to Wasilla, the home of the original Mama Grizzly.

I arrived on an overcast afternoon, and after watching the Wasilla Warriors practice football outside the high school, photographing a colorful "Guns and Loans" shop, and squinting at Sarah Palin's house from afar, I visited the public library. There I came across a copy of Wasilla High School's summer reading list.

But it was not the sort of narrow-minded list I would have expected to find in the library where Sarah Palin, as mayor, seemed to advocate book censorship when she quizzed a librarian, "What would your response be, if I asked you to remove some books from the collection?"

Wasilla may be a bastion of conservatism in a red state, and Palin a lifelong member of the NRA, but instead of finding books full of guns, guts, and glory, I found books that reflected a full range of views on the morality of war.

Art Spiegelman's Maus, a harrowing tale about the Holocaust, is required reading for entering ninth graders. Khaled Hosseini's The Kite Runner, a novel about the devastation visited upon Afghanistan by the successive wars of the past decades and the rise of the Taliban, is required for AP English.

Also, "highly recommended" is Tim O'Brien's collection of stories about Vietnam, The Things They Carried. Partway through the book O'Brien advises readers, "A true war story is never moral . . . As a first rule of thumb . . . you can tell a true war story by its absolute and uncompromising allegiance to obscenity and evil."

Who would have guessed they would be reading these books in Wasilla?

I wondered what the high school students make of O'Brien's work. And I especially wondered what they make of it when it is coupled with Charles Henderson's Marine Sniper: 93 Confirmed Kills, another "highly recommended" book on the list.

O'Brien writes of war's immorality. Henderson's biography of a Vietnam War sniper reads as a nearly three hundred page tribute to a man who, with an assassin's skill, pioneered the use of the .50 caliber machine gun as a sniper weapon.

The message of this reading list about war is complicated and contradictory, and it well reflects the long running debate among American writers about whether war should be read as patriotic gore or patriotic glory.

Ever since our nation's inception, highly idealized odes to fallen soldiers have coexisted with grisly accounts of bloated corpses. Celebrations of heroism have shared shelf space with works mourning the senseless death of the young.

Take for example the Civil War. Contemplating the bodies left on the battlefield at Fredericksburg in late 1862, Walt Whitman lamented in his diary, "O my sick soul! How the dead lie." And he concluded, "O there is no hell more damned than this hell of war." That same year appeared the uplifting lines of Julia Ward Howe's "The Battle Hymn of the Republic," which envisions God marching beside the Northerners in battle. The work begins, "Mine eyes have seen the glory of the coming of the Lord."

This summer, as the nation debates whether to pull out of Afghanistan and argues about the ethics of using predator drones, the youth of Wasilla also is learning about war's moral challenges. (Except the high-school drop out Levi Johnston, who instead is running for city mayor.)

Walking in a drizzly rain toward the local shopping mall, I wondered how the students of Wasilla will be affected by their reading. Will the antiwar message of Tim O'Brien's book resonate with the Wasilla Warriors? How many of them will be off to war themselves after graduation?

Two teenage boys meandered behind me, and I turned to ask them about their summer reading. They did not have any assigned summer reading they insisted. So I pointed to a sign for the mall that towered over our heads. On it someone had placed big block letters that spelled out, "SUMMER HIGHSCHL READING LIST ... THE BOOKS R IN."

The more conversational of the teenagers, a husky fellow with a fresh crop of pimples flourishing on his cheeks, looked up at the sign then shrugged. "Nobody reads those books."

Cynthia Wachtell is the author of "War No More: The Antiwar Impulse in American Literature, 1861-1914" and can be reached -- here -- at her website.

PHOTO GALLERY
What They're Reading In Wasilla
Download
Calling all HuffPost superfans!
Sign up for membership to become a founding member and help shape HuffPost's next chapter
Join HuffPost

Sarah Palin's Hometown, Wasilla, Alaska: What Are They Reading? (PHOTOS)
What They're Reading In Wasilla 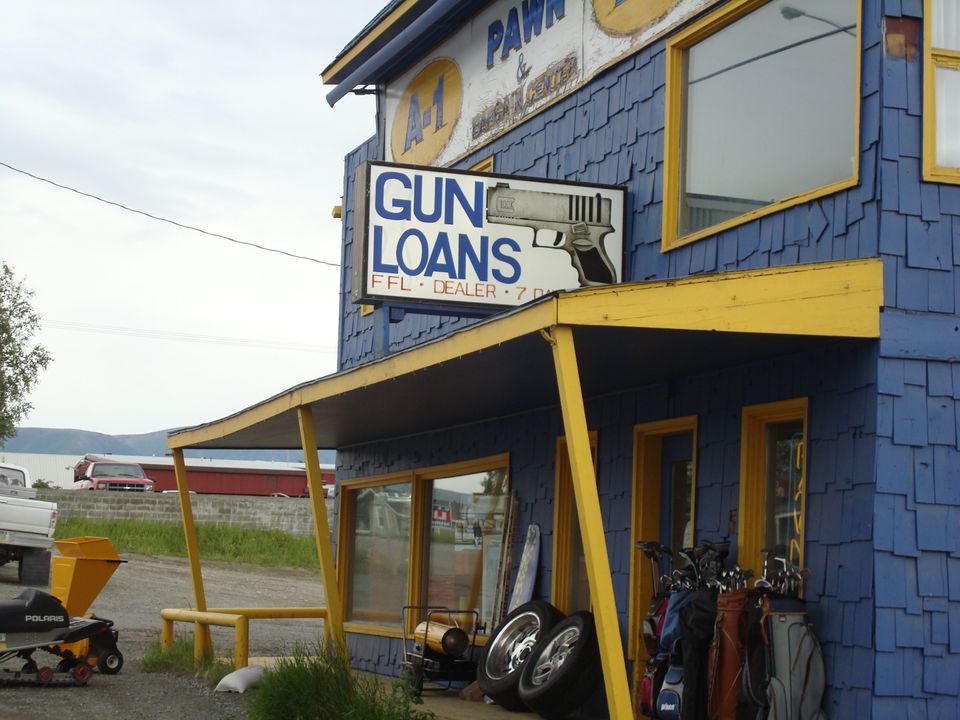 1 / 7
Guns & Loans
"I arrived on an overcast afternoon, and after watching the Wasilla Warriors practice football outside the high school, photographing a colorful 'Guns and Loans' shop, and squinting at Sarah Palin’s house from afar, I visited the public library. There I came across a copy of Wasilla High School’s summer reading list."