Sarah Palin was elected Governor in November 2006. She inherited the fiscal year 2007 budget, but was responsible for the next two -- fy 2008 and fy 2009. It is difficult to sort out the total spending in budgets, as there are state outlays, federal matching funds, revenues from special funds, and capital outlays. The following are figures from the state general fund portion* of the operating budget . She inherited outlays of $3.343 billion. By fy 2008 this had risen to $3.763 billion. The fy 2009 budget, so far, is $4.242 billion. The two year increase is a whooping 27 percent -- hardly a measure of fiscal restraint. 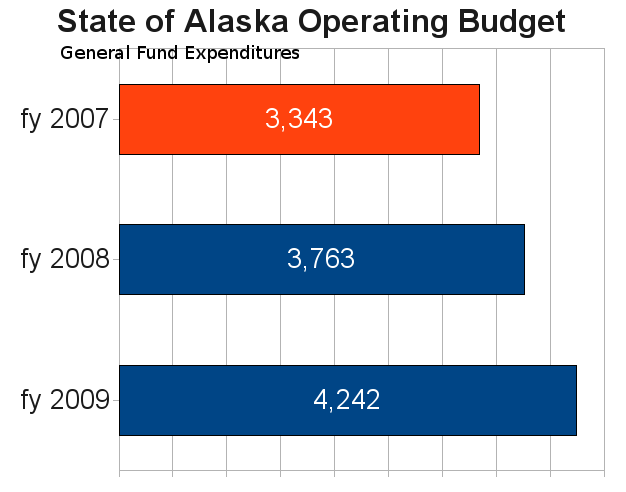 Some other numbers from the budget illustrate just how much the Alaska Government is spending these days. When you include not only the state general fund contributions to the operating budget, but also federal matching funds, the capital budget and other sources of funding, Governor Palin's fy 2009 request was $8.496 billion. This works about to about $12,680 per person, or more than $50 thousand for a family of four. I think it is worth pointing this out.

* The part paid for by state taxpayers.