As mugshots go, this one is pretty arresting.

An Arkansas woman who has been charged with a variety of crimes in the past may now be guilty of stealing the hearts of people on social media.

On April 28, Sarah Seawright was arrested for failure to appear in court for a 2014 arrest for careless driving and driving without insurance, according to KFOR.

The 24-year-old suspect was taken to the Pulaski County Jail and booked where she posed for a mug shot.

Seawright has since bonded out, but that booking photo has since gone viral since it was posted May 5 on Ugly Plastic, a Tumblr page devoted to the mug shots of attractive women.

1. God doesn't make any mistakes. Pray for her.
2. Just becasue she "bad" doesn't mean she did it.#PrisonBae pic.twitter.com/q8RnHXIjRM

The arrest isn't Seawright's first run-in with the law.

Back in 2012, she was arrested on charges of aggravated robbery, kidnapping, first degree battery, hindering prosecution, and tampering with physical evidence, according to ArkansasMatters.com.

Officers said Seawright offered a ride to a man she knew, who was then robbed at gunpoint by another man already in her car.

In that case, her booking photo was also more flattering than the typical mug shot.

Seawright was sentenced to five years probation in 2014 after pleading guilty only to hindering apprehension, a class B felony, according to Heavy.com.

Seawright was a little surprised by the attention according to one Facebook post she made on Tuesday, where she commented, "This s**t CRAZZZZYY".

Still, she seems to be embracing the notoriety, posting an email for people who want to book her for media interviews on her Instagram page, which remains private. Seawright is even using #prisonbae in her own tweets.

Would love to go on @WendyWilliams #PrisonBae ❤️

There isn't a handbook on what to do when your mugshot goes viral, but Meagon Simmons, who inspired the "attractive convict" meme says Seawright should "prepare to be judged."

In April 2013, Simmons' 2010 mug shot from a reckless driving charge went viral after it inspired more than 280 posts, mostly along the lines of "guilty ... of taking my breath away."

Three years later, the booking photo still is a part of her life.

"People still share memes with me and the newest one claims I'm a child molester," she told HuffPost. "It gets annoying." 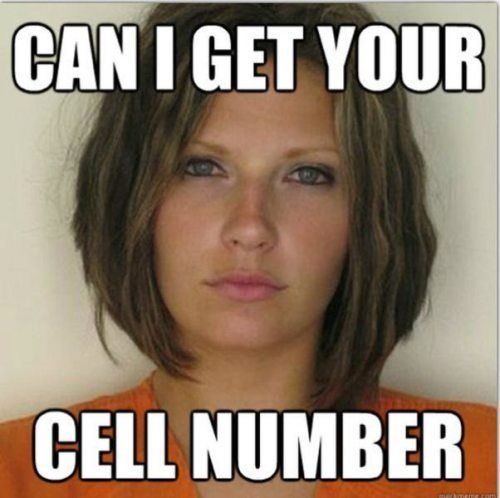