There is a damaging myth about art I fear I unwittingly spread every time I view a painting or photograph hung on the wall. I imagine the Lone Creator of this image -- what great insight regarding humanity had he meant to impart from the solitary confinement of his genius? By what mystical processes, to which I am denied access, had she, the artist, somehow salvaged a personal truth for me to call my own? 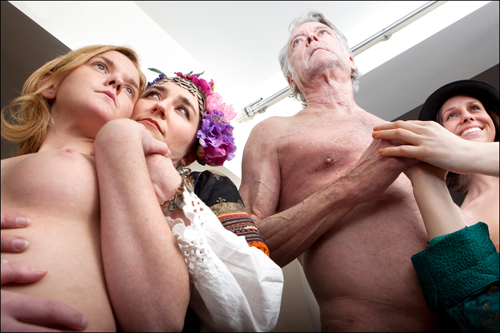 From the moment I engage with the image, I hide my inherent disconnection from it by groping for some intellectualized understanding of what the work "means to me." I stand for many costly moments without movement, gazing at an image that mimics my present inertion. Perhaps if I hadn't built the vacuous space between the artist and myself where that myth now resides, I would see that what's most important is what the work means in me. The signifier of great art is not merely the quality of what we see the artist has created, but rather what we feel the artist has created in us.

Last May at Skylight One Hanson in downtown Brooklyn, it was clear that photographer Sarah Small had created something within the more than 120 models taking part in her performance art opus Tableau Vivant of the Delirium Constructions. The live happening -- which incorporates elements of opera, choreography, drama, and the thematic content of Small's photographs seamlessly into one continuous performance of organic expression -- placed into rare focus the emotional connection an artist can have with her subjects. This connection will continue with the 2013 release of a feature film -- which documents the Tableau process and the interactions that result -- and a Global Tour of the Tableau Vivant performance, coordinated by Contaminate NYC, that will begin in Venice during the 2013 Biennale. 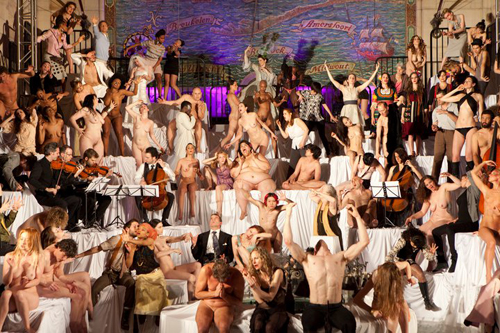 "Since I was a little girl I've always been endlessly fascinated by people and collecting groups of people that were really different from each other and learning about different people, and then sort of aggressively inserting myself into the lives of lots of different kinds of people of all ages and backgrounds," Small said. Indeed, her subjects comprise a startling collective of disparity -- ranging from the youthful to the aged, the slight to the obese, the naked to the clothed, the familiar faces to the outliers. 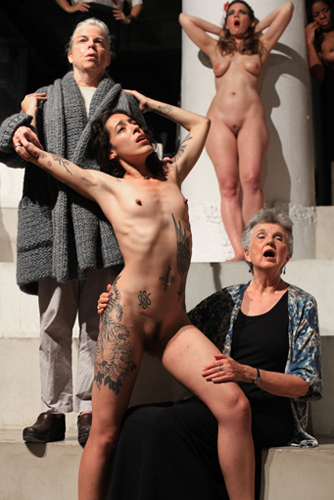 Each model begins the Tableau in a static pose, with a loaded, quasi-Mannerist expression on his or face. There is the implication of a seemingly infinite number of mini-dramas waiting to unfold between the models, but until Small moves amongst them, directing them to "awaken" in movement, it is unclear what visual stories will be told.

What is clear is that in the intervening moments, any differences that may have seemed insurmountable within this eclectic community dissolve away -- as all its members open their internal emotional experiences to physical manifestation, a psychological phenomenon Small characterizes as "inside-forward, out in front of you." 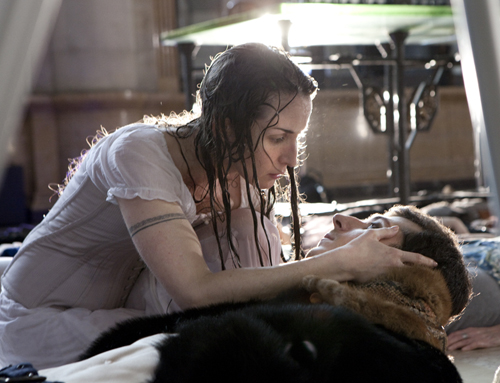 What the artist didn't quite anticipate, however, was what her subjects elicited from her during the May performances of the Tableau: 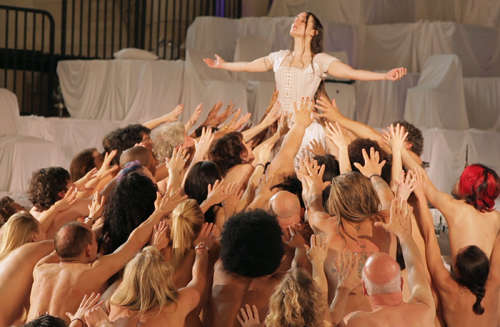 It was overwhelming, and if we were to go so far as to call it a burden, it was the most beautiful burden that I've ever experienced... I feel like I'm always kind of looking for a partner who kind of energetically matches me or supersedes me. I'm always looking for something -- I've never really been able to find that something -- that feels like this huge, multifaceted, powerful, kind, challenging, larger-than-life entity or something to interface with, to teach me with, or something. It's hard to put into words. So in a way, I feel like I manifested a partner for myself... I felt like the Tableau itself sort of became its own entity, and that it was no longer necessarily about the individuals, so it wasn't about 120 individuals -- it was about one multifaceted creature that I had developed a relationship with.

John Northrup, who works as editor of the upcoming feature film, entitled The Delirium Constructions, perceives that the artist was "creating her double, or she was creating herself in another form." Perhaps the work of artists have always functioned as an extension of themselves, the art directly tapping into the artist's interior, previously undisclosed personhood. In Sarah Small's Tableau Vivant, however, we find an artist actively engaging with the emotional interiors of her subjects as means to expressing herself more fully. In the process of this shared experience -- in which authentic people reveal themselves authentically -- Small tears down the veil that had separated the viewer's perception from the artist's vision.

For more information on Sarah Small's Tableau Vivant of the Delirium Constructions, you may visit http://www.TheDeliriumConstructions.com/ and the project's Kickstarter page.

May 2011 - 120 Model Tableau Vivant - Skylight One Hanson from The Delirium Constructions on Vimeo.