Rather than make a contribution to the Romney-Ryan ticket when it mattered earlier in the 2012 campaign, Sarah Palin's political action committee made a last-minute $5,000 contribution this week in what was obviously an attempt to call attention to Palin rather than to aid the final Romney campaign push in any meaningful way.

Like everything else in the Palin political repertoire, Palin is still trying to peddle her rancid brand of demagogic snake oil to the American people. Her political action committee is little more than a con job--she has donated merely 1.7 percent of the money she has raised to political candidates across the country. It's a scam from beginning to end. 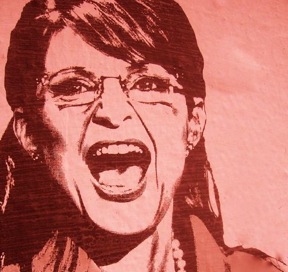 Palin's last-ditch grandstanding will not only turn off independents and undecided voters, it will be sure to bring out Democrats in droves. Of all national political figures, Palin is by far the most polarizing (with negatives literally off the charts), and her latest self-serving stunt now seals the deal--Romney will go down on Tuesday.

While Palin's obsession with President Barack Obama seems to know no bounds, her "support" of Romney has been luke-warm at best--and came only after taking potshots at Romney well after anyone capable of second-grade math could ascertain that Romney had secured the Republican nomination.

Palin's husband, Todd, publicly supported Newt Gingrich, and La Palin did everything she could to forestall Romney's nomination in favor of a brokered convention. It was more of Palin's magical thinking that emanates from her parallel reality somewhere in a distant universe. As former Bush White House communications director Nicolle Wallace--a loyal Republican--so aptly declared, Palin is "cuckoo for Cocoa Puffs."

Moreover, several sources close to the Romney-Ryan campaign have confirmed to me that Palin is an absolute anathema to the Romney camp--which explains not only her highly publicized absence from the Republican National Convention this past summer, but also why Palin has not been called to campaign anywhere for Romney on the hustings, not even in Alaska.

As I noted in my book The Lies of Sarah Palin: The Untold Story of Her Relentless Quest for Power, there is longstanding bad blood between Romney and Palin that dates back to Romney's term as head of the Republican Governor's Association.

A close look at the Palin-centric website Conservatives4Palin (C4P)--founded by the Palin sycophant Rebecca Mansour, who is still on the Palin payroll (albeit surreptitiously as Aries Petra Consulting) and who was busted for tweeting nasty comments about Romney and Bristol Palin last year--reveals a constant barrage of anti-Romney messaging (you can see it here and here and here ad infinitum) throughout the primaries and into early October. As recently as September 29, C4P featured a column describing Romney as "a blue-state Republican establishment suit, just another rich guy in a parade of all those white-shoe moderate GOP Gumbies you see in Obama's Illinois [sic]."

Perhaps the most telling C4P posting of all--coming during the second week of September--was entitled "Ryan Sacrifices his Conservative Credibility by Running with Romney." You think Palin's sharks were trying to taint Ryan for 2016?

It was only after Romney thrashed Obama in their first debate that the C4P anti-Romney messaging stopped and Palin's minions jumped on the Romney bandwagon--just like their cult leader-- albeit half-heartedly. Talk about calculated.

Palin's paltry contribution will bring absolutely no turf--nor turnout--on behalf of Romney and reflects her merely covering her bets on the election. If Obama wins (he is now the odds-on favorite), she can say she supported the party nominee when she panders for the GOP nomination in 2016 (that, too, will be a scam); if Romney were to pull off a miracle (and it would be a bigger miracle than Joseph Smith finding those golden plates in upstate New York nearly two centuries ago), Palin could claim that her last-minute endorsement played a roll.

But that's not gonna happen. I'm happy to take any GOP wagers from all the current group of polling skeptics and Palin puppy dogs--from Sean Hannity to Bill Kristol to all the other intellectual right-wing twerps dolling out denial on a national scale. And I'll double-down if either of the candidates hits 300 electoral votes. Any takers?

Whatever chance that Romney had of turning the campaign around is now gone with the weight of Palin's negativity pulling him down like an ten-ton anchor in the Gulf of Alaska. Romney's going to lose on Tuesday--and Sarah Palin's self-serving antics over the last four years will be a good deal to blame. Just as she was four years ago, Sarah Palin remains the Democrats' best weapon come Election Day.