Does history's shrapnel still inflict damage and more critically, have we learned to mitigate the collateral damage? Some still debate whether Gavrilo Princip, the Serb nationalist who assassinated Austro-Hungarian Heir to the Throne Archduke Franz Ferdinand, is in the same category as Osama Bin Laden, the Al-Qaeda leader who orchestrated the attack upon New York City's World Trade Center and the Pentagon. However, the more pressing question is why have their actions succeeded in molding the agenda, perhaps even now.

The globe was already fertile for a rapid escalation when on June 28, 1914, Gavrilo Princip shot Archduke Franz Ferdinand and wife on a Sarajevo bridge. It was not only Serbian nationalism that was smoldering. German, French, British and Russian imperial ambitions had been consuming much of the globe including conquests and colonial subjugation from Africa to Asia. By then lesser powers as Spain, Portugal and the Netherlands had been eclipsed but nonetheless clung to imperial mercantilist ambitions. The Ottoman Empire was the "sick man of Europe," and even smaller powers positioned to scavenger the remains. Beyond Europe's borders, Japan was becoming infected while US nationalists espoused "manifest destiny" and divine authority beyond the North American continent once the Native Americans had been effectively vanquished to second-class citizenship, along with Blacks (African-Americans.) Even Australia was complicit in the spreading contamination of ethnic, racial and religious chauvinism as the Aborigines faced ethnic cleansing pogroms, literally hunted to brink of extinction like some indigenous animal species.

The century of modern genocide started well before Hitler and WW II. Debate whether Ottoman treatment of Armenians during WW I consisted genocide, but extermination had dominated actions and strategy of imperial ambitions, from the war upon Native Americans to the Irish Famine to the untold ethnic cleansing directed at indigenous peoples of Africa and Asia even in the early 20th Century. Closer to the heart of Europe, the Balkan wars had been launched and indigenous Muslim (particularly Slavic Muslims of Sandzak) and Jewish populations were already suffering pogroms and forced conversions all in the name of religious homogeneity and pure national identity. After several centuries of horrific religious wars, the Catholic/Protestant divide had claimed millions of lives in genocidal harvests.

Claiming God as Partner in Nationalism and Genocide?

God has been claimed in exclusion to the other as partner in nationalism /patriotism and genocide. The mentality of a monolithic hamlet was expanded to national borders. On the heels of Inquisitions and wars upon presumed heretics, Europe became ground-zero for a new expansionist national identity. Competing imperial ambitions consumed the weaker and addressed with suspicion diversity of identity. (See: "Religion Cause for War?")

A Land of Diversity and Dissent:

Bosnia was a kingdom defined by a plurality of influences and a "heretical" Bosnian Church or "Bogomils." Islam was present even before the Ottomans. Jews and Moors escaping the intolerance of the Inquisition were welcomed to Bosnia & Herzegovina. The eclipsing of the Ottomans and the advent of BiH as Austro-Hungarian Empire protectorate was met with anxiety by many of BiH's people. Nonetheless, Sarajevo as capital and smaller cities perpetuated inclusiveness. Mosques, churches, cathedrals and synagogues stood watch on the same avenues. Books written around that time reflect an inclusive Bosnian identity: "Bosnian Muslim," "Bosnian Orthodox" and "Bosnian Catholic."

With the Purpose of Igniting a Broader Regional/Global Conflict?

Sarajevo has been described as creating more history than it can consume, but like New York City it has been more the target for what it stands, co-existence and the fruits of diversity and openness. A bridge in Sarajevo was named for Gavrilo Princip during the time of ex-Yugoslavia, but opinion of the man and act substantively differs. Much of the world will be represented in Sarajevo to observe the centennial and employ the remembrance to avoid a repeat of history. The political leaders from Belgrade and the Republika Srpska entity of BiH have declined though. Paraphrasing Shakespeare's Julius Caesar: One man's hero is another man's terrorist. Regardless of nationality, unfortunately most still see the means justified by imposing their narrative of history. The former Yugoslavia did not fail due to its ethnic diversity but rather lack of political pluralism which gave opportunity for nationalism to exploit.

New York City was targeted as much for its diversity, openness, and as the de-facto global capital. Striking the World Trade Center caused casualties from most of the globe's religions, cultures and states. Bin Laden also sought to have the shrapnel of his terror shape the future avenues of history. A hybrid of nationalism and religion is the primary driving force, on the side of those promoting a monolithic agenda but too often also employed by those who ostensibly should be defending pluralism.

Defined by Inclusion or Ethnic/Religious Delineation?

In the fall of 1995, then US Assistant Secretary of State Richard Holbrooke hurriedly traveled to Sarajevo to meet with then BiH President Alija Izetbegovic as part of what was then dubbed as the "American Initiative" to secure an end to the conflict. Holbrooke wanted a meeting alone with the President, but Izetbegovic insisted upon having his own American. (I was then BiH Foreign Minister.) It was not so much that he sought my advice but more the presence of one who would counter Holbrooke's pressing manner. The three of us met in a historic house, somewhat damaged by siege and shelling of Sarajevo at that time. It was called "Konak" or translated to English, the overnight: the residence where Archduke Ferdinand and wife had spent the final night before they were killed.

Defining Rule of Law Based on Identity of Victims and Perpetrators:

Holbrooke had been given long reigns by the Clinton Administration. He had acceded to a plan backed by the Kremlin, Paris, London, most of the EU as well as Slobodan Milosevic's Belgrade that effectively legitimized ethnic cleansing and delineated BiH territorially along largely ethnic lines. Sarajevo holds on as a multi-ethnic capital, but most of the country looks more like Apartheid South Africa than Europe or US. Even as it ended the war, Bosnia still bleeds from this "deal." Further, the abandonment of Bosnia's Muslim population to genocide and betrayal of Western democracies in defending a multi-ethnic, pluralistic society continues to disillusion. Perception of double standards and actions that even now fail to live up to words with respect to indigenous European Bosnian Muslims has served to alienate Muslims around the globe.

Al Qaeda, ISIL and others have sought to magnify the alienation and exploit the dissolution filling the vacuum not only their own rules but sense of religious nationalist belonging. As damaging, in many Western democracies exclusionary nationalism, race, religion have been similarly adopted as rallying cry and frequently vote-getter. "Islamist" is a term tossed around without distinction while God is claimed to exclusion.

Sarajevo 1914 does not appear so distant, at least in terms of rhetoric and inclination to dehumanize the other. But, then perhaps our awareness has been raised to the danger: "When religion is our best excuse for national defense," lyrics from the song "I Remember (It's Happening Again)" by Griffin House, tells it better than political rhetoric. We just had the opportunity to show Griffin and wife around the UN - some of us still hold out hope that a new age of co-existence as well as peace is dawning, where diversity is a strength rather than dilution. 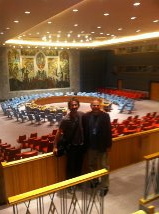 Hear/See "I Remember (It's Happening Again)" by Griffin House. 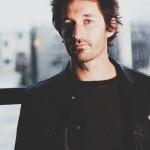