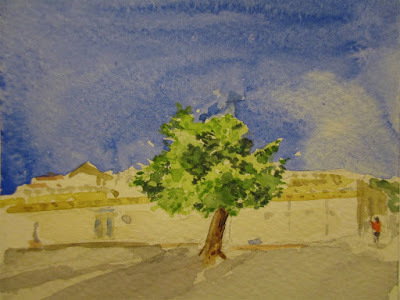 Emily Dickinson once reputedly said something to the effect of, "I know Amherst well." It doesn't take long to realize that three of the items that are most characteristic of Alghero are caramel, coral and octagonal shaped structures and that sunbathers like to nestle themselves into the rock formations that lie all along the shoreline--finding little plateaus of comfort in seemingly precarious spots like birds do when they find their perches. Alghero, known as "The Coral Riviera," actually had its own Musee della Corallo. Though it appears to have been recently shuttered, if you look through its iron gates you can see tree branches in its courtyard painted red to imitate the way coral looks. A version of medieval Catalan is still the indigenous language the way Ladino is in the Tyrol. When you walk down into the town you will actually see many remnants of the medieval era, one of them in the l7th Torre di San Giacomo (Tower of St. James) whose architecture is mirrored in the Villa Mosca or charming house, another octagonal structure that is set on a promontory above the main drag. Nature has unusual and inventive ways of accommodating itself to the rocky terrain. You may see a branch jutting straight out of rock and when you walk down into the old town you will note a solitary oasis amidst the old stone buildings. Yes a tree grows in Alghero, and one other thing, unlike many other towns in Italy, the toilets have seats.