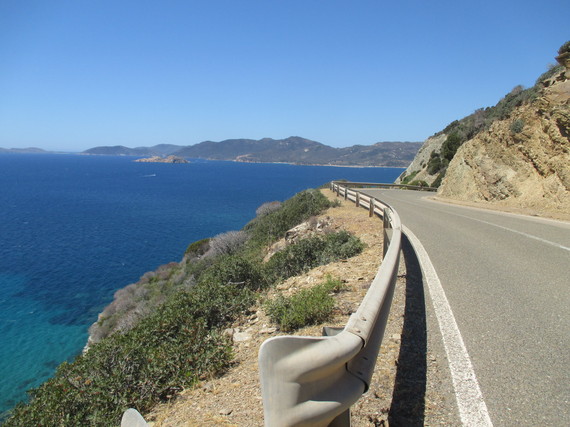 Sardinians seek quaint alcoves, little oases of sand that are a respite along the rocky shores of the island. Often these beaches take some doing in accessing. One, Tuerredda Beach, is not far from the town of Pula on the southwest coast, a classic summer resort with town square and band playing into the night, that's about thirty five minutes from Cagliari--the largest city on the island. To arrive at Tuerredda you have to negotiate perilous winding roads with set backs that overlook breathtaking vistas, such as a narrow peninsula running out in the sea, really an oversized jetty, at the end of which is one of the islands many round shaped Spanish towers. The sun is brilliantly reflected across the crystal clear waters and once the climbing and descending is all over and you realize you're arrived sound in body and mind the pay off seems even more worth it due to the perils you've withstood. The beach which is itself modest in size is packed on a Saturday afternoon in August and as you walk onto the sand you pass merchants who sell colorful beach cloths with mandalas and other shapes whose provenance might actually be China for all you know. Globalism raises its convenient and ugly head even in far off places, coveted by tourists from England, France, Germany and America who are seeking to get away from it all. As you buy your gelato after a swim, you hear that Beach Boys "Don't Worry Baby," emanating from a radio behind the counter followed by the banter of a Sardinian radio announcer. You go in for one last swim, revisiting the childhood oceanic feeling of not wanting to come out.

Voting Made Easy
Register to vote and apply for an absentee ballot today
Register now
More:
travel
Newsletter Sign Up
An essential daily guide to achieving the good life
Subscribe to our lifestyle email.
Successfully Subscribed!
Realness delivered to your inbox