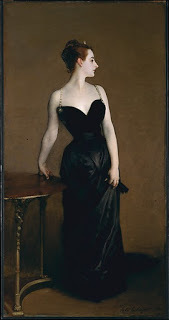 "Sargent: Portraits of Artists and Friends," currently showing at the Met, is a virtual vade mecum of l9th European culture, as seen from the perspective of the great and often quirky transatlantic portraitist. There is Ellen Terry as Lady Macbeth (1889) and a sketch of Yeats (1908). The impressionist style of "Claude Monet Painting by the Edge of a Wood"(1885) shows Sargent's mirror neurons at work. Henry James, whose novels provided a similar, albeit fictionalized portrait of European cultural life, is pictured with his thumb in his coat. Edmund Booth (1890) is the subject of a characteristically "dramatic" portrait. Rodin, who he painted, called him "the Vandyke of our times." The curators point to the fact that his portrait of Madame X (the expatriate Madame Pierre Gautreau), shown bare shouldered in a sensual black gown with silver straps, was deemed scandalous and resulted in Sargent's departure for England. "Dr. Pozzi at Home" (1881) evinces a similar swagger in its use of an ecclesiastical red to capture the estheticism of a renowned gynecologist. But it's the poses that really distinguish these portraits. The current exhibit underscores the connection to Frans Hals' "The Banquet of the Officers of the St. George Civic Guard," (1616) in Sargent's painting of the artists Francois Flameng and Paul Helleu, with Flameng staring straight out and Helleu in profile. Sargent takes a similar tact in the painting of the children of the playwright Edouard Pailleron with Marie-Louise facing out with a look of self-possession that verges on possession and her brother Edouard staring away in distraction. In a "A Dinner Table at Night" (1884) his subject Edith Vickers commands our attention while her husband Alfred's profile is cut short, drifting into oblivion at the edge of the frame. James and Sargent may have admired each other greatly, but looking at the current exhibit one begins to ask who was the novelist and who the painter? They both had similar themes but James painted with words and Sargent wrote novels in oil.