This image, taken during President Obama's recent trip to France earlier this month, has been making its way around the Internet, pointing out Nicolas Sarkozy's vertical challenge among his peers and wife. 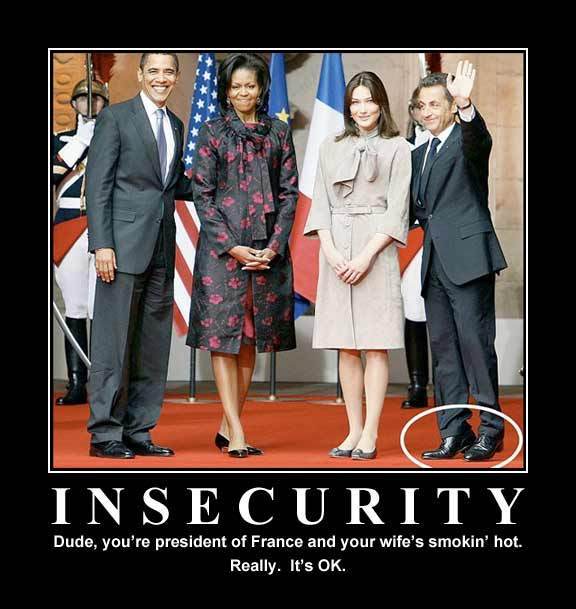 The European media has highlighted the comical height difference -- in addition to their 13-year age difference -- between Sarkozy and his wife. Bruni, who stands at 5'11", has....

...switched from heels to flat-bottom shoes to make up for the shorty, who is 5'5", the British Telegraph newspaper reports.

Sarkozy was in especially tall company in that photo. Barack Obama is 6'1" and his wife is 5'11" -- and to add insult to injury, she was wearing heels.

Earlier this month in an Op-Ed for the New York Times, A. A. Gill characterizes Sarkozy during the G-20 Conference in London:

He is a small man, a Gallic in lifts who can't hide the puffed-up, tip-toe insecurities of his shortness. Almost as if he wanted the world to think he has Napoleon syndrome, he postured and pouted and made arbitrary demands, and drew lines in the sand.