According to The National Center for Fair and Open Testing, there's a disturbing trend in SAT scores in America. The score over all has fallen 20 points, dropping to 1498 in 2012 from 1518 in 2006, six years later. White students' average score has fallen relatively small by 4 points, other ethnic groups have fallen by up to 22 points.

There's one exception, however. Asian American students are scoring higher than ever before, and on the average this population has seen their score rise by a shocking 41 points.

The news does not shock the population that scores the highest, of course. Academic achievements have long been a nourished dream for many Asian Americans, a population in which two out of three are immigrants.

Take my friend H. for example. His first semester at UC Berkeley, H. painted a picture that harked back to a foreign and distant past. In it, a young mandarin in silk brocade and hat, flanked by banner-carrying soldiers, rides an ornate carriage down the road along which peasants stand and watch. 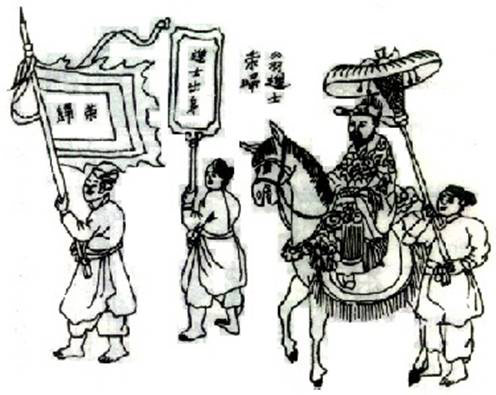 We had just met then, and when he saw me looking at his painting, H. said, "Do trang nguyen ve lang" -- Vietnamese for "Mandarin returns home after passing the Imperial Exam."

But H. didn't need to explain. Like many Asian students from Confucian-bound countries -- Vietnam, Taiwan, Singapore, Korea, Japan, and of course, China -- I could easily decipher the image. In some ways, for us scholarship boys, it is the equivalent of Michael Jordan flying in the air like a god doing a slam-dunk -- a dream of glorious achievements.

H. was driven with an iron will to achieve academic success. While his dorm-mates put up posters of movie stars and sports heroes, the image he drew and hung above his desk was a visual sutra that would help him focus. There was no question of failure. Back home, an army of hungry, ambitious and capable young men and women were dying to take his place, and for H., a boat person who barely survived his perilous journey across the South China Sea, "dying to" was no mere idiomatic expression.

No surprise then that almost three decades after my college days, Asian-Americans dominate higher education.

Though a little more than five percent of the country's population, Asian-Americans typically make up 11 to 30 percent at the America's best colleges. In California, Asians form the majority of the UC system. And at my alma mater, Berkeley -- considered number 3 by Academic Ranking of World Universities (ARWU) global rankings of universities after Harvard and Stanford -- and Asian freshmen population has reached the 43 percent mark this year whereas whites are at 24 percent.

But why is education so deeply ingrained in the Confucian mindset?

Long before America existed, something of the American Dream had already taken place in East Asia, through the system of Mandarin examinations. Villages and towns pooled resources and sent their brightest to compete in the imperial court. Mandarins of various rankings were selected by how well they fared through the extremely rigorous examinations. Those brilliant few who passed were given important bureaucratic duties and it was they who ran the day-to-day operations of imperial court. A mandarin could become governor, a judge, or even marry into the royal family. A peasant thus could rise high above his station, honoring his ancestors and clans in the process. It all hinged on his ability to pass the exams.

The love for education is most self evident in Vietnam's capital. Of all the temples in Hanoi, the most beautiful is arguably the Temple of Literature, where all the laureates who passed the extremely rigorous imperial exams of centuries past and became mandarins had their names etched on stone steles that go back nearly 800 years. Dedicated to Confucius and founded in 1070, it was Vietnam's first university. It eventually became a temple, as if only befitting a trajectory in a world where education is literally worshiped. 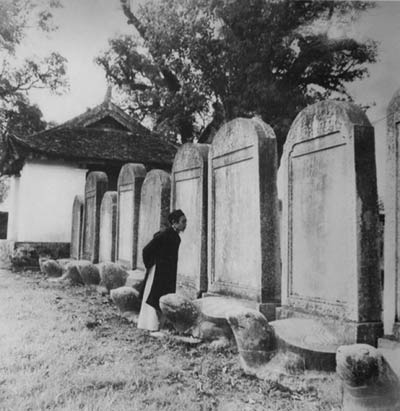 Steles etched with names of Mandarins who passed the exams.

It is such that many Asian parents who work three jobs, who live in two separate continents for the sake of their children, or spend all their savings in order that their children will have chance at a good education. And consequently, their children, sharing a deep sense of filial piety and obligations, they find that they need to honor and fulfill their debt by achieving academic success. Indeed, these dreams of academic success have survived long journeys and refugee camps, and for many they become a reality in America.

That penchant for education hasn't changed a whole lot since the fall of the late Qing dynasty in 1905. If anything it has become intensified because the modern education system in various countries -- but especially in the United States -- has given opportunities to far more people than ever before.

So, on the one hand, Asian America should be proud of their children's academic achievements. On the other hand, it is wise to remember that success in life is far from being achieved simply by doing well on the exams. The danger is that many of us consequently learned to measure the world and ourselves solely through a pedagogic lens. That is, education is so worshiped that not getting good grades often means failing to achieve one's destiny and thereby failing one's own and one's family's expectations, bringing shame and loosing face.

Indeed, what's barely explored, sadly, is the darker narrative, that subterraneous stream that runs parallel to this shining path to academic success. And for those who fail to make the grade, for those who buckled under the academic pressure, there's often a profound identity crisis that often leads to disappointment, depression, and, in some cases, alas, even suicide.

Andrew Lam is the author of "Perfume Dreams: Reflections on the Vietnamese Diaspora," "East Eats West: Writing in Two Hemispheres," and, his latest, "Birds of Paradise Lost," a collection of story about Vietnamese refugees in the Bay Area, which is now available on Kindle.