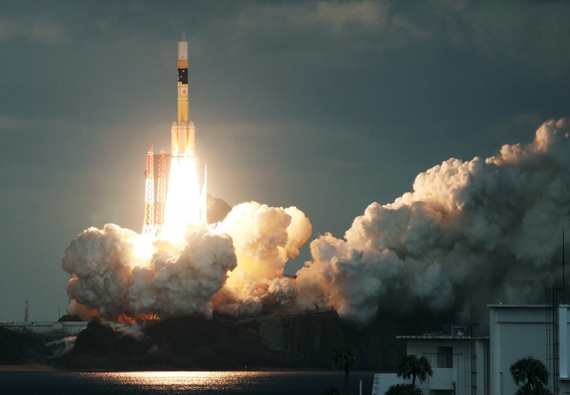 By AsiaToday reporter Jina Koh - The "satellite data" war is heating up in Southeast Asia. It's because they desperately need satellite data to prepare for natural disasters, internet infrastructure construction and more.

Telkom, the largest telecom company in Indonesia, is about to launch a new satellite this month. Dubbed 'Telkom-3S', the $200 million satellite will be supporting Telkom's voice and data services.

Next year, a fourth satellite named Telkom-4 will be ready for launch. The satellite, which will replace the Telkom-1, is equipped with 49 transponders that can transmit 100 Gbps mobile broadband across Indonesia, India and Southeast Asia.

The main purpose of Telkom's satellite launching is to build an internet infrastructure. Indonesia, a nation made up of thousands of islands, is addressing its lack of broadband internet connectivity by building communication infrastructure in space instead of installing cables on the ground.

Satellites can help predict and monitor potential natural disasters such as earthquakes, floods, and volcanic eruptions. They can be very useful tools for managing disasters in near real time.

For this reason, Thailand approved the launch of the second Earth observation satellite THEOS-2 in 2015. The satellite is used for disaster management and infrastructure and earth observation. THEOS-2 will be launched to replace the existing THEOS-1, which ends its five-year mission. The Thai government plans to use the transmitted images of its second satellite by 2020. Vietnam launched its first micro satellite, Pico Dragon, four years ago. The satellite collects space environment data and transmit images to Earth.

Southeast Asia's satellite launching is changing the existing concept of space utilization. "A paradigm shift is happening in the field of space utilization," said Shuzo Takada, director-general of Japan's National Space Policy Secretariat, in an interview with the Nikkei Asian Review.

He explained that reduced costs of manufacturing satellites and launching rockets have changed the way governments think about space development. Launching a rocket and owning a satellite is no longer a national pride.

Instead, practical uses of data gathered from space has become more important. "You should pay attention not only to the traditional hardware aspects, like rockets and satellites, but also the services and software that are connected," said Takada.

In other words, countries that are lagging behind in technology have a chance to become leaders at any time. In particular, Southeast Asia is catching up rapidly in the space development race.

The Philippines is one of the most enthusiastic players in this field. In March 2016, it launched micro satellite Diwata-1 to collect agricultural data.

At an altitude of over 400 km, the Diwata-1 passes four times a day over the Philippines. It captures 3,600 images per day and transmits images and data to the Philippine Earth Data Resources and Observation (PEDRO) Center through its sensor.

The second satellite, Ditawa-2, is expected to be launched at the end of this year or in early 2018. It will be used not only to study other planets but also to monitor weather patterns and climate change to protect the country's natural resources and improve disaster risk management.