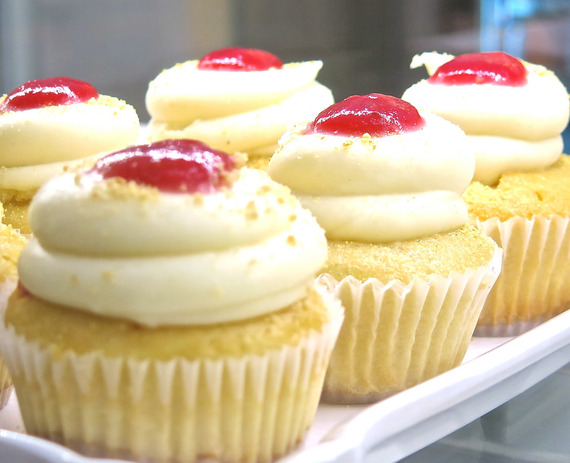 When thinking about some of the great eats in New York City, delis and pizzerias most definitely come to mind. The problem is, you can only have so much pastrami and so many sloppy slices before you begin craving a change of pace. Here are some sweet suggestions for your NYC visit:

Magnolia Bakery
Magnolia has been the bakery hotspot since Carrie Bradshaw devoured one of their delicious pink buttercream icing cupcakes on an episode of Sex and the City. What people don't know is that the banana pudding is actually their showstopper. The creamy, puffy pudding, along with fresh bananas and vanilla wafers will have you saying "What cupcake?" Now with multiple locations around Manhattan, you shouldn't have to wait in line... for too long.

Dylan's Candy Bar
Walking into Dylan's Candy Bar will make you feel like you stepped right into a scene from Willy Wonka. Founded by Ralph Lauren's daughter, Dylan, this store featuring rows and rows of candy ranging from Swedish fish to hard tack to chocolate will certainly give you a sugar rush. If that's not reason enough to feel like "a kid in a candy store", pull out a dollar bill and head to the chocolate fountain where they'll give you your choice of fruit to dip in the velvety chocolate falls.

Serendipity III
A young John Cusack and Kate Beckinsale come to mind when you think Serendipity. The restaurant where they filmed the romantic flick, actually known as Serendipity "III" or "3" was made famous by the sweet love story and is known for their Frrrozen Hot Chocolate, which at one time drew celebs in like Marilyn Monroe, Andy Warhol and Jackie O. This popular location, its rich history and, of course, its dessert, makes the wait for a table worth it. They do not accept "dessert-only" reservations so to avoid waiting too long it's recommended to reserve a table for a full meal.

Ferrara's
Owned and operated by the same Italian family since 1892, this Little Italy gem will instantly have you in a cannoli craze. And if that doesn't suit your fancy, rows and rows of other delicate pastries displayed in their cases certainly will. Enjoy a savory sweet, sip their famous espresso and take in the old-world ambiance and you'll surely feel like you're in a scene from a classic movie.

Baked by Melissa
Cupcakes in New York City have become "a thing" much like pizza. One of the biggest problems when it comes to having one of those hearty cakes, however, is deciding on oh-so-many flavors! If only you could have one bite of each. With Baked by Melissa, you can. Her bite-sized cupcakes in flavors like Peanut Butter & Jelly, Mint Cookie and Chocolate Chip Pancake give you a taste of variety without feeling the guilt.