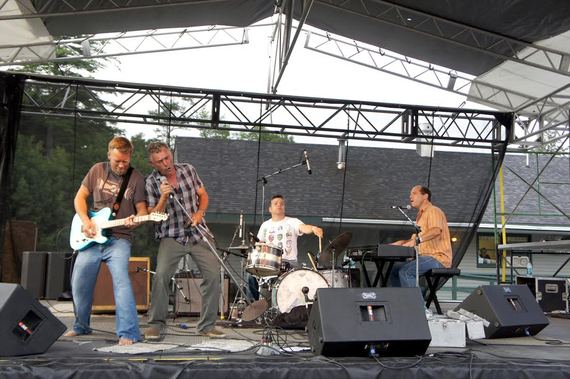 Johnny Hoy and the Bluefish
Photo by Dagney Ernest

On a Saturday night at the Portuguese American Club in Oak Bluffs, Martha's Vineyard, a group of guys quietly enter the building, amps and instruments in hand. No roadies. No pretense, no "look at me we're rock stars," just a group of hard working musicians to do their job which at that moment is to help raise money for a new folk opera, 1854, which is being developed for and about Martha's Vineyard. Hardly a sound check, they begin to play. People at the bar take notice, leaving their alcohol on beautiful mahogany. The hall is still quiet, but out of the crisp June night an audience begins to trickle in. Soon they arrive in earnest filling the club. The band is Johnny Hoy and the Bluefish and they blow the roof off. The play hard driving blues, rock and even the American Songbook and if you don't know what that is, start with a skinny kid named Sinatra and you'll be educated. Nobody announces the band. They just begin to play and play and play and then play some more.

The trickle becomes a flood and the joint is rocking from bar stool to pool hall to the great food people had contributed to the event. Ultimately, through the band's music, joy reigns supreme. People from 20 something to 80 something else(!) get up on the dance floor to shake whatever they have to shake. And this is how the night went. Aided by Kate Taylor's special contribution, the night knows no bounds and for those few hours denizens of this small hard working island forget their burdens and are lifted to the rarified atmosphere of elation.

People in this community normally work two or three jobs just to make ends meet. There is a tradition of hard labor on this spit of land that goes back centuries and although there are seasons of the 1% occupying their beautiful houses, the true nature of the Vineyard is working class. On that Saturday night I saw an 80 something year old woman joyfully brush away a lifetime of struggle as she danced as if no one was watching. That's what Emma Goldman would say. I watched the years drip away from tired bones as Johnny Hoy's music shook their marrow, releasing wave upon wave of laughter. Young people joined with all ages proving once again the only important part of life is one's soul. And it is soul that Johnny Hoy and his band illuminate.

This jewel of a band began playing in 1991. They are well known on the Vineyard and points beyond and every single time they come out of their quotidian lives they transcend any bumps and bruises being human offers. Johnny is a stonemason, farmer and fisherman. There is Jeremy Berlin, keyboardist who can play any genre that floats through his imagination. Then there is Buck Shank, guitarist. Could he have been anything other than a musician with a name like that? Their drummer has left the band and so they pick up one of a myriad of talented drummers on their gifted island. On this glorious late spring night, it is Kevin Begley.

I've seen this group play large and small venues alike. They consistently rock the Kasbah no matter its location or time of day or night. For more than 20 years Johnny and his mates have been doling out unmitigated pleasure, always creating new riffs, new approaches, maintaining their passion as they fly higher and higher bringing their fortunate sons and daughters mothers and fathers along for the ride.

This is life. Johnny Hoy and the Bluefish moves rivers of joy, never looking back always forward not afraid of the heights. They are a blues/rock and roll band and they do it as well as anyone out there. No frills, but plenty of chills. Dance, dance, dance and sooner or later this band will arrive, backbeat aboard.

If you wish to know more about Johnny Hoy and the Bluefish, click here.