Scientists have found yet another tantalizing clue that Saturn's moon Enceladus may have the potential to host alien life: Hot springs.

Yes, new research reveals the first clear evidence that there could be hydrothermal activity in the icy moon's underground ocean. 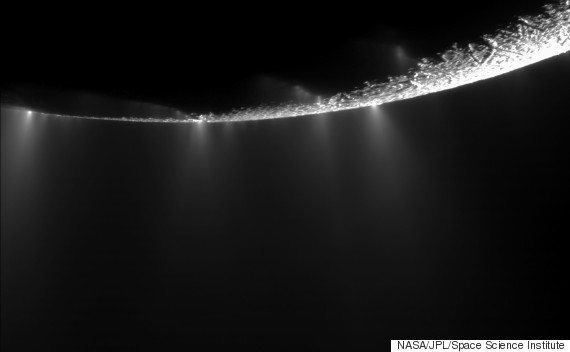 Dramatic plumes on Saturn’s moon Enceladus, as seen by the Cassini probe during its flyby in 2009. 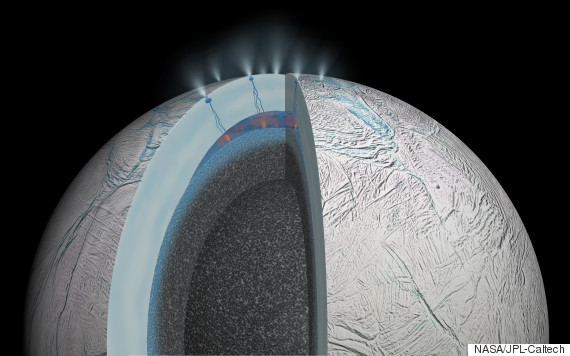 A deep subsurface ocean is thought to exist at the south pole of Enceladus, below a thick ice crust. This artist’s impression shows hydrothermal activity on the ocean floor.

“These findings add to the possibility that Enceladus ... could contain environments suitable for living organisms,” John Grunsfeld, an astronaut and associate administrator of NASA's Science Mission Directorate in Washington, D.C., said in a written statement issued by the agency. “The locations in our solar system where extreme environments occur in which life might exist may bring us closer to answering the question: are we alone in the universe.”

Tiny grains yield their secrets. For the research, an international team of scientists analyzed data on microscopic grains of rock, which were spewed into space by Enceladus's geysers and collected by NASA's Cassini space probe's cosmic dust analyzer (CDA) instrument.

The analysis, along with computer simulations and experiments in the lab, suggested that the silica grains were formed in Enceladus's vast ocean. Scientists discovered this ocean, which is at least as big as North America's Lake Superior, last April.

According to the new hypothesis, minerals from Enceladus's rocky core dissolved in hot water near the seafloor -- estimated to be around 194 degrees Fahrenheit (90 degrees Celsius). As the hot water rose toward the ocean's surface, it cooled, causing the minerals to condense into the tiny silica grains -- just like the ones found in sand and quartz on Earth.

The search for E.T. The new research suggests that Enceladus has three main ingredients needed for life to evolve: water, heat, and nutrients. Just last year, scientists mapped out 101 geysers of water vapor and ice near Enceladus's south pole.

And given that the moon isn't the only one of its kind, this has intriguing implications for the possibility of life elsewhere in the Milky Way.

“Enceladus may even represent a very common habitat in the galaxy: icy moons around giant gas planets, located well beyond the ‘habitable zone’ of a star, but still able to maintain liquid water below their icy surface,” Nicolas Altobelli, a Cassini project scientist, said in a written statement issued by the European Space Agency.

Researchers are eager to examine samples from Enceladus to determine whether life exists there, though that may take years.

"It will take more than 20 years to send a space probe to Enceladus and bring samples back to Earth," Dr. Yasuhito Sekine, an associate professor at the University of Tokyo and one of the researchers behind the new finding, told Reuters. "So we're taking a long breath until we finally get the sample in our hands -- maybe more than 30 years -- but hopefully by the end of this century, we will reach the conclusion."

The research was published online Mar. 11 in Nature.

Saturn's Moon Enceladus May Have Warm Ocean, Boosting Likelihood Of Life On Icy Satellite
Cassini Pictures Of Saturn And Its Moons