While rovers are ideal for exploring Mars, a boat is best for Titan, Saturn's largest moon. Scientists are proposing a new mission to explore this alluring world that would send a floating probe to land in a lake on Titan.

Titan, the largest of the more than 60 natural satellites of Saturn, is covered in seas, lakes and rivers of methane, and hosts a thick atmosphere, making it one of the most Earth-like bodies in the solar system. Smaller than Earth but wider than Mercury, Titan is in many ways more like a planet than a moon.

Scientists don't know if life might be possible on Titan. Some think it's too cold, as average temperatures are a chilly minus 289 degrees Fahrenheit (minus 178 degrees Celsius). Yet others say the insulating atmosphere and plentiful liquids, not to mention a possible subsurface ocean, could be hospitable to microbial organisms.

That's part of the reason researchers are so eager to explore the world, which has been imaged in recent years by NASA's Cassini mission, and was even studied by the accompanying European Space Agency Huygens probe, which plunged through Titan's atmosphere and touched down on land in January 2005, transmitting a few hours of data before it went quiet. [Amazing Photos of Titan] 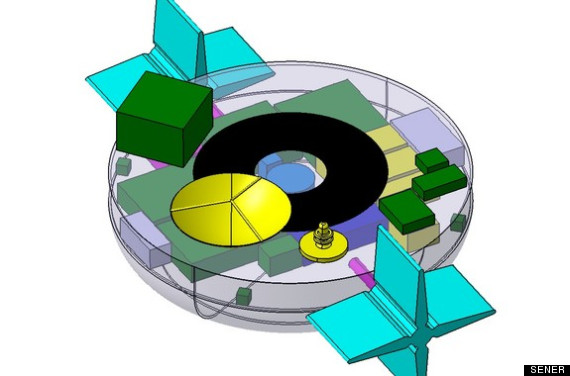 One proposed concept for the TALISE mission imagines a boat propelled by paddles to travel though Titan's largest lake.

Huygens confirmed that lakes, rivers and seas of liquid hydrocarbons abound on Titan. Now scientists want to send a follow-up mission to explore them.

That's where the Titan Lake In-situ Sampling Propelled Explorer (TALISE) comes in. The proposed mission would land a boat, propelled by wheels, paddles or screws, to float around Ligeia Mare, the largest lake on the moon, located near Titan's north pole. After splashing down, TALISE would make its way to the coast over the course of a trip lasting six months to a year.

"The main innovation in TALISE is the propulsion system," Igone Urdampilleta of Spain-based private engineering firm SENER, a member of the TALISE team, said in a statement. "This allows the probe to move, under control, from the landing site in the lake, to the closest shore. The displacement capability would achieve the obtaining of liquid and solid samples from several scientific interesting locations on Titan's surface such as the landing place, along the route towards the shore and finally at the shoreline."

TALISE is a joint project of SENER and the Centro de Astrobiología in Madrid, Spain. The concept is in its beginning stages, but scientists presented the proposal on Sept. 27 at the European Planetary Science Congress in Madrid.