A NASA spacecraft may have witnessed the birth of a new Saturn moon.

Photographs taken by NASA's Cassini probe in April 2013 show a bright arc about 750 miles (1,200 kilometers) long and 6 miles (10 km) wide at the edge of Saturn's outermost ring (known as the A ring). This arc and some strange bumps nearby were probably created by the gravity of a small, icy object —possibly a newborn moon, a new study reports. 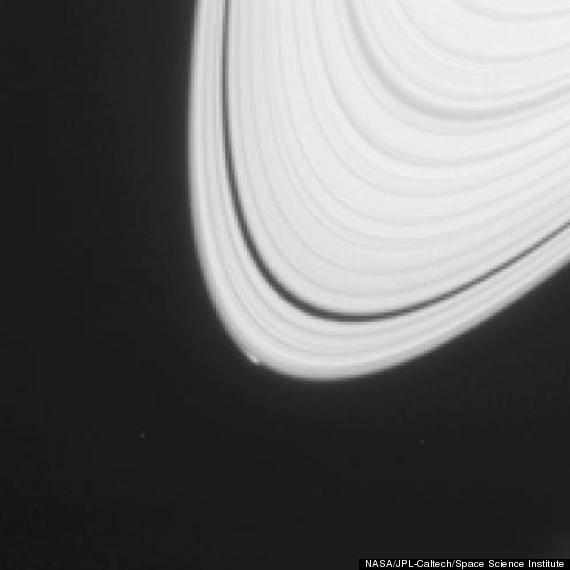 The disturbance visible at the outer edge of Saturn's A ring in this image from NASA's Cassini spacecraft could be caused by an object replaying the birth process of icy moons.

"We have not seen anything like this before," study lead author Carl Murray, of Queen Mary University of London, said in a statement. "We may be looking at the act of birth, where this object is just leaving the rings and heading off to be a moon in its own right." [Photos: Saturn's Glorious Rings Up Close]

The object, which researchers have dubbed "Peggy," is at most 0.5 miles (0.8 km) wide — too small to be seen in images taken by Cassini so far. But the spacecraft will move closer to the A ring's outer edge in 2016, giving reseachers a chance to study Peggy in more detail and possibly even get a picture of the object, NASA officials said.

Saturn has more than 60 known moons. These satellites are quite diverse, ranging in size from the colossal Titan, which is nearly 1.5 times wider than Earth's moon, to tiny iceballs less than 1 mile across.

Scientists think these moons formed from ice particles within the rings (which are composed almost entirely of water ice) and then moved outward, growing by combining with other nascent satellites along the way. Studying Peggy further could help shed light on this process, researchers said, even though the object is probably done growing (and may even be disintegrating).

Peggy offers a unique opportunity, because Saturn may be pretty much done making new moons.

"The theory holds that Saturn long ago had a much more massive ring system capable of giving birth to larger moons," Murray said. "As the moons formed near the edge, they depleted the rings and evolved, so the ones that formed earliest are the largest and the farthest out."

The new study was published online Monday (April 14) in the journal Icarus.

Saturn May Have New Moon Forming In Its Rings (PHOTO, VIDEO)
Saturn 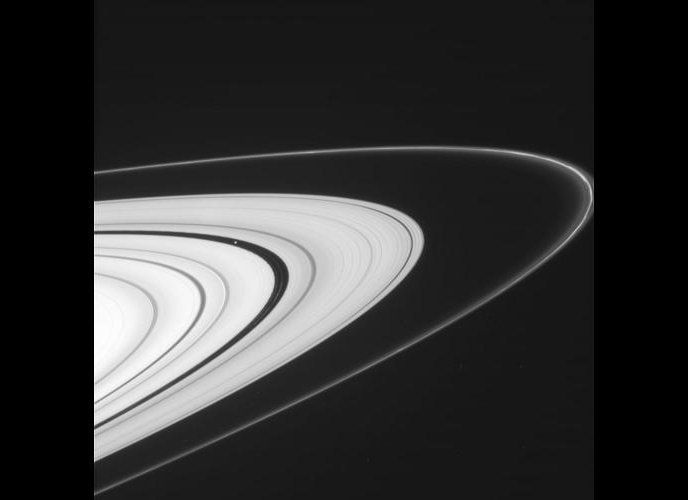 1 / 4
Planetary Rings
NASA's Cassini spacecraft has recently resumed the kind of orbits that allow for spectacular views of Saturn's rings. This view, from Cassini's imaging camera, shows the outer A ring and the F ring. This image was obtained on May 23, 2012.
NASA/JPL-Caltech/SSI