Astronomers were stunned in 2009 when they discovered a gargantuan, never-before-seen eighth ring around Saturn. The "Phoebe ring," as it was dubbed, lies far outside the planet's seven main ring groups and is made of dark particles that make it hard to spot except in infrared light.

Now a new study reveals the ring is even more impressive -- about 30 percent bigger -- than previously thought. It covers an area of the sky that's 7,000 times larger than Saturn itself.

"We knew that the ring was big, but we now know exactly how big it is!" Dr. Douglas P. Hamilton, an astronomy professor at the University of Maryland in College Park and the study's lead author, told The Huffington Post in an email. 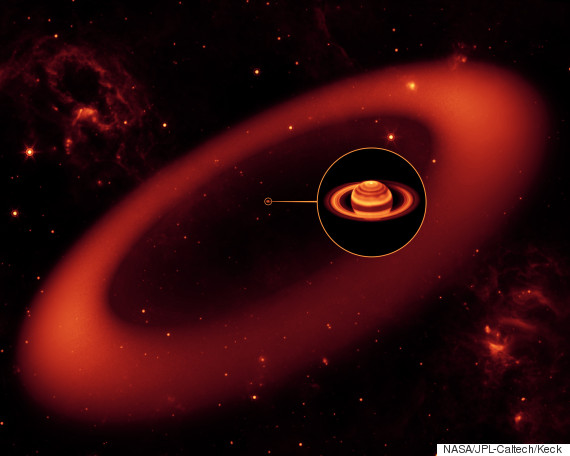 This artist's conception simulates an infrared view of the giant Phoebe ring.

A second look. Back when they first observed the ring, Hamilton and his colleagues could see only a small cross section of it based on data collected by the Spitzer Space Telescope. For the new study, they analyzed images taken by NASA’s Wide-field Infrared Survey Explorer (WISE) spacecraft, which showed the ring in its entirety.

They found that the ring starts at a distance around 100 "Saturn radii," or around 3.7 million miles, from the planet's body. And it extends as far as 275 Saturn radii, which is about 10 million miles.

In other words, if you picture Saturn as the size of a basketball, the ring extends around two thirds of the length of a football field away from it, Science reported.

Sifting the dust. The ring is composed mostly of dust particles no bigger than the width of a human hair. Rocks that are soccer-ball-sized or larger, at least 20 centimeters in diameter, make up no more than 10 percent of the ring -- which is unusual compared to other rings in the solar system.

Where does the dust come from? Previously, scientists believed that it streams off of Saturn's moon Phoebe as the satellite gets pelted by comets. Now scientists believe some of it may come from other "hidden" moons that are too small for our telescopes to see, according to NPR.

"This discovery has shown us that rings are much more diverse than previously thought," Hamilton said in the email. "The textbooks tell us that rings form near planets and moons form further away. What then is a ring doing out at the very edges of the Saturnian system? The solar system is a stranger and more interesting place than we gave it credit for!"

The research was published online on June 10 in the journal Nature.