The dazzling rings of Saturn and its moons are likely more than 4 billion years old — the cosmic remnants of the solar system's birth, scientists say.

The finding comes after a new study of observations from NASA's Cassini spacecraft orbiting Saturn, which suggests that the planet's rings and moons formed at the same time as the rest of the solar system's planetary bodies soon after the sun sparked into life. Since Saturn's rings and moons formed from the same planetary nebula of gas and dust around the early sun that led to the solar system's other planets, they are a time capsule of sorts for astronomers, the researchers said. 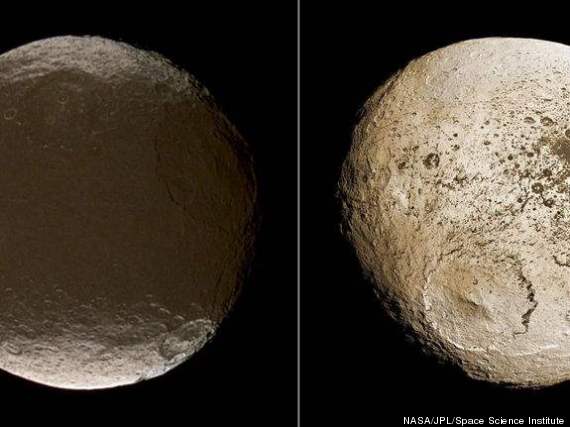 "Studying the Saturnian system helps us understand the chemical and physical evolution of our entire solar system," Cassini scientist Gianrico Filacchione, of Italy's National Institute for Astrophysics in Rome, said in a statement. "We know now that understanding this evolution requires not just studying a single moon or ring, but piecing together the relationships intertwining these bodies."

Filacchione and his colleagues analyzed data from Cassini's visual and infrared mapping spectrometer, or VIMS, to understand the distribution of water ice and colors across Saturn's rings and moons. Different colors in the rings and moons provide evidence of non-water organic materials, while water ice is a vital clue into the timeline that led to the formation of the Saturnian system, the researchers said. [See photos of Saturn's spectacular rings up close]

Observations from VIMS showed that there is too much water ice in the Saturn system to have been dumped there by comets or other more recent means, leading the researchers to conclude that the water ice must have formed around the time the solar system did.

The researchers also discovered that the surfaces of Saturn's moons typically get redder the farther away they orbit the huge planet. Some of these outer moons, like Hyperion and Iapetus, may have been coated with reddish dust shed by Phoebe, a small, retrograde moon believed to have originated in the Kuiper Belt, the researchers said.

Meanwhile, parts of the planet's main ring system may have been painted with a more subtle reddish hue by meteoroids slamming into the Saturnian system. That red may be a sign of oxidized iron (rust) or polycyclic aromatic hydrocarbons, compounds that could give rise to more complex molecules, the researchers said.

The scientists were surprised to observe reddish tones on the potato-shaped moon Prometheus, which orbits in an area where moons are generally more whitish in color. The finding hints that Saturn's rings may have given rise to some of the planet's moons.

"Scientists had been wondering whether ring particles could have stuck together to form moons — since the dominant theory was that the rings basically came from satellites being broken up," study researcher Bonnie Buratti, a VIMS team member based at NASA's Jet Propulsion Laboratory, Pasadena, Calif., said in a statement. "The coloring gives us some solid proof that it can work the other way around, too."

The research is detailed in the March 26 edition of the Astrophysical Journal.

NASA's Cassini spacecraft launched toward Saturn in 1997 and arrived in orbit around the ringed planet in 2004. The spacecraft completed its primary mission in 2008 and is currently in the midst of its second extended mission, which runs through 2017.