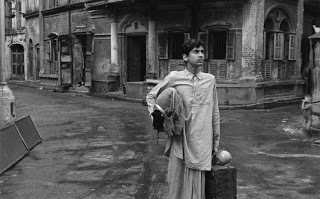 When you see the second of Satyajit Ray's Apu Trilogy, Aparajito (The Unvanquished, 1957), currently being revived in repertoire at Film Forum, you think first of Bergman. Ray was really the Bergman of India; we could also say that Bergman was the Ray of Sweden. Both had no qualms about letting the camera linger in the kind of stasis that is foreign to Hollywood in order to explore the complexity of emotion. Like the first in the trilogy Pather Panchali (1955), Aparajito is really about the development of consciousness and it unfolds as as a series of awakenings. The camera lingers on the face of the mother Sarbojaya Roy (Karuna Bannerjee) as she sees her son through a gate and then you hear the sound of the train which will eventually take them from Benares to their new home. The sound is superimposed in a no man's land between the present and the future. There are other wonderfully touching scenes such as the coins anomalously filling a plate following a spiritual séance conducted by the husband, Harihar (Kanu Bannerjee), an aryurvedic healer and the black birds flying upwards as Sarbojaya gives Harihar his last drink of water. But what distinguishes Ray from Bergman is really the satiric cast of characters who are so reminiscent of Dickens. There's the school teacher (Subodh Ganguli) with his wire-rimmed glasses and books on exotic locales like Africa and the North Pole and Nandu Babu (Charuprakash Ghosh), the owner of the Royal Press where Apu (played now by Smaran Ghosal) both works and lodges when he goes off to Calcutta for school. Apu falls asleep and is expelled during an English class in which his professor (Nemata Chatterjee) says "synechoche is a figure of speech based on association." Later he is comforted by a more worldly classmate who tries to get him to try his first cigarette. But a filmic form of synecdoche, a series of symbolic omens that one might find in a bildungsroman like David Copperfield is really what Ray is up to in this coming of age in Bengal. "Benares is a nice place except for the monkeys," Harihar intones before he succumbs to the illness that will kill him.