SANAA, March 31 (Reuters) - Warplanes from the Saudi-led coalition have stepped up raids on Houthi targets around the Yemeni capital Sanaa, residents say, forcing many to flee their homes and spreading fear and anger among a population already wearied by years of unrest.

A strike early on Tuesday near Sanaa airport blew a large crater in a group of five houses, witnesses said. There were no casualties, suggesting the buildings had been empty since a deadly raid in the same area last week. 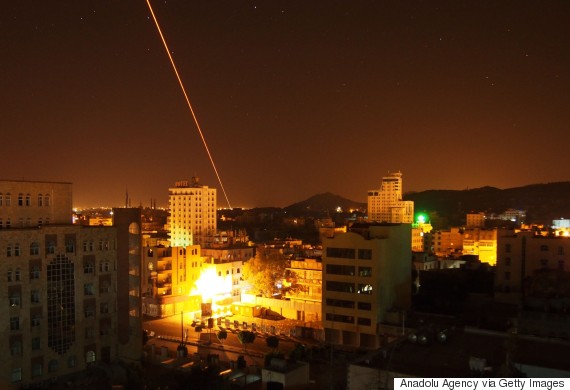 Another attack in the mountains just outside the city appeared to hit a missile depot overnight, sparking a fire which raged for several hours and heralded another sleepless night for Sanaa's civilians.

"I moved my wife and my child from Sanaa to our village because we are frightened by the strikes," said Mohammad Abdu, an engineer in his 30s. "We cannot sleep because of the intensity of the bombardment."

Saudi Arabia, backed by regional Sunni Muslim allies, launched air strikes on Thursday against the Shi'ite Muslim Houthis, an Iran-allied group which took over Sanaa in September and launched a military offensive in the south which has forced President Abd-Rabbu Mansour Hadi flee the country. 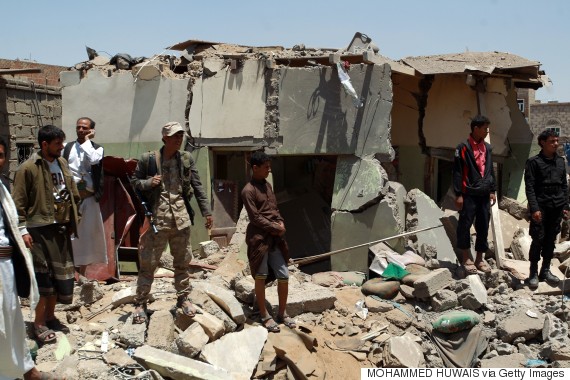 Yemenis gather near the rubble of houses near Sanaa Airport on March 31, 2015. (MOHAMMED HUWAIS/AFP/Getty Images)

In the opening stages of the offensive, warplanes struck at night. But residents said the attacks on Monday continued throughout daylight hours, perhaps reflecting growing confidence that the Houthis are unable to hit the jets.

The increasing attacks have taken their toll on the city of more than 2 million, where schools are closed and workers have show up only briefly at their offices before heading home.

"They are staying at home, especially those with children. People are only going out for vital things," said one resident. "Every day, hundreds more people head for rural areas" for safety, he said.

Mohammad Hakimi, a doctor, has stayed in Sanaa but moved to a less dangerous district. "My family and I left home and moved to a relative's house. I live near a government building which has anti-aircraft guns and I was afraid of the bombing." 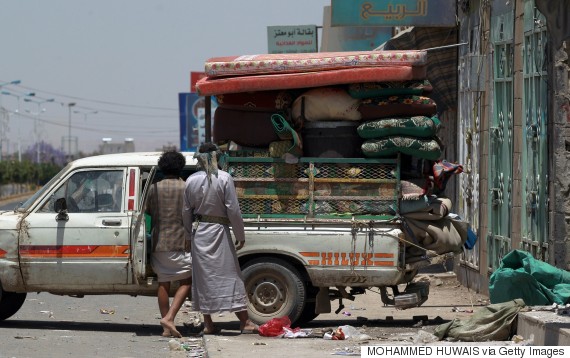 Yemenis pack their belongings into the back of a truck in Sanaa on March 31, 2015, as they flee the capital. (MOHAMMED HUWAIS/AFP/Getty Images)

Houthi officials have not provided details of casualties in Sanaa, but a local rights organization said 29 civilians were killed in one strike near the airport on the first day of the offensive.

Residents have already witnessed years of turmoil in the capital, an urban sprawl which encircles an ancient old city and is ringed with mountains.

The 2011 Arab uprisings brought months of protests to Sanaa, leading President Ali Abdullah Saleh to step down after more than three decades of rule. Six months ago, exploiting the chaos which followed his downfall, the Houthis took over.

Even some Yemenis who oppose the Houthis would prefer to live under their rule than endure the continued attacks. 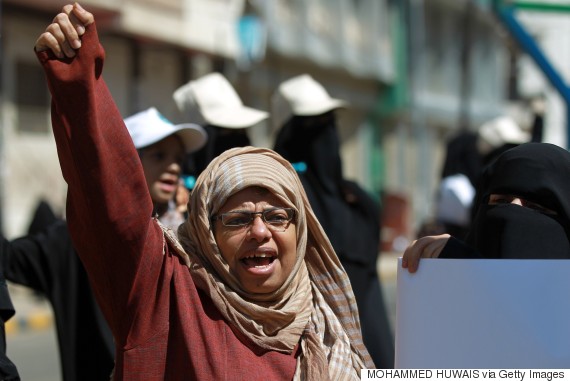 A Yemeni woman shouts slogans during a rally against airstrikes in Sanaa on March 31, 2015. (MOHAMMED HUWAIS/AFP/Getty Images)

"Despite my hatred for the Houthis and the former president, in the end they are Yemenis," said Fatima Aghbari, a political activist. "That's why I'm against the raids. Saudi Arabia is malevolent to Yemen and its people."

"All we hear is Saudi strikes ... But the Houthi bases are still there and Saleh is still there, which makes us say that Saudi Arabia's goal is bigger than fighting the Houthis - it's to destroy the Yemeni army."

After nearly a week of military operations, Saudi Arabia says it is open to talks to resolve the conflict on condition that they be under auspices of the six-member Gulf Cooperation Council, all but one of which support the Saudi-led assault.

Despite the growing civilian cost from the hostilities, that message still had a sympathetic hearing from some in Sanaa.

"The former president of Yemen who destroyed the country for 30 years and handed the capital over to the Houthis and gave them weapons to attack the south - he is the reason for the bombardment today," said government employee Faisal Abdullah.

Another resident, Mohammed Ali, echoed his comments, saying accumulated years of misrule meant there was no alternative to war. "All those oppressed in Yemen by Houthi injustice and by Saleh support (it) because there is no other solution." (Writing by Dominic Evans, editing by Peter Millership)