(Reuters) - Warplanes from Saudi Arabia and Arab allies struck Shi'ite Muslim rebels fighting to oust Yemen's president on Thursday, a gamble by the world's top oil exporter to check Iranian influence in its backyard without direct military backing from Washington.

Riyadh's rival Iran denounced the assault on the Houthi militia group, which it backs, and made clear the kingdom's deployment of a Sunni coalition against Shi'ite enemies would complicate efforts to end a conflict likely to inflame the sectarian animosities fuelling wars around the Middle East.

Warplanes bombed the main airport and the nearby al Dulaimi military air base of the Houthi-held capital Sanaa, residents said, in an apparent attempt to weaken the Houthis' air power and ability to fire missiles. 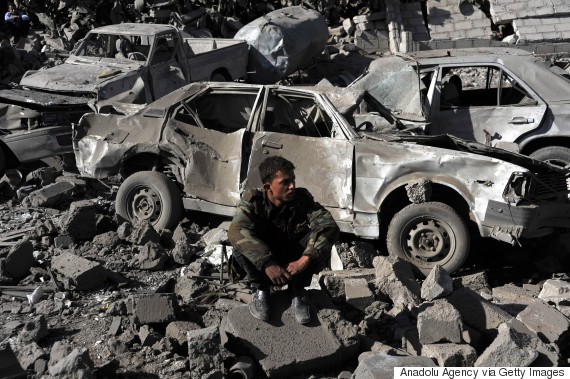 A Reuters witness in the capital said four or five houses near Sanaa airport had been damaged. Rescue workers put the death toll from the air strikes at 13, including a doctor who had been pulled from the rubble of a damaged clinic.

"We will do whatever it takes in order to protect the legitimate government of Yemen from falling," Saudi Arabia's ambassador to the United States, Adel al-Jubeir, told a news conference in Washington.

In Aden, a local official reported that fighters loyal to Hadi retook the airport, a day after it was captured by forces allied to the Houthis advancing on the city. The facility remains closed and flights are canceled.

Saudi-owned al-Arabiya TV reported that the kingdom was contributing 100 warplanes to the operation - dubbed "Storm of Resolve" - and more than 85 more were provided by the United Arab Emirates, Qatar, Bahrain, Kuwait, Jordan, Morocco and Sudan.

Egypt, Jordan, Sudan and Pakistan were ready to take part in a ground offensive in Yemen, the channel said.

A Saudi official familiar with defense matters told Reuters that a "land offensive might be needed to restore order." 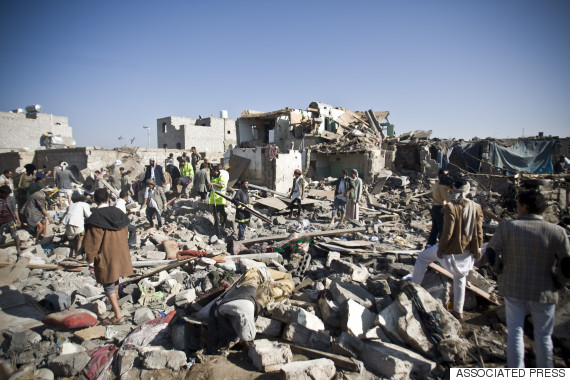 People search for survivors under the rubble of houses destroyed by Saudi airstrikes near Sanaa Airport in Yemen. (AP Photo/Hani Mohammed)

Meanwhile, Iran's Foreign Ministry on Tuesday demanded an immediate halt to the "aggression and air strikes" in Yemen, the semi-official Fars news agency reported on Thursday.

"The strategic change in the region benefits Iran and we cannot be silent about the fact that the Houthis carry their banner," UAE Minister of State for Foreign Affairs Anwar Mohammed Gargash wrote on Twitter.

The other Arab countries along with Pakistan reported to be willing to take part in the operation are also mostly Sunni.

Saud al-Sarhan, director of research at King Faisal Center for Research and Islamic Studies in Riyadh: “It is a clear message on the ‘Saudi defense doctrine’. Security and stability in the Arabian Peninsula is a red line, and Saudi Arabia doesn’t tolerate any attempt to destabilize the region." 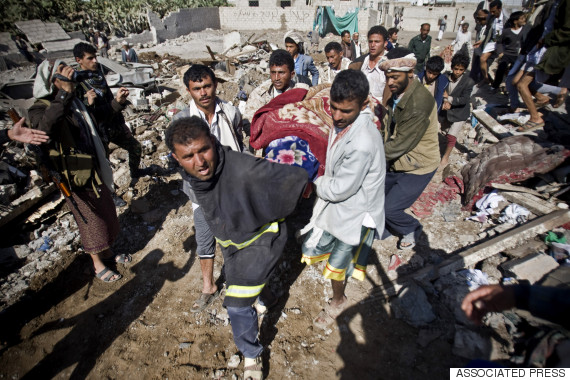 People carry the body of a woman found under the rubble of a house destroyed by Saudi airstrikes. (AP Photo/Hani Mohammed)

Yemen's slide towards civil war has made it a crucial front in Saudi Arabia's rivalry with Tehran, which Riyadh accuses of stirring up sectarian strife throughout the region and in Yemen with its support for the Houthis. Iran publicly denies funding and training the Houthis.

Fighting has spread across Yemen since last September, when the Houthis seized Sanaa and began to fan out across the country, forcing Hadi out of the capital.

Ambassador Jubeir said the assaults had been launched in response to a direct request by Hadi, who supported Washington's campaign of drone strikes against al Qaeda's Yemen branch.

The White House said the United States supported the operation, led by the Arab Gulf Cooperation Council countries, and that President Barack Obama had authorized U.S. "logistical and intelligence support".

The Saudi-led strikes in Yemen coincided with an escalation of American involvement in Iraq, where U.S. planes carried out air strikes to support the drive to oust Islamic State militants from Tikrit.

Hadi has been holed up Aden with loyalist forces since he fled Houthi custody in February.

One of his aides said Hadi remains in the city was "in high spirits" since the operation began. An Aden official later said Hadi loyalists had retaken the southern city's airport after heavy clashes.

A senior leader of Yemen's Houthi movement said the Saudi air strikes amounted to aggression against his country and warned they would set off a "wide war" in the region.

Houthi-run al-Masirah television reported that the Saudi-led air strikes had hit a residential neighborhood north of Sanaa and caused dozens of casualties. It also urged medical personnel to report to hospitals in Sanaa immediately.

Al-Masirah footage showed the body of a girl and several of the wounded, including an unidentified man who wept as he said the air strikes had killed his son and destroyed his home.

It interviewed one witness who said: "We tell Saudi Arabia, don't you have enough with what's happening in Syria and Iraq. You want to do the same in Yemen? Why are you hitting Yemeni civilians, women and children."

No independent verification of any casualties was immediately possible.

Most oil tankers from Arab producers such as Saudi Arabia, the United Arab Emirates, Kuwait and Iraq have to pass Yemen's coastlines via the narrow Gulf of Aden in order to get through the Red Sea and Suez Canal to Europe.