WASHINGTON -- Turkey and Saudi Arabia, two nations with a long history of rivalry, are in high-level talks with the goal of forming a military alliance to oust Syrian President Bashar Assad, according to sources familiar with the discussions.

The talks are being brokered by Qatar. As the partnership is currently envisioned, Turkey would provide ground troops, supported by Saudi Arabian airstrikes, to assist moderate Syrian opposition fighters against Assad's regime, according to one of the sources.

President Barack Obama was made aware of the talks in February by the emir of Qatar, Sheikh Tamim Bin Hamad al Thani, during the emir's visit to the White House, one source said. A White House spokesperson declined to comment.

The administration has generally encouraged Persian Gulf countries to step up and do more on their own to promote regional security, particularly in Syria, but such talk has largely remained just talk. It's unclear whether this case will be different, but Saudi Arabia's recent intervention in Yemen indicates the nation is becoming bolder with its own forces, rather than relying on proxies.

Following his meeting with the emir of Qatar, Obama said that the two leaders had "shared ideas" for how to remove Assad.

“We both are deeply concerned about the situation in Syria," Obama said. "We’ll continue to support the moderate opposition there and continue to believe that it will not be possible to fully stabilize that country until Mr. Assad, who has lost legitimacy in the country, is transitioned out."

“How we get there obviously is a source of extraordinary challenge, and we shared ideas in terms of how that can be accomplished,” he added.

Since those remarks, the United States has continued daily airstrikes against Islamic State targets in Syria and modest training programs for vetted members of the Syrian opposition -- but has not publicly offered any strategy for how to negotiate an end to Assad’s rule.

If the talks between Turkey and Saudi Arabia proceed successfully, their intervention in Syria would go forward whether or not the U.S. offered support, said one source involved in the talks.

Oubab Khalil, chief of staff to the Washington office of the National Coalition of Syrian Revolution and Opposition Forces, welcomed the news. He told HuffPost he hoped the talks would shift the momentum on the ground in favor of the Syrian opposition and force the regime back to the negotiating table.

“We have been honest," Khalil said. "The end goal for us is to preserve state institutions, the unity of the country and a secular, democratic, pluralistic country -- without Assad.”

Turkey's military is one of the most dominant in the region. Saudi Arabia is eager for Turkey's aid in stabilizing parts of Syria, backing the non-Islamic State opposition and putting pressure on Assad to negotiate an end to Syria’s civil war that includes his own departure.

The Turks generally support the removal of Assad, but have said that as a non-Arab nation, they are unwilling to take a greater role in Syria without expanded intervention by Saudi Arabia, a Sunni Arab power. Turkey’s leadership has criticized the U.S.-led coalition striking Islamic State targets in Iraq and Syria for its refusal to also go after the Syrian regime.

Saudi Arabia recently demonstrated its willingness to intervene militarily in the region by leading a coalition of Arab nations in launching airstrikes against the Shia Houthi rebels in Yemen. While the U.S. did not participate directly, American officials said the U.S. provided logistical and intelligence support to the mission.

There have been previous indications that Turkey and Saudi Arabia were discussing a cooperative effort in Syria. On March 2, Turkish President Recep Tayyip Erdogan and Saudi Arabia’s King Salman bin Abdul-Aziz Al Saud Salman, met in the Saudi capital of Riyadh, where they announced an agreement to jointly boost aid to the Syrian opposition and broaden overall cooperation on defense and security matters.

The latest news of high-level talks, however, is the first indication of direct military participation against Assad by either country.

Erdogan has taken a number of steps to suggest that he is preparing to deploy ground troops to Syria. Weeks after he met with the Saudi king, the Turkish leader signed a defense deal with Qatar to facilitate intelligence sharing, military cooperation and possible deployment of Turkish and Qatari troops in one another's countries. This agreement builds upon a joint training deal the two countries signed in 2012, and positions Qatar well to mediate the discussions between Turkey and Saudi Arabia.

Osman Taney Koruturk, the main representative of the leading Turkish opposition Republican People’s Party (CHP) on Turkey’s foreign affairs committee, is concerned that Turkish ground troops could soon be in Syria. He and other opposition members on the committee expressed this concern during official talks over the deal, and later in a press conference after it was signed by the committee on March 2, according to documents obtained by The WorldPost. The deal was then sent to the Parliament and Erdogan to be signed.

The ongoing rapprochement also includes a softening of Saudi Arabia's hostility toward the Muslim Brotherhood, a key sticking point for Turkey.

Aaron Stein, a Turkey expert at the London-based Royal United Services Institute, said that the March meeting between Erdogan and Salman "took place because Salman has a different point of view on the Muslim Brotherhood” than his brother, who previously held the Saudi throne.

According to Stein, Salman has led a strategic shift to align his country more closely with Turkey and Qatar on Syria policy, with a focus on uniting Islamist fighters to battle both the Syrian regime and Islamic State extremists.

“He may dislike [the Muslim Brotherhood]," Stein said of the Saudi king, "but he has realized that the war against them was dividing the Arab world, and preventing unity on key Saudi foreign policy goals like rolling back Iran and defeating Assad -- which the Kingdom views as being one and the same.”

Riyadh and Ankara have shared the goal of arming Assad's opposition since the early days of the Syrian civil war, which has now been going on for four years. But relations between the two Gulf powers have frayed as they have repeatedly found themselves on opposite sides of other regional conflicts.

Saudi Arabia lauded the move as a crackdown on terrorism and promised to compensate Sisi for any military or economic aid withheld by the U.S. and the European Union in response to the coup.

Turkey, meanwhile, condemned Sisi’s actions as an affront to democracy and promptly canceled a scheduled military exercise with the Egyptian military. Erdogan personally welcomed exiled members of the Muslim Brotherhood, which was declared a terrorist organization under Sisi, into Turkey. Within weeks of the coup, Ankara and Cairo recalled their respective ambassadors in one another's countries.

Saudi-Turkish tensions deepened the following summer during the war between Israel and Hamas in the Gaza Strip.

Saudi Arabia, along with Egypt, Jordan and the United Arab Emirates, refrained from publicly criticizing Israel's airstrikes and eventual invasion of Gaza. In July 2014, Egypt drafted a cease-fire proposal that many believed was conspicuously favorable to Israel and failed to address Hamas’s key demand -- that Israel lift the blockade of Gaza it imposed in 2007. Saudi Arabia threw its support behind the Egyptian proposal.

But Erdogan characterized the Gaza war as “genocide by Israel” and publicly questioned the legitimacy of Egypt's cease-fire initiative.

“Sisi is not a party to this. He himself is a cruel perpetrator of a coup. He has blocked Hamas’ access to food and aid by closing the roads to Gaza,” Erdogan told reporters in July, referring to Sisi's closure of the Rafah crossing that connects Egypt to Gaza.

More recently, Saudi Arabia and Egypt teamed up to punish Erdogan for his support of the Muslim Brotherhood and Hamas by leading the lobbying effort to block Turkey from becoming a non-permanent member of the U.N. Security Council.

However, Saudi's long-standing opposition to the Muslim Brotherhood has now become more complicated, largely as a result of the country's increased involvement in Yemen. In the fight against the Houthi rebels in that country, the Brotherhood represents an organized Sunni force, a possible Saudi ally on the ground.

Egypt continues to view the Brotherhood as the equivalent of al Qaeda and has embarked on a campaign of repression against political Islam in general. The Saudis' willingness to work with the Brotherhood in Yemen -- and with Turkey in Syria -- could create a rift between the Kingdom and Egypt.

Any joint intervention in Syria by Saudi Arabia and Turkey is unlikely to ramp up until after an upcoming meeting at Camp David this spring between Obama and the heads of state of the Gulf Cooperation Council -- Bahrain, Kuwait, Oman, Qatar, Saudi Arabia and the United Arab Emirates. Obama will try to sell Gulf skeptics on the merits of the pending nuclear deal with Iran and discuss cooperation on the conflicts in Syria and Yemen.

Some observers believe that the unlikely cooperation between Saudi Arabia and Turkey has been spurred in part by the perception that Iran and the U.S. are moving closer together.

Beyond the nuclear framework agreement that Iran reached with six world powers earlier this month, Iran-backed forces and the U.S. have also been in a tacit alliance against the Islamic State in Iraq. By propping up Shiite militias there, Iran has played a major role in the effort to retake Iraqi territory from the militant group.

"It’s an alliance that’s being forced by the perceived success of the Iranians,” said Firas Abi Ali, a Middle East senior manager at the risk analysis firm IHS, referring to the rapprochement between Saudi Arabia and Turkey on the issue of Syria.

Ali added that without international sanctions, Iran would likely be doing even more to help Assad.

“Iran has been engaged in Syria with one hand tied behind its back as a result of the sanctions," he said. "Without that constraint, the perception among the Sunni states -- Turkey and Saudi Arabia -- would be that they need to contribute significantly more to match what they fear will be an increased Iranian commitment."

The de facto alliance between the U.S. and Iran is leading some in the Sunni-dominated Gulf region to conclude that they may need militias of their own.

“We are starting to see the actors feeling sufficiently threatened," said Ali, again referring to Turkey and Saudi Arabia, "which makes their actions less predictable -- and makes them willing to take risks that would have previously been seen as excessive -- that would now been seen as necessary for self-preservation."

"If the only way to get the U.S. to go along with us is to show our teeth, we will show our teeth," said one Gulf source. "And Sunni teeth are wild."

If you enjoyed this story, sign up below to get my newsletter, Bad News, in your inbox. I send it once a day or so 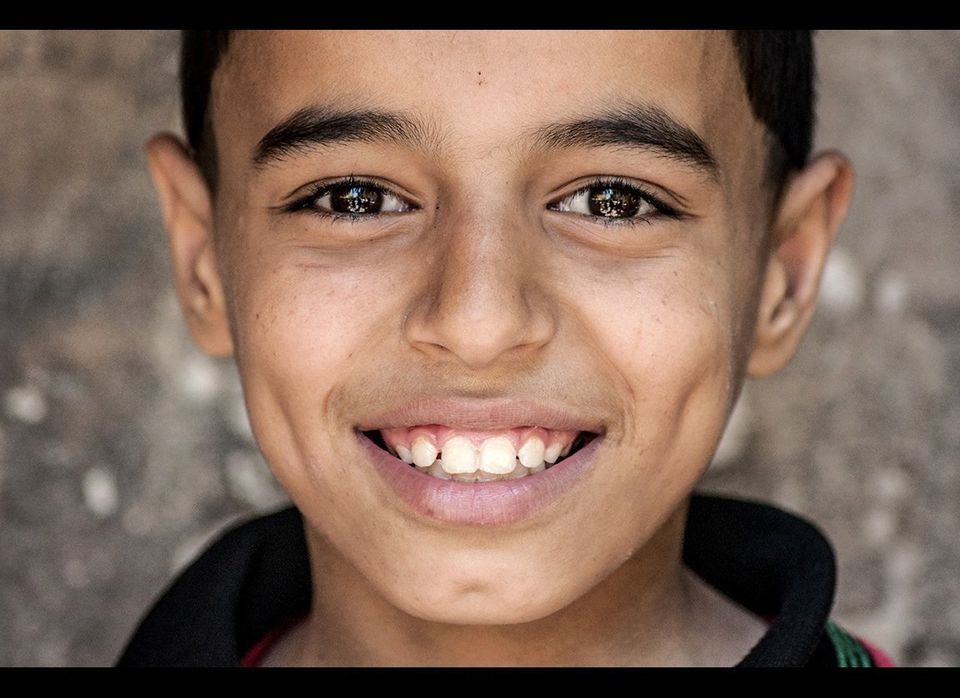