Residents reported heavy clashes between the Houthis and mainly Sunni tribal fighters in the south of the country, while the air campaign sought to stall a fresh offensive by the Shi'ite Muslim group on Aden from the east.

Riyadh's intervention, a surprise move from a conservative monarchy better known for flexing its muscle in oil markets than through military might, is planned to last a month but could extend for five or six, a Gulf diplomatic source said.

He said satellite imagery had shown in January that the Houthis had repositioned long-range Scud missiles in the north, close to the Saudi border and aimed at Saudi territory. A Yemeni official said Iran, which says it has not armed the Houthis, was providing parts for the missiles. 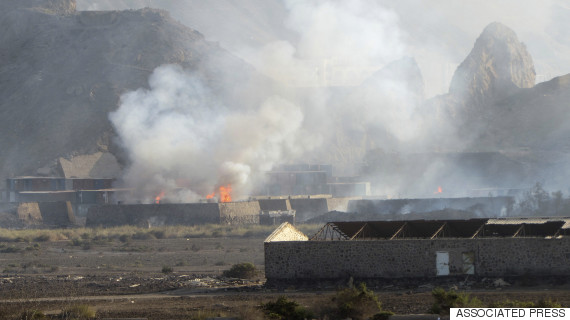 Eighty-six foreign diplomats and Saudi nationals were shipped out of Aden to the Red Sea port of Jeddah, a Saudi military officer said, escaping the city where President Abd-Rabbu Mansour Hadi had taken refuge until Thursday, when he left for Egypt to shore up Arab support for his crumbling authority.

The director general of Yemen's Health Ministry, al-Khadher Laswar, said more than 62 people had been killed and 452 wounded in the city since Wednesday. Explosions at Aden's largest ammunition depot on Saturday wounded nine people, he said.

In the capital Sanaa, which has been under Houthi control since September, the United Nations said most of its 100 international staff were evacuated. Airport officials said dozens of other foreigners working for international oil companies and NGOs also flew out to Ethiopia and Djibouti.

Houthi fighters seeking to overthrow the Western- and Saudi-backed Hadi have continued to make gains since the Saudi-led coalition launched air strikes against them on Thursday.

On Friday, the Houthis and allied army units gained their first foothold on Yemen's Arabian Sea coast by seizing Shaqra, 100 km (60 miles) east of Aden, allowing them to open a new front to march on the south's main city.

Residents said a Houthi convoy of armored vehicles, tanks and military trucks heading along the coastal road to Aden from Shaqra was attacked by warplanes before dawn on Saturday, and a number of vehicles were hit.

Local residents said the convoy had been stopped, but the Houthis were sending reinforcements to Shaqra and the advance along the main al-Mukalla-Aden road was expected to resume.

At an Arab summit in the Egyptian resort of Sharm el-Sheik, Hadi urged Yemen's army to protect state institutions and obey the orders of Yemen's "legitimate leadership."

He also underlined the regional dimensions of the conflict, calling the Houthis "Iran's puppet." 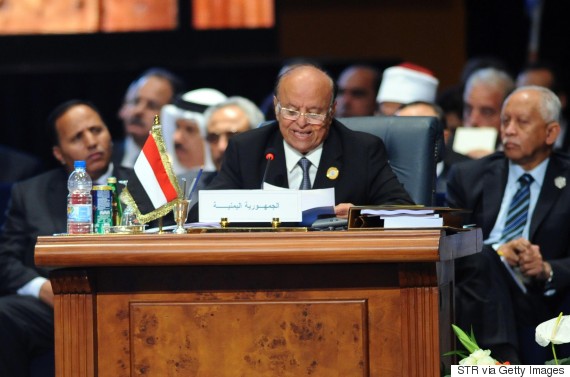 Saudi Arabia's intervention is the latest front in its widening contest with Iran for power in the region. Their proxy struggle is also playing out in Syria, where Tehran backs Bashar al-Assad's government against mainly Sunni rebels, and Iraq, where Iranian-backed Shi'ite militias are playing a major role.

After the summit, Hadi flew with King Salman to Riyadh, rather than trying to return to Aden. Yemeni Foreign Minister Riyadh Yaseen said he would remain in an Arab capital until conditions allowed his return.

Iran has denied giving the Houthis military support, but Alaeddin Boroujerdi, head of the Iranian parliament's national security and foreign policy committee, added to the sense of confrontation, saying: "Saudi Arabia is too small to be able to threaten Iran" and condemning what he described as a Saudi attack on Yemen.

A Gulf diplomatic source, speaking on condition of anonymity, said the Arab alliance initially planned a month-long campaign, but it could last up to six months.

The source said Yemen's military had about 300 Scuds, the bulk of them believed to be in the hands of the Houthis and allied military units loyal to former president Ali Abdullah Saleh, and that the campaign so far had destroyed 21 of them.

A spokesman for the Saudi-led operations said the air strikes had destroyed most of the Houthis' ballistic missile capabilities, but gave no details.

A Yemeni official in Sharm el-Sheik said Yemeni authorities had received information that Iranian experts had brought in parts for long-range missiles held at a base south of Sanaa. He said the air strikes had targeted these missiles, some of which had been pointing towards Aden or neighboring countries. 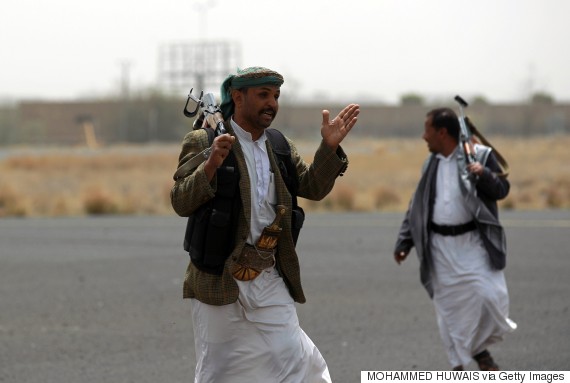 Armed members of Shiite Houthi militia walk on the tarmac of the Sanaa International Airport in Sanaa, on March 28, 2015. (MOHAMMED HUWAIS/AFP/Getty Images)

In the northern city of Saada, a Houthi stronghold near the Saudi border, witnesses said a power station was knocked out by the air strikes. The local prison director also said more than 400 prisoners escaped when their jail was hit.

Yemen, by far the poorest country on the Arabian peninsula, has struggled to regain stability since mass protests in 2011 that eventually unseated Saleh after 33 years in power.

Hadi led a U.N.- and Gulf-backed national dialog that was discussing a new constitution when the Houthis took the capital and pushed him aside. The Gulf official said the aim of the Saudi-led intervention was to restore that process, and that the Houthis could have a role in it.

In comments addressed to Arab heads of state meeting in Cairo, Saleh called on the coalition to stop "the aggression and return to the negotiating table," saying Hadi had failed to run the country.

"Let's go to dialog and elections, and I promise you that neither I nor any of my relatives will run for the presidency," he said. "Air strikes against Yemen have no justification except Hadi's failure to manage the state. I hope the brothers will not bet on a losing horse."