The signers urge that swift and energetic actions be taken to save the monarch butterfly from the threats that endanger its survival. All three countries must work together to mitigate the loss of the butterflies' breeding habitat and to terminate all logging and mining in the Monarch Butterfly Biosphere Reserve in Michoacan, Mexico. 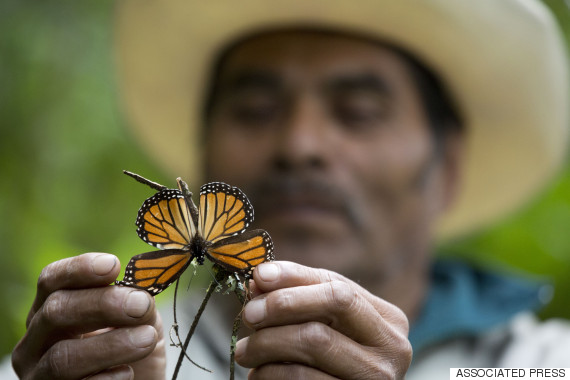 A guide holds up a damaged and dying butterfly at the monarch butterfly reserve in Piedra Herrada, Mexico, on Nov. 12, 2015. (AP Photo/Rebecca Blackwell)

"Our governments will establish a working group to ensure the conservation of the Monarch butterfly, a species that symbolizes our association."

The three heads of state were responding to the deep concern expressed in a letter signed by several hundred international monarch experts, scientists, writers and artists; the letter urged these leaders to address the future of the monarch butterfly and recommended the creation of a recognized breeding corridor along the monarch's migratory route through Canada, the United States and Mexico. High Level Monarch Working Groups were then established in each country; national and trinational meetings are being held; and research and monitoring of monarchs have continued.

The need for effective action has become even more critical.

Conservation activities to protect the monarch butterfly are underway in all three countries, but the need for effective action has become even more critical. Earlier this year, a group of scientists predicted that "the Eastern migratory population has a substantial probability of quasi-extinction," warning that this population must increase to at least 225 million to reduce the risk of extinction by half and to prevent the loss of a viable migratory population. The overwintering abundance of monarchs has shown a 20-year decline from 900 million in 1996-97 to 33 million in 2013-14. Although optimal weather conditions on the migratory route enabled the population to recover to 140 million during the winter of 2015-16, a severe and unusually late March storm reduced this winter's abundance by up to 50 percent, illustrating the risk to survival of a diminished monarch migratory phenomenon.

In the U.S., a June, 2014, Presidential Memorandum established a Pollinator Health Task Force, and the Task Force launched the National Strategy to Promote the Health of Honey Bees and Other Pollinators on May 19, 2015. One of the stated goals of the Strategy is to "increase the Eastern population of the monarch butterfly to 225 million butterflies occupying an area of 6 hectares in the overwintering grounds in Mexico, through domestic/international actions and public-private partnerships, by 2020."

A principal cause of the 90 percent plunge in monarch numbers over the last 20 years is the massive use of glyphosate herbicides on land in the U.S. corn belt planted with genetically modified herbicide-resistant soybean and corn crops. Extensive spraying of these crops in the major summer breeding area of these butterflies has decimated milkweed, which is the only foodplant that monarch caterpillars can eat. New generation crops are being developed to resist additional herbicides, so the threat to milkweeds is increasing.

Concern about declining milkweed habitat led to a petition being submitted to the U.S. Fish and Wildlife Service on August 26, 2014, requesting that the monarch butterfly be listed as threatened under the U.S. Endangered Species Act. The petition described the urgent need for federal protection; consideration of the petition is underway. 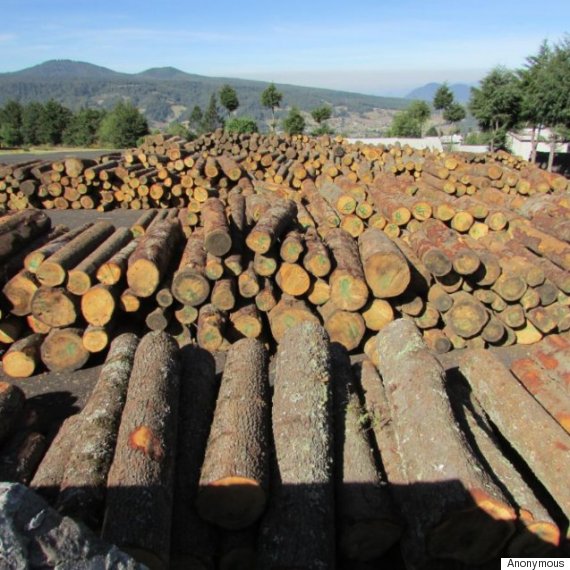 This shows the logging that took place in the Monarch Butterfly Biosphere Reserve after the March storms. For safety reasons, the photographer wishes to remain anonymous.

In Mexico, degradation of the overwintering sites continues despite official assurances that illegal logging is under control. Recently, scientists have confirmed that 10 hectares of mature forest on land belonging to the state of Michoacan were severely logged in 2015. Observers have also found small-scale logging in the Reserve, with both forms of logging damaging the protective forest canopy.

Furthermore, an unusually severe snow and rain storm in March, 2016, blew down numerous oyamel fir and pine trees. A week later, the Reserve's acting director authorized salvage logging; subsequent photographs have shown that salvage logging has seriously degraded the forest floor. In contrast, allowing protected areas to regenerate naturally is a preferable management option to salvage logging for this rich oyamel fir-pine ecosystem. Continuing logging activities underscore the need for enforcing year-round protection of the forest throughout the Reserve. 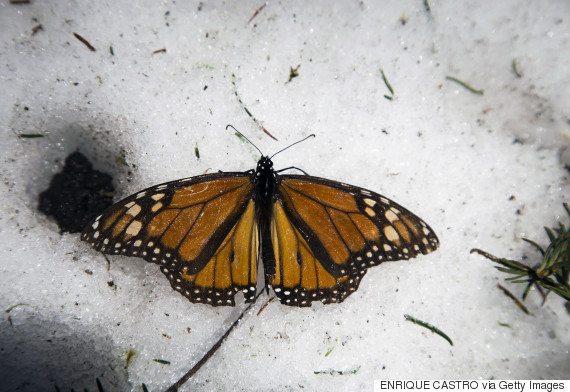 A monarch butterfly in the snow in Michoacan state, Mexico, on March 11, after a strong winter storm. (ENRIQUE CASTRO/AFP/Getty Images)

Monarchs are facing a new potentially lethal threat to their overwintering habitat. In 2007, the Secretariat of Environment and Natural Resources awarded Grupo Mexico, Mexico's largest mining corporation, a concession to reopen an old mine in Angangueo, to mine copper, zinc, lead, silver and gold beneath the core zone of the Reserve. The mining process will extract large volumes of water from the subsoil and expel it outside the area being worked, but water is vital for overwintering monarchs and for maintaining the surrounding forest ecosystem. There is no precedent for exposing overwintering monarch butterflies to a major mining operation, and the Environmental Impact Assessment does not address the inevitable harmful consequences to the butterflies, which are the reason for existence of the Monarch Butterfly Biosphere Reserve.

The three North American heads of state will meet on June 29, 2016, in Ottawa, their first joint meeting since 2014. We, the undersigned scientists, writers, artists and concerned citizens, call upon President Enrique Peña Nieto, President Barack Obama and Prime Minister Justin Trudeau to take swift and energetic actions to preserve the monarch's migratory phenomenon. Success will require activity within all three countries: mitigation of the loss of breeding habitat due to milkweed-killing herbicide usage by protecting parcels of land with milkweeds and native nectar sources; termination of all logging in the Monarch Butterfly Biosphere Reserve; and a prohibition of mining in the Reserve. Leadership responding to these challenges is crucial; monarch butterflies are among the most extraordinary and iconic creatures on the planet, beloved by many, and they represent a fundamental connection of our three countries.