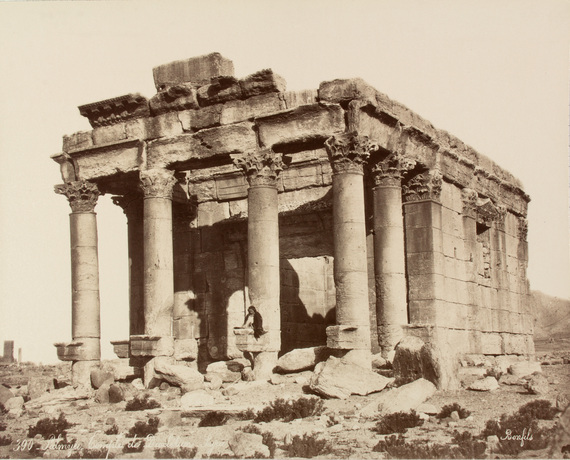 The Smithsonian's Freer Gallery of Art and Arthur M. Sackler Gallery have placed on view a relic from ancient Palmyra in Syria. In addition, the galleries are displaying images of 18th century engravings and 19th century photographs from its archives. In the wake of Daesh or the Islamic State's offensive in Syria, this exhibition has attained a symbolic significance. Being held in the capital of the world's only superpower with a questionable Syria policy, the display reminds us of what is at stake.

It was exhilarating to be connected with this rich past of humanity and at the same time extremely devastating to remember that we live in a world where our ancient treasures can be wiped out while we look on helplessly. 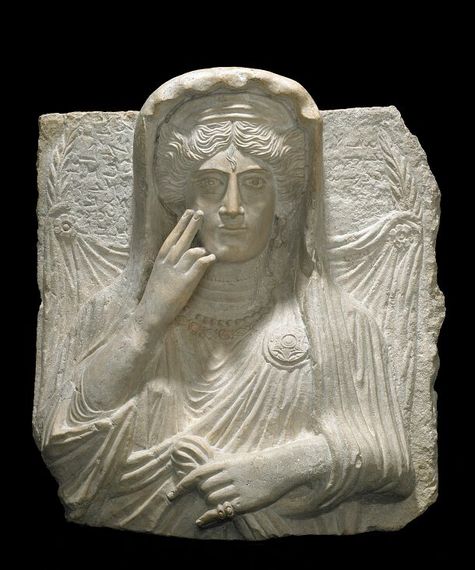 Haliphat - a limestone funerary relief bust on display at Sackler- stares at you with an intense expression. Her two fingers on the chin represent modesty and virtue. For a moment it seems like a reflection on what is happening in Palmyra today. Halpihat has been dated back to 231 C.E. The almost-alive figure displays Roman and Aramaic artistic styles, reminding us of how Palmyra was the bridge between the East and West.

The Islamic State reportedly has planted mines and bombs in Palmyra. It is unclear if ISIS intends to destroy Palmyra or is using the threat as a strategy to deter attacks by Iraqi forces. Nevertheless, our collective heritage under grave threat. 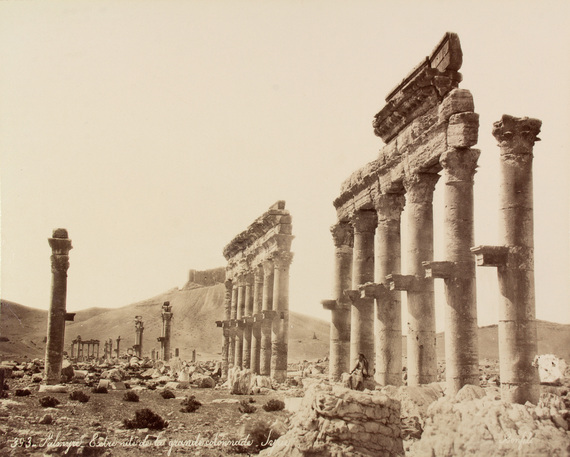 Palmyra, the ancient cultural fulcrum of the world, was a caravan route in the earlier years of Greek, Roman and Persian civilisations. Its ruins show the unique fusion of myriad cultural influences, including the Roman style it acquired around the first century. Even if ISIS spares Palmyra, the prospect of the site being used as a looting arena haunts one, given the high prices that the international antiquities' black market offers. Palmyra, the breathtaking gateway to humanity's ancient past includes the famed Temple of Ba'al - a theatre and a two-millennia-old colonnade - which is already showing signs of attack. 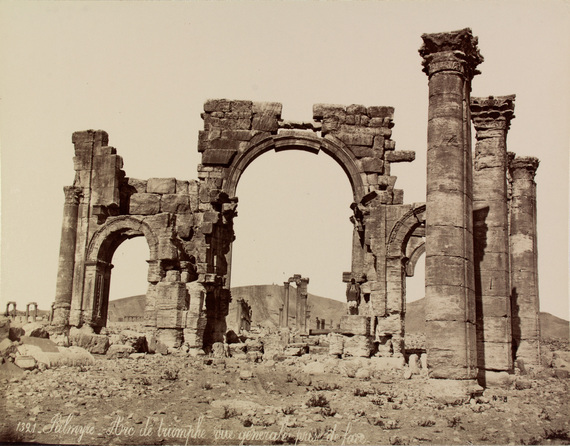 The "engraving images" at Sackler are from Robert Woods' 1753 The Ruins of Palmyra, which, according the museum website, are"a publication that inspired the popular neoclassical architectural style in Britain and North America". Apparently, the image, entitled "Eagle Decorating an Ancient Roman Temple" inspired the seal of the United States while the design on Palmyra's coffered ceilings influenced the ceiling of the Freer Gallery's northern entrance. Fèlix Bonfils, a 19th-century photographer captured the photographs on display. 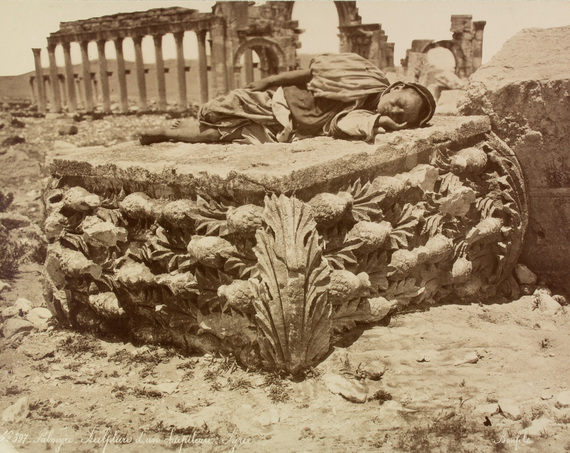 Palmyra prospered in the 2nd and 3rd centuries CE. When the Sāsānians replaced the Parthians in Persia and southern Mesopotamia (226 CE), Palmyrene trade suffered. There were rebellions and tumults in the ancient times as well. Especially when the rebels declared the city independent of Roman control. However, the Roman emperor, Aurelian, regained the territories in 272 CE and Palmyra came under a major assault. It was rebuilt and remained an important connection from Damascus to the Euphrates. In the 7th century, it was captured by the Muslims under the first Caliph, Abu Bakr.

Palmyra remained a link between the East and the West. Its language, according to Encylopedia Britannica, was Aramaic and "Palmyrenes exchanged goods with India via the Persian Gulf and also with such cities as Coptos on the Nile River, Rome, and Doura-Europus in Syria". 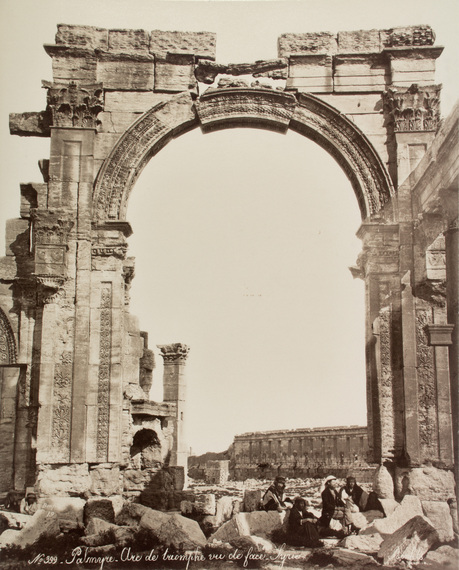 The breathtaking photographs on digital display at the Sackler speak of Palmyra's complex architectural and spiritual influences like Mesopotamia and Iran. The artworks are a testament to the way the Roman and Persian empires mingled and how the present emanates from the ancient. This thread runs the risk of being broken.

ISIS has been targeting heritage sites in Syria and Iraq with abandon. It had earlier assured that the ancient ruins of Palmyra would not be vandalised as they were not similar to the polytheism depicted at Mosul in Iraq. But disturbing reports from the Middle East suggest otherwise. 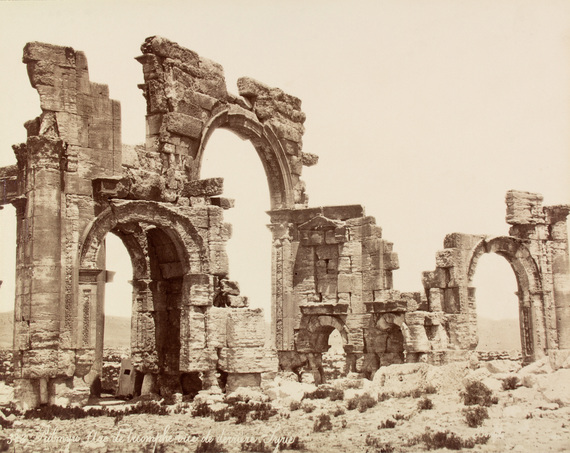 A video released a few months ago showed ISIS extremists annihilating the historical antiquities in Mosul with sledgehammers, justifying their vandalism with a Quranic reference that forbids idol worship. For ISIS, the act of attacking cultural heritage is akin to what Prophet Muhammad (pbuh), according to traditions, did in Mecca in the 7th century. The comparisons are invalid as the acts carried out by Muhammad (pbuh) were time-specific and responded to the context in which he had to preach monotheism. ISIS has a bogus theology as Muhammad (pbuh) never ordered his followers to continue with such practices.

The destruction of Mosul museum represented the worst facet of ISIS' cultural cleansing agenda in the Middle East. The ruins of the ancient city of Palmyra were designated a UNESCO World Heritage site in 1980. Other than the Mosul museum and library, ISIS has blown up churches, Shia and Sufi mosques, ancient manuscripts,Nergalentryway gate to Nineveh province (ancient capital of the Assyrian Empire),Khorasabad, the archaeological site of Nimrud, statues and many other artifacts that date back to the Assyrian and Akkadian empires. The latter represent deities and historical leaders in northern Iraq. 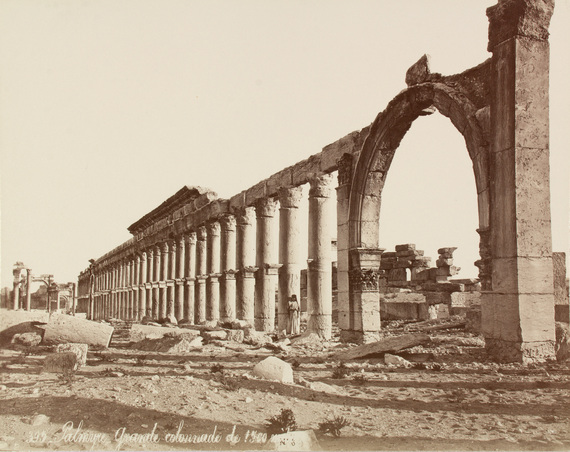 Now the ancient Roman-era ruins in the Syrian city of Palmyra are also endangered. ISIS'earlierstance of sparing Palmyra could be just another ruse. In recent days, it has also witnessed scores of indiscriminate and blatant killings by ISIS who killed at least 400 government loyalists after gaining control of the area.

Experts have indicated that high prices of antiquities may be one of the major reasons for the looting of heritage. The United Nations has resolved to combat the trafficking of artifacts by the Islamic State and prosecute smugglers of antiquities.. Britain announced that it would pass legislation to ratify the 1954 Hague Convention that vows to protect world heritage. It remains to be seen what a law can do when the real issue in Iraq is a crumbled state and a void that has been filled by this group which both invokes the memory of Islam and plays with Sunni passions against the Shiite Iraqi administration. 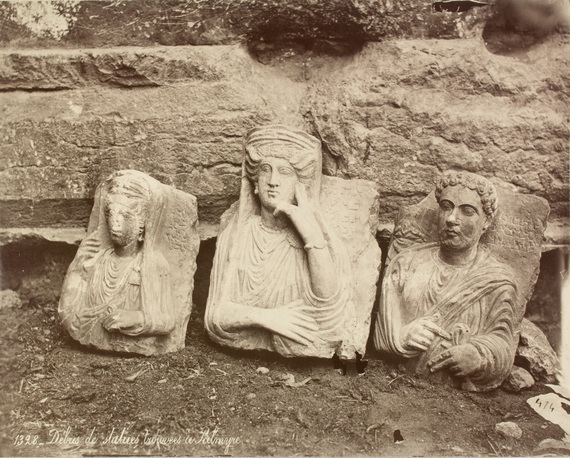 At the Freer and Sackler galleries, I could not help remember the fate of the Baghdad Museum when the ostensibly free world had liberated the Iraqis. There is a shared failure. Palmyra's current fragility is also a result of flawed policies of the West and the Arab world that armed extremist goons in the first place. 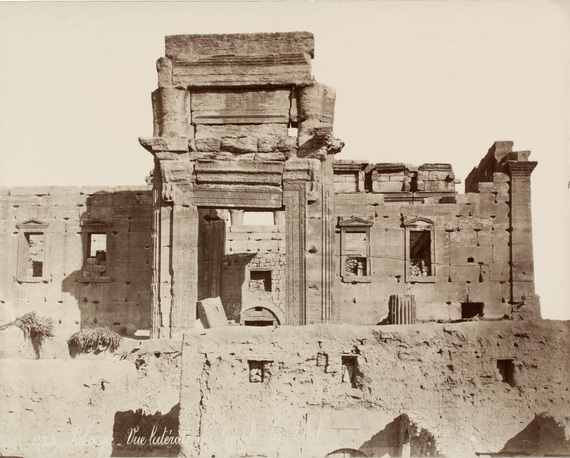 The images at Freer and Sackler gave a temporary respite before the crude reality resurfaced: Over 200,000 Syrians have died since the war commenced and millions may have been displaced or seriously affected. It's time to end this madness. The Syrian state should not be allowed to collapse, for violent extremists will fill in the vacuum. The West needs to reconfigure its ill-advised, half-hearted intervention there. At stake are not just ancient ruins but the future of the region and by extension the world.

*(pbuh) serves as an abbreviation for "peace be upon him."