For Patricia Stumpff, planning Thanksgiving dinner has been a nightmare in recent years. Last year, she had her family meal the Sunday before the holiday. The year before, they ate at 10 p.m. on Thanksgiving Day. Stumpff, who works at Target, has had a hard time squeezing in a few hours for family when her daughter, who also has a job in retail, has to show up for work on Thanksgiving.

“I have been angry about the whole creep of Black Friday into Thursday for a number of years,” Stumpff, 61, said. “I decided that if I was having that many problems with getting the family together for Thanksgiving dinner, that other people were, too, and we needed to try to stop this.”

Stumpff launched a petition asking Target to reconsider its policy of opening on Thanksgiving Day. So far, her petition has garnered more than 95,000 signatures on Change.org. It's one of nearly 60 such petitions on the site, and together they've drawn more than 188,000 signatures asking retailers to stay closed on Nov. 28.

Like others who have expressed outrage over stores’ Black Friday (or Thursday) plans, Stumpff said she’s concerned about what the retail creep is doing to both workers and shoppers. 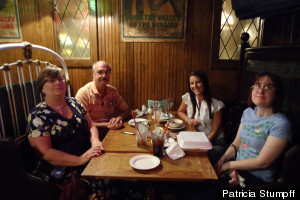 Patricia Stumpff and her family.

“All my life I felt like I needed a balance between work and family time and work would win out a lot,” Stumpff said. “These are holidays that we should stay home with family, and the rest of the year the companies can win out.”

For its part, Target says stores are opening at 8 p.m. next Thursday, an hour earlier than they opened on Thanksgiving last year, in response to customer demand. Target spokeswoman Molly Snyder said the company considers workers’ preferences when making Thanksgiving schedules. Stumpff, who is a six-year veteran of Target, got the holiday off this year, but she sympathizes with her colleagues who weren’t so lucky.

“Last year we saw the benefit of opening earlier with many families coming out to shop and record crowds across the country,” Snyder wrote in an email. “We respect the right of all of our team members and guests to express their opinions.”

Target isn’t alone in pushing its Black Friday deals earlier and earlier. Walmart, Kmart, Best Buy and others are also holding their Black Friday sales on Thursday this year as they aim to get customers in the door.

Though many retailers have been opening on Thanksgiving for the past few years, the stakes are higher than ever this time around. Stores are looking to squeeze as much profit as possible out of a holiday shopping season that’s six days shorter than usual. Stores make 20 to 40 percent of their annual sales between Black Friday and Christmas.

Still, some retailers, such as Costco, RadioShack and Nordstrom, are bucking the trend and staying closed on Thanksgiving. While they may miss out on a few money-making hours, they likely won’t be subject to customer backlash. Shortly after Kmart, Walmart and others announced their Black Friday plans, shoppers blasted the companies' Facebook pages, angry that workers would be forced to show up on Thanksgiving and that the stores were inserting consumerism into a holiday meant for family.

Despite all the outrage, retailers are unlikely to change their minds -- especially since plenty of shoppers have shown up to stores on Thanksgiving in the past.

Clarification: An earlier version of this story described Change.org as a left-leaning website. While the site has a history of providing space for progressive causes, it maintains an open platform for users.