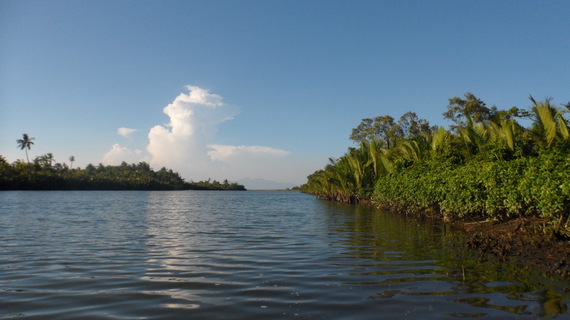 On Dec. 9, 2014, the Sundarbans, the largest mangrove forest in the world faced one of the deadliest environmental disasters in the history of Bangladesh when a vessel, carrying over 350,000 liters of furnace oil, after being hit, capsized in the Shela river, posing threats to the rare dolphins, the local food chain and the entire local ecology.

Unfortunately, environmental disaster is only one of the major threats to the Sundarbans, a UNESCO heritage site. What I am referring to is a man-made problem that is easily avoidable- the Rampal Power Plant Project.

The 1320-MW coal based power plant has been planned within 14 kilometers of the Bangladesh portion of the Sundarbans. The Department of Environment approved the project's Environmental Impact Assessment (EIA) Report in August 2013 and the work of the plant was inaugurated on October 5, 2013. Prior to that, an Initial Environmental Examination (IEE) was carried out in September 2010.

Both the IEE and the IEA studies conducted by the Centre for Environmental & Geographical Information Services (CEGIS) have been controversial given that these reports do not present an accurate and in-depth picture of the costs and benefits, but solely highlight the mitigation measures of possible damages to nature and the citizens.

The decision to build the Rampal Power Plant must be made through prioritizing the environment. As the world is about to enter into a new global framework for the next fifteen years, sustainable development has been identified as the primary goal.

The Sundarbans is internationally recognized for its rich biodiversity of mangrove flora and fauna both on land and water. Additionally, the Sundarbans provides sustainable livelihoods for millions of people in the locality for various professions such as fishermen, woodcutters, honey gatherers, leaves and grass gatherers. Additionally, the Sundarbans also present an opportunity to earn revenue from both national and international tourism although this is still a challenge due to poor access, lack of transport and accommodation facilities.

Last but not least, mangroves are one of the most vital solutions in the area of climate change adaptation since it acts as a shelterbelt to protect the people from storms, cyclones, tidal surges, seawater seepage and intrusion. Given that Bangladesh is one of the countries most vulnerable to climate change, it is more logical for us to protect this national sanctuary.

With regards to conservation of the mangroves, we do not need to look far. Our Asian neighbors can act as our role models in heralding bold moves for the protection of the mangroves. More than half of the world's mangroves have been lost over the last century, but all of those surviving in Sri Lanka are now to be protected in a landmark project initiated in May 2015.

The project targets 15,000 women; they will be offered microloans and training to start businesses in an effort to stop women from using the tress for firewood and to guard the forests near their homes. Placing women at the heart of climate change adaptation measures is also strategic as it leads to the political, social and economic empowerment of women.

In the Philippines also, to combat the threat of storm surges in Oriental Mindoro, a number of initiatives have been taken by the local governments of Calapan City and the Province of Oriental Mindoro which involve reforestation to protect village dwellers from storm surges, rise in sea level and coastal erosion among others.

The Oriental Mindoro Mangrove Rehabilitation Program around May 2012 planted a total of 30,000 mangrove propagules, or seedlings in one of the most depressed barangays in Baco, Oriental Mindoro in accordance with the national government's pledge to combat climate change. I had the opportunity to visit the marine-rich biodiversity area of Oriental Mindoro and get a firsthand account of the challenges and adaptation efforts of the fisher folk community who are reliant on the sea for their livelihoods.

Both these positive and innovative responses in Sri Lanka and the Philippines were undertaken by their respective governments in an effort to protect the mangroves. Conversely, in Bangladesh, we are heading towards major environmental destruction. The building of the Rampal Power Plant would not only negatively impact the Sundarbans but also the entire ecosystem of the country. It would also pose a threat to livelihoods on those dependent on this national reserve.

Two other concerns also need to be highlighted. Firstly, the coal from India that will be imported for the power plant is so toxic that it cannot be burned in its own country. The ships that carry the coal create risk of pollution that will endanger the Pashur River and wetlands. Secondly, the plant has been planned within 14 kilometers of the Sundarbans whereas the same project could not be implemented in India since its law prohibits raising power plants within 25 kilometers of any forest. Both issues represent the hypocrisy of the project, which is meant to be a partnership between India and Bangladesh.

In this respect, an urgent policy response is required from the Bangladesh government that would entail the immediate cancellation of the Rampal Power Plant project. This may draw criticism from a number of strategic partners however; the government has to step in to ensure that they uphold the mandate of protecting nature, on which humans rely upon.

I am the Coordinator for a regional project titled, "Building New Constituencies for Women's Sexual and Reproductive and Rights (SRHR): Climate Change & SRHR" in partnership with Asian-Pacific Resource and Research Centre for Women (ARROW). As part of the regional partners meeting, I visited the Philippines and had a study tour of Oriental Mindoro.

I am the photographer of this photo.

Candidate for Master of International Development Policy at Georgetown University