Never again. We hear those words in reaction to atrocities committed against mankind. But we have to put actions behind those words.

Syrian civilians under siege from a civil war are trying to survive eating leaves and grass. They are pleading for the international community for help. But the war and hunger goes on.

Hundreds of thousands of Syrians have died. Over 13 million Syrians need humanitarian aid. The five-year conflict is considered the worst humanitarian disaster since World War II. 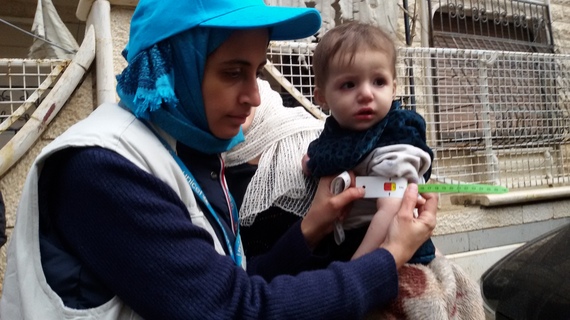 On 14 January 2016, a child is screened for malnutrition at a make-shift hospital in Madaya, Syria. The UNICEF team and staff of the World Health Organisation were able to screen 25 children under five for malnutrition using the Mid-Upper Arm Circumference measurement. Twenty-two (22) of the children showed signs of moderate to severe malnutrition. (UNICEF/UN07564/Singer)

Peace talks in Geneva between the Syrian government and the opposition have stalled, while military offensives and starvation have escalated. Russian airstrikes are supporting the Syrian regime and its offensives. The Russian bombings are devastating opposition held areas, including Aleppo.

The fighting is displacing more civilians and preventing others from receiving humanitarian aid. David Evans of Mercy Corps pleads, "We are cut off from Aleppo City...Innocent civilians are running for their lives. Right now, we are seeing tens of thousands of people make their way to the border with Turkey."

Over four million Syrians have fled throughout the Middle East and some onto Europe. The refugee outflow is a crisis within a crisis. The refugees are suffering and the host nations are overburdened.

Humanitarian organizations do not have enough funding to help the war victims. Syrian refugees, because of reduced food aid, have been forced to withdraw children from school and send them to work or to beg. Only ending the civil war can ultimately stop the refugee emergency.

Every bomb dropped or gun fired in Syria's war is simply going to plant the seeds for more war and chaos. Eventually there will be nothing left of the country. 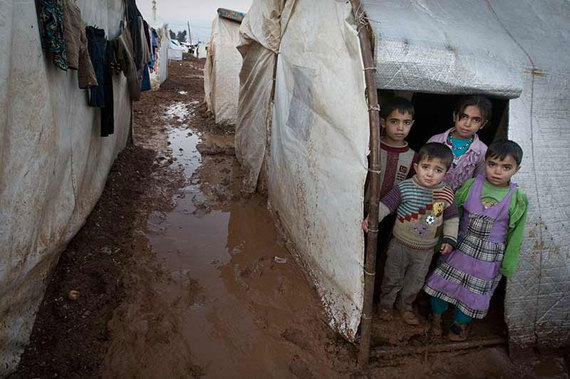 Syrian children stand in the entryway of their tent shelter in the Bab Al Salame camp for internally displaced persons in Aleppo Governate. (Photo: UNICEF/Giovanni Diffidenti)

More war and chaos also strengthens ISIS (Daesh) in Syria, and that threatens every nation. A peace settlement to Syria's civil war would devastate this terrorist group.

U.S. Secretary of State John Kerry explains, "Nothing would do more to cut the legs out from under Daesh than a negotiated political solution in Syria that would allow all sides, all parties, all countries, to focus on defeating the terrorist group Daesh once and for all."

But there is also another powerful enemy facing the Syrian people. It is hunger. Since the start of the civil war farming, food production and distribution have been destroyed in Syria. So civilians rely entirely on humanitarian agencies like the UN World Food Programme, Syrian Red Crescent, UNICEF, Save the Children, and Catholic Relief Services.

But people are starving to death every day in Syria because the warring sides routinely block humanitarian aid from getting through. There are at least 500,000 Syrians living in besieged areas with little or no food. And likely much more. Ertharin Cousin, the director of the World Food Programme (WFP) says "Every day, we receive alarming reports of lack of food, of lack of water, of acute malnutrition, and of death."

The sieges of civilians has to end. The Syrian government and opposition have to get to the peace table. The United States, Russia and other nations have to encourage this in words and actions. As Secretary Kerry states, "the world needs to push in one direction -- toward stopping the oppression and suffering of the Syrian people and ending, not prolonging, this conflict."

A nationwide ceasefire between the government and the opposition must be put in place right away. This will allow humanitarian aid to get through. It would end the starvation of civilians by granting regular access to humanitarian agencies. It would create the conditions where a lasting peace settlement could occur. 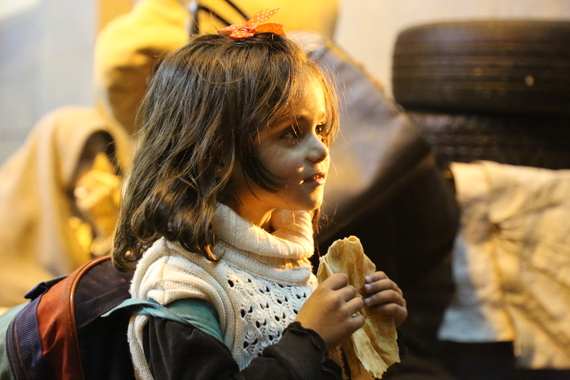 On 11 January 2016 in Madaya, Rural Damascus, a girl eats bread delivered by relief agencies including UNICEF and the World Food Programme (WFP). "Children were waiting for us for a long time but few remained on the streets when the convoy made it inside Madaya after dark," says Isam Ismail of WFP. "The few children who did stay out to receive the convoys were cold and stormed to the team to ask for biscuits or bread or anything that they could eat immediately." Now Madaya is again blocked by the Syrian government from receiving aid. (UNICEF/UN07224/Al Saleh, WFP)

But relief agencies have to be allowed to move freely with consistent access. In the town of Madaya relief agencies were allowed into the town during October, but then were blocked for several months until regaining entry in January. Now the government is preventing aid from reaching Madaya again, while people starve.

Dr. Rajia Sharhan of UNICEF, who treats severely malnourished children in Syria, says "war has no mercy." She and other humanitarians can only stand by and wait for the Syrian government to approve their passage, knowing that every minute someone's life rests in the balance.

The starving Syrians need action now. As UN Syria Envoy Staffan De Mistura says "every day lost is a day lost for a ceasefire and for humanitarian aid."

Every day a child in Syria lies near death because the world cannot put a stop to a senseless war. But millions can still be saved if the guns are put down, food convoys start moving into besieged areas, and the peace process begins.