In this series, Ilana C. Myer is revisiting the fantasy classics that first shaped her love of the genre, and evaluating them with new eyes. Sometimes the best way to comprehend the nature of a journey, when you're in the middle, is to look back to its beginning... 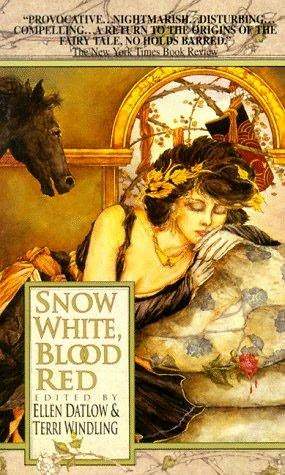 Once upon a time, in a metropolis in deep winter, a girl had her heart broken. She gathered her things from a high-end rental overlooking Times Square into a wheelie suitcase. She took the subway back to the basement apartment she shared with two other women, looked ahead to a plethora of winter days, and wondered how to go on. That was when she discovered a short story, "The Snow Queen" by Patricia McKillip. The girl was saved for another day. One day followed the next. And the winter did pass--eventually.

So I admit that when I first discovered this short story about heartbreak, self-reliance, and healing, I was probably its ideal audience. I came across it in Snow White, Blood Red, an anthology of fairy tale retellings edited by Terri Windling and Ellen Datlow. Returning again more than a decade later and in quite a different frame of mind, I was wondering how it would hold up to scrutiny. It turns out, so many lines and phrases stuck in my head down the years, not only due to emotional resonance but because the story is exquisite, delicate as the tracery of ice filaments on a windowpane. Masterful rhythms make it into a prose poem, laced with knife-edge wit and insight. Take for example the Snow Queen's assessment of a girl's face: "How sweet, Neva thought, to have kept that expression, like one's first kiss treasured in tissue paper."

In a nameless city trapped in what seems eternal winter, a beautiful couple watches the snow fall. They are Gerda and Kay, the protagonists from Hans Christian Andersen's fairy tale, here presented as husband and wife instead of children. Like siblings, they have known each other all their lives--and for Kay, this familiarity has begun to pall. City life and wealth have made him complex and given him inchoate yearnings. Meanwhile Gerda, childlike, has relied on Kay for all her needs. They are rich, and the party they attend that night has the grandeur of a ball, complete with champagne fountains and crystal chandeliers. (The descriptions of the city and ballroom are fantastical, otherworldly, even as the sensibility of the characters is contemporary. It's an enchanting combination, ideally suited to a fairy tale.)

Wit is a force of power in "The Snow Queen"--a weapon, a sign of maturity, but also of decadence. When Neva, the Snow Queen herself, entrances Kay, it is with the glamour of her wit. Conversely, Gerda has only blunt honesty to offer. Her love for Kay is extravagant and limitless and so renders her vulnerable in a way that the socialites find a bit gauche. It is no surprise that Kay is swiftly spirited away by Neva and the promise of erotic fulfillment that her wit seems to offer. There are also her eyes, "black as the night sky between the winter constellations."

But this is Gerda's story, one which McKillip handles with humor and compassion. A thief who spots Gerda staggering out of the party dripping jewels sees an opportunity, only to end up in a diner buying her hot chocolate and attempting to coax her to life. This thief is a fabulous woman named Briony, whose description begs for a Kinuko Craft painting: "She wore lace stockings under several skirts, an antique vest of peacock feathers over a shirt of simulated snakeskin, thigh-high boots, and a dark, hooded cape with many hidden pockets." Gerda's helplessness in the face of heartbreak arouses Briony's protective instincts, and she and a waitress end up discussing the tawdry and cliché nature of such a predicament. It's a scene that's wonderfully warm, wise, and funny. After Briony invents a story of fictitious heartbreak to cheer Gerda up, the waitress says, "I knew a guy like that. I danced on his car in spiked heels. Then I slashed his tires. Then I found out it wasn't his car."

Humor moves to wisdom as Briony muses--and it's tempting to quote the entire conversation but since that's impossible, here's a piece. "What you have to do," Briony tells Gerda, "is start pretending you have something to live for." And then: "...If you keep pretending and pretending, one day you'll stumble onto something you care enough to live for...The only thing you're seeing in the entire world is Kay. Kay is in both your eyes, Kay is your mind...You have to learn to see around Kay. It's like staring at one star all the time and never seeing the moon or planets or constellations--"

A decade ago I saw a wisdom in this that took my breath away. Probably to someone who has never loved with the defenseless abandon of Gerda, it would not resonate in the same way. Still I think it's notable that this is a story in which the sparkle of wit is contrasted with raw, uncompromising wisdom and ultimately found wanting. When next we see Gerda, she is shouldering a sack of potting soil in the flower business she has sold her jewels to create. She is alone and supporting herself. While Kay finds himself caught in a web of icy brilliance that is the Snow Queen's abode (we see very little of this--it's unclear if they even end up having sex, as Neva takes great pleasure in withholding pleasure), Gerda's life becomes unglamorous. Gerda, who has always loved flowers, gives life to what she touches; the contrast with the Snow Queen and the eternal winter she embodies is clear.

By the end of the story, both Kay and Gerda have come by their own hard-won wisdom. It is unclear whether their separate paths--hers through light, his through darkness--will end in a happily ever after. But despite the false glamour that "The Snow Queen" works to dispel, the piece glitters with enchantment, bewitching. All these years later, the imagery and musical dialogue resound with the unerring skill of a master. Short as it is, this is a tale worth revisiting again and again.

This essay was reprinted with permission from Tor.com