Local conservation efforts are important to restoring and protecting coral reefs. However, if we don't halt climate change those efforts will not be enough to save them. That's why marine biologists and ocean lovers have their eyes on the COP 21 climate negotiations in Paris this week.

Last year, I co-authored a New York Times op-ed entitled "We Can Save the Caribbean's Coral Reefs." The premise was that we must not use inaction on global emissions reductions as an excuse to postpone local conservation actions. Dr. Jeremy Jackson and I wrote, "We need to stop all forms of overfishing, establish large and effectively enforced marine protected areas, and impose strict regulations on coastal development and pollution, while at the same time working to reduce fossil fuel emissions driving climate change."

Over the last year, dire scientific results have continued to roll in. Sea level is steadily rising with no end in sight. Ocean water continues to warm. Coral reefs have bleached worldwide. Intense storms fueled by warmer seas bash coasts and corals. The fate of coral reefs is one reason it's critical that world leaders take collective, meaningful action.

Meanwhile, coastal communities are increasingly engaged in ocean conservation. There are some truly notable efforts, and those are buffering the impacts of climate change. Yet we urgently need strong climate policy grounded in science: a limit on total carbon emissions and a carbon tax, huge investments in clean energy research and development, and adequate support for developing countries to cope with climate change. 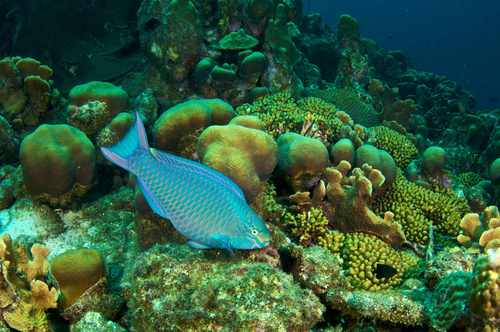 Due to nature's impressive resilience, coral reefs probably won't cease to exist regardless, but without bold policy changes they won't be anything like the iconic seascapes we envision. They will be softer -- more acidic waters melt organisms' skeletons. They will be less diverse -- some species simply won't be able to thrive. They will be fuzzier -- algae can overgrow corals in polluted conditions. They will not feed us -- hundreds of millions of people will lose the nutritious seafood on which they depend. They will not put money in our pockets -- tourism and coastal livelihoods will be devastated. They will not protect us -- as they crumble they can no longer provide a barrier to storms. They will give us less joy -- much of the splendor and vibrance of these ecosystems will be lost.

Given how high the stakes are for ecosystems and those who depend on them (aka everyone!), the bar has been set too low for these negotiations. The goal of limiting change to two degrees Celsius will not avoid some terrible impacts -- small island states are arguing for a 1.5 degree Celsius increase, and countries' current pledges could still result in a six degree increase. A cap on total carbon emissions is not even on the table. The fund being raised to support developing countries is likely not big enough.

Nevertheless, we have to start somewhere, and it's past time to start seriously tackling climate change at a global scale. Whatever the policy outcomes of these negotiations, they must be just the beginning if we are to continue to reap all the benefits of food security, storm protection, livelihoods, and sheer beauty that coral reefs and other ecosystems provide.