Academy Award-winning best documentary short Saving Face is, on its surface, a hero's journey involving a successful native son who returns to his homeland to tackle a seemingly insurmountable social ill.

The affable Pakistani-born, London-based plastic surgeon Mohammad Jawad has traveled to Pakistan 10 times since 2009, volunteering his time to treat over 50 courageous women. These women -- the film's real stars -- have been horribly disfigured in acid attacks at the hands of abusive husbands, in-laws, and rejected suitors.

But Saving Face, which premieres on March 8, International Women's Day, raises larger issues about this global human rights atrocity -- and how simple endings are seldom that easy.

Acid violence is common not only in Pakistan but also in Uganda, Bangladesh, Nepal, Cambodia and 15 other countries worldwide.

It is symptomatic of a widespread societal problem -- the pervasive subjugation of women in economic, social, cultural and political spheres of life.

At least 1,500 attacks are reported globally each year, though experts warn the real number is far higher. Eighty percent of acid attacks are aimed at women -- 40% of whom are under the age of 18. According to Acid Survivors Trust International (ASTI), the world's leading organization addressing the issue, attacks happen in Muslim, Christian, Hindu and Buddhist countries.

The main reasons for attacks are rejection of love, marriage or sex proposals. In other cases, perpetrators motivated by land or business disputes may attack their opponents' wives or daughters because disfiguring these women will irreparably harm the entire family.

Film co-director Sharmeen Obaid-Chinoy has described Saving Face as "demonstrating the bravery of Pakistanis confronting this problem, including the survivors themselves, with surprisingly hopeful results." Indeed, true impact in any country rarely happens when foreign aid workers merely helicopter in and out.

ASTI works in partnership with local organizations in 5 countries where acid attacks are common by maintaining an international network of volunteer plastic surgeons, burn specialists, physical therapists, nurses and counselors.

Mohammad Jawad, the film's charismatic doctor, acknowledges the need for strong on-the-ground capacity. "There's only so much I can do," he says in the film, inviting others to join him. However, he is adamant that medical care is a superficial solution.

Justice without enforcement is hollow

At a gathering at the Pakistani consulate in Beverly Hills, Dr. Jawad told the assembled crowd that the perpetrators "need an ass-kicking." Real progress, he insists, depends on the law -- and the enforcement of the law.

Saving Face follows the legal case of Zakia, a woman whose husband disfigured her with battery acid when she sought a divorce following years of abuse. The husband is convicted and sentenced to two consecutive 14-year sentences. Zakia's case helped promote a recent criminal law amendment, under which those found guilty of deliberate acid violence can receive stricter sentences. Acid attacks are now considered crimes against the state, and bail and out-of-court settlements are not permitted.

Even so, the revised amendment is only a first step towards justice. Activists are supporting the Acid and Burn Crime Bill 2012. Groups like Acid Survivors Foundation (ASF) along with Sharmeen Obaid-Chinoy and the Working Group on Acid and Burn Violence call for the need to address the challenges of investigation, fair trial, and free medical and rehabilitation services. Police, who can sometimes be bribed, must also be held to the highest standards of law enforcement.

A global movement is needed

Ultimately, a global movement is required to end acid violence. This movement must insist that whatever injustice happens to one woman happens to us all. There's a role for everyone from artists to doctors, journalists to judiciary, business giants to everyday citizens - and survivors themselves. Individually and collectively, the movement must address fundamental inequality and discrimination against women and support women's empowerment through every channel proven to work. This might look like enhanced education for girls, support for micro-finance programs, access to reproductive health care and leadership development, to name just a few.

A tall order not only for this International Women's Day, but every day. 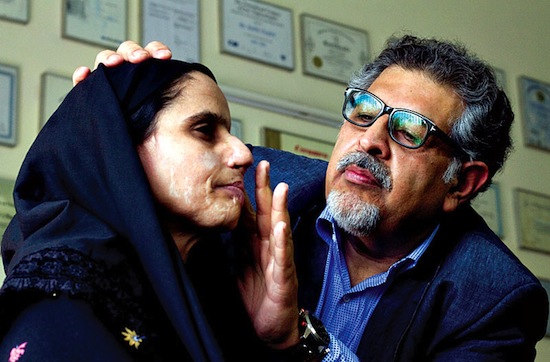