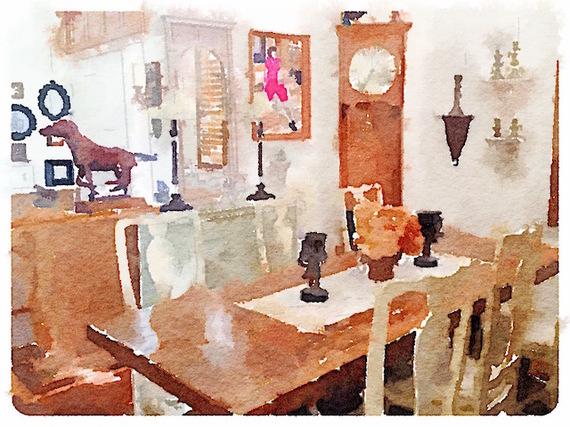 "Of course you'll keep the house." It was my parents' refrain in the final years of their lives. They proudly told their shepherds -- friends, doctors and caregivers -- how their son and daughter would share the place they called their dream home.

We listened silently. You don't argue with your parents as they make their final wishes known, but any sane person knew this could never work for a million reasons. Who would maintain the property? Manage the finances? Clean up? Would we occupy the space at separate times, or did my parents expect us, with our spouses and collective brood, to vacation at once in the home they'd retired in?

Never mind that none of us liked being in Florida. If anything, I'd re-create their home in Maine. The antiques my mother spent her life collecting would be perfect for a country cabin.

What was an uncomfortable conversation became a painful reality when my parents died within seven months of each other. Thus began the process of trashing their 15-year installation.

My parents were artists -- my mother a painter, who'd worked in fashion and interior design, and my father a woodworker and sculptor who could finally hone his visions after a New York Telephone career.

Unlike the minimalist designer Zoran, my mother believed more is more. A sofa isn't a sofa unless it is covered with patterned pillows, trimmed with tassels and fringe. More tassels dangled from the armoire she hand-painted with a crackle finish, then stenciled with a border of delicate roses.

Lifelong New Yorkers, my parents ogled Victorian mansions with detailed wood paneling in the Prospect Park South section of Brooklyn where we lived. My father loved the architecture of his boyhood, from the Loewe's King Movie Theater to Luna Park, and my mother took inspiration from House and Garden, English Country Houses and Cottage Style. The house in Palm Beach County, where they spent the last 15 years of their lives, was their canvas.

My mother redid the floors in a high luster oak. My father created pediments and pilasters, plinths and porticos, dressing up the plain and simple lines left by the developer. Every doorway was enshrined with a unique sculptural molding, often in the shape of a lunette. He would scour second-hand stores for cabriole table legs and gargoyles and incorporate these, employing a jigsaw to carve Victorian scrolls.

He and my mother worked together. She would design something - a buffet, a sideboard - and he would build it, after which she would hand finish the surface. They gave house tours to all who visited. It could have -- it should have -- been a magazine spread.

"All this molding has to be removed," said the woman in white linen to whom we were offering the listing. "No one wants it."

Even the fireplace mantel my father carved by hand, with its stained glass screen?

"It has to go. No one wants a fireplace in a tropical climate."

At the front door, on the sculpted knee wall my father built, was a wooden horse he carved. "No one wants your parents' folk art," she said, making notes on her clipboard.

I had looked at comparable homes for sale before we agreed to put my parents' on the market. They were all furnished in drab old people's furnishings. Our place was different. My mother collected owls, and although the collection had got out of hand, she kept a curated selection in a cabinet in her bedroom. The owls were all there when she died. I wanted to keep the owl collection. I overheard the white linen suit tell my husband, "The daughters are too emotionally involved to see it."

"Our bags are packed," my mother had told me, years before she died. Packing their belongings after they were gone was another story. They were not hoarders, they were collectors. OK, there were a few things they hoarded. In her 70s and 80s, my mother started taking paper towels, napkins and wipes from restaurants and hospitals. Even as she lay dying, she made sure I took home the packages of wipes and tissues they gave her each day in the hospital. She died with closets full of this stuff.

Barry was the man we hired to help liquidate their possessions. After the handyman carefully removed the moldings, Barry would try to sell them. He would help us ship some things up north, to be distributed among my parents' five grandchildren, and then sell everything else.

Before he died, my father slept with the lights on. "I want to see my work," he said. But in the end, Barry couldn't sell it. The real estate agent texted a photo of all the things with my parents' patina Barry had piled outside for the trash collectors. "Good job!" she wrote.

I have become one of the millions paying rent on a storage locker. It is filled with an edited selection of my parents' oeuvre. I'm holding on until we can find a place to re-create their world.