If you injure or kill a police officer, the penalties are tougher, and they should be.

We elect our leaders, they create the laws, and society is supposed to be structured to ensure that they apply to all equally.

It is why we empower law enforcement officials to have the maximum ability to interfere with our lives allowable under the Constitution. Police are permitted to hold you prisoner, to search and seize your property, to use physical violence, even deadly force based on their judgment. It is a staggering amount of power and with it comes awesome responsibility.

So when a police officer is gunned down, it is not only a tragedy for family and friends, it is an attack on the heart of us, the social contract, the rule of law.

By the same token that we provide enhanced penalties for harming police, so too must we inflict harsher penalties for those within law enforcement who violate that sacred trust and desecrate the rule of law. Abuse your incredible authority and the punishment must be harsh. No slap on the wrist. No excuse that the job is tough. We know. That is why you have been granted such latitude.

You do not get to say "All professions have a few bad apples." All professions don't have the authority to kill with a presupposition that the killing was justified unless proven otherwise. 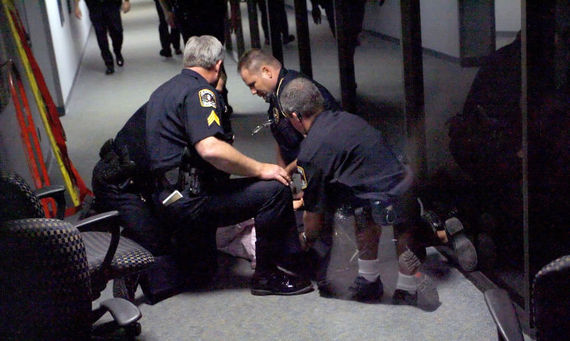 If you've played sports, you know how the team feels about the person not giving their all. A starter who lacks the needed skill. The shirker not helping the team prevail. Law enforcement has to have the same unwillingness to abide bad cops, the ones they know are incompetent, criminal, racist, abusive, unnecessarily violent, etc...

You are only as strong as your weakest link so it is not sufficient to say the overwhelming majority of cops are motivated to do good, protect and serve and make the world safe for their kids and ours. That's the standard, that is the expectation. And that argument suggests that too many "good cops" have decided that there is an acceptable level of bad apples even though their presence makes the population and their colleagues less safe.

The "no snitch" street policy that police often decry, is weak sauce compared to the police "no snitch" rule that compromises even officers drawn to the work for the right reasons.

And let's be clear, the very authority provided to officers to enforce the law appeals to some of the worst impulses in people. Some become police for a macho thrill, a tough guy rush. They happily escalate situations so that they can put someone in their place. Power corrupts and absolute power corrupts absolutely. Standards and professionalism in law enforcement have to be exemplary. The social contract requires it. The delicate balance between awesome power and clear accountability demands it.

It bears repeating: Bad cops make the job dangerous for good cops.
Bad cops create a world in which all police are seen as a potential threat at every traffic stop, or noise complaint call.
Bad cops reduce cooperation between communities and investigators.
Bad cops are killing people and they are doing it with impunity and they've been doing it for a long time. And good cops who look the other way or make allowances slowly but surely become indistinguishable from the "bad apples."

We can't believe that shootings of unarmed or subdued suspects just started when cellphones got cameras. We are now just seeing with our own eyes what many have been describing to the disbelieving ears of society: some police act lawlessly and kill with alarming regularity when dealing with Black people in particular. Even though black men are only 6 percent of the U.S. population, they account for 40 percent of the unarmed men shot to death by police this year, according to a 2015 Washington Post analysis.

When this balance of power and accountability is lost, then we teeter into catastrophe and right now it is wildly out of whack and bluntly it has been forever.

There has not been a golden age of policing in the black community we can harken back to. In fact, an unwillingness to acknowledge the ugly history and continued culture within policing, particularly but not exclusively in the South, is part of the problem.

In my family, the story of the white man who killed my great-grandfather for refusing to sell him his land, includes the local sheriff riding shotgun for the killing. Does it shock us that the FBI has reported a coordinated effort by White supremacist groups to infiltrate police departments?

The Deputy police chief in Fruitland Florida, a 20 year veteran, resigned and an officer was fired last year after the FBI reported that he and a fellow officer both belonged to the Ku Klux Klan It was the second time in five years that Klansmen had been discovered in that same Police Department. In 2009, another officer in the same department resigned after photos of him in a white robe and klan hood revealed that was a leader of the local KKK.

And don't think this is just a few crooked backwoods sheriff departments. Consider this passage from the group CopsHoldingCops Accountable:

"A federal court found that members of a Los Angeles Sheriffs department formed a Neo Nazi gang and habitually terrorized the black community. Later, the Chicago police department fired Jon Burge, a detective with reputed ties to the Ku Klux Klan, after discovering he tortured over 100 black male suspects. Thereafter, the Mayor of Cleveland discovered that many of the city police locker rooms were infested with "White Power" graffiti. Years later, a Texas sheriff department discovered that two of its deputies were recruiters for the Klan."

So this isn't new, it is being revealed in ways that don't allow us to sink back into a false nostalgia.

When I covered the police beat for the Tampa Tribune, I encountered police who risked their lives to save strangers. Cops who brought food to a family after removing the abusive boyfriend and noticing the kids were hungry. I encountered the brave and decent people who protected and served with courage and a sense of duty and honor. I also encountered the cops who shook down drug dealers, who had a reputation among their colleagues and on the street for being shady and violent. And the line between the two isn't always clear.

The movie Crash does a great job of showing us the contradictions: The same racist cop who verbally humiliates a black man and then molests his wife in front of him during a roadside stop later dives into a burning car to save her life. The "good" cop who finds his partners racism distasteful, doesn't realize how much of the same poison he's absorbed until he panics and shoots a young black man innocently reaching for his statue of St. Christopher.

I know police know what's going on in their departments and among their colleagues. You go in with good intentions and get compromised when the thin blue line of silence and the responsibility of the job are in conflict. It is easier to play dumb, look the other way, and quietly enable the worst among you to define you, at least to the most violated populations.

This is usually the moment the conversation devolves into a "both sides are wrong"cul de sac. "It isn't just the police at fault. Bad attitudes by suspects needlessly escalate situations, too." So let me briefly say anytime one brushes with broad strokes there is danger. Some people falsely claim police brutality. Yes they sure do. But let's also deal with this reality: How often has someone who harms or kills a police officer - and lives to stand trial - not been convicted? When have they been given a light sentence?

Now ask yourself: How often has a police officer who harms or kills someone under circumstances that cause outrage escaped without any penalty whatsoever or with a minimal punishment?

The system is already set to protect the lives of law enforcement with harsher penalties, and it should. The system should also include harsher penalties for those who dishonor the badge and abuse the power and trust. Right now that is not the case. Not even close.

We don't need to restore the faith in law enforcement, we need to finally at long last come to an agreement about what policing means especially to those pushed to the margins.

What can we do in the face of the history and the killings and the unraveling? Police reflect the distrust, the divide, the fear of the general population and we must change our culture even as we restructure the idea of policing in America. I'll add a few ideas to the list of things that are true that must change:

We must change the nature of policing and we must change our relationship to each other. There are police working to change that culture, to truly protect and serve. They deserve our support. We have to get rid of the bad apples, but more than that we have to change the structure that allows them to be rot in the first place.