Every year, from November to March, dozens of bull sharks approach Mexico's Mayan Riviera to make its temperate and turquoise waters their home. The males linger near Cancun. The females, most of which are pregnant, opt for Playa del Carmen, a bustling tourist hub an hour south of Cancun.

Experts believe that the mothers-to-be are in search of a nursery, so when the time to give birth arrives, they swim to nearby fresh waters, only to return to Playa del Carmen with their young.

Many consider these top predators to be the most dangerous sharks; their knack for navigating shorelines and their ability to survive in both salt and fresh water increase the probability of human encounters. But locals claim the area's biggest threat during these four months is of another kind entirely: Fishermen who kill pregnant and baby bull sharks year after year.

According to marine biologist and shark expert Mauricio Hoyos, this is an issue that deserves to be addressed because it could hinder population growth and eventually cause decimation of this particular group.

The bull shark, or carcharhinus leucas, is classified by the International Union for Conservation of Nature (IUCN) as a low-risk, near threatened species, so it's not legally protected. Its meat in Mexico sells for little (two pounds cost less than $3), and feeds lots. This, experts say, makes them even harder to defend.

In Playa del Carmen, some conservation efforts have focused on stopping one man: Humberto Anduze Trujillo from nearby Puerto Morelos. Anduze is the only active shark fisherman in the area, according to the National Commission of Aquaculture and Fishing (CONAPESCA), but critics say his fishing alone is tangibly affecting the local bull shark population. Photos in which he poses proudly next to his day's catch have spread over the Internet in recent months, enraging many.

While several complaints have been filed in the last few years, CONAPESCA says it has yet to find a reason to stop him. Anduze's father holds a permit from the Ministry of Agriculture, Livestock, Rural Development, Fisheries and Food (SAGARPA) that allows for shark fishing from Punta Nizuc to Akumal (a distance of about 70 miles). The permit is up for renewal in a few weeks.

There is a fishing ban in place from May to July, which CONAPESCA says is meant to protect pregnant sharks, but that three-month period does not coincide with the bull shark season.

Critics assert there are irregularities in Anduze's fishing practices that could cost him the permit, but outside evidence is of little use. Authorities state that offenders must be caught red-handed for them to file a report, and scant resources make that a close-to-impossible task.

One fisherman, guilty or not, is not the heart of the problem; a lack of conservation measures, both on paper and in practice, is.

Local dive shops, non-profit organizations, scientists and others are taking matters into their own hands to protect these sharks, with the ultimate goal of creating a shark sanctuary in the entire state of Quintana Roo. First, they must prove to the Mexican government that the sharks visiting the area, and being killed, are pregnant and at risk so a fishing ban can be established.

To do so, the non-profit organization Mexico Azul is in talks with the National Fisheries Institute (INAPESCA) to conduct research funded by Mexico Azul to determine if there is enough data to justify a fishing ban.

When a shark is killed, it releases a hormone that alerts other sharks, so a fisherman could kill as little as one shark for the rest of them to be scared away for weeks at a time. Hoyos says his research is now and again hindered by Anduze. Last year, six female sharks were killed a day before he arrived in Playa del Carmen.

"The sharks disappeared for an entire month," he says. "We couldn't capture one shark."

When the sharks are gone, many pocketbooks feel the impact, too.

Scuba diving with bull sharks in Playa del Carmen is extremely popular. One dive can cost anywhere between $70 and $160, and Hoyos says one live shark alone can yield $220,000 per season (one thousand times more than one dead shark). Multiply that times 25, the record number of sharks counted in that area, and add hotel, transportation and food costs, and you get a profitable business that helps hundreds of local families keep afloat.

An increasing number of dive shops, Loria's included, uses bait to attract sharks during dives. (This type of dive can cost twice as much as a non-feeding dive). Some say it is this very practice that puts the sharks at further risk.

"One fisherman with one skiff is not a threat to the species," says Olga Lingard of Mexico Azul. "The problem is: If we feed the sharks, they aggregate, the fisherman goes where all of them are, sets his longline and takes out 15 sharks at once."

"When you feed the sharks, the fisherman knows where they are," he says. On the other hand, "feeding allows people to see the sharks. It changes their idea that they are evil, that they attack and eat humans. It turns them into ambassadors."

Shark feeding is a contentious topic in Playa del Carmen, and a separate issue in its own right. But most parties involved agree that the first step is to establish a fishing ban, followed by studies already underway to determine whether feeding should be practiced and, if so, how it should be regulated.

Well beyond the issue of fishing and shark feeding is an urgent need for awareness that will help dispel the notion that sharks are man-eaters that can be killed indiscriminately.

"It's a complex problem because young Anduze is only doing what his father and grandfather did, which up to a decade ago was seen favorably," says Alberto Friscione, of Saving Our Sharks and one of the area's most renowned divers. "Back then, if you caught a shark you were seen as a hero."

The fact that Anduze is capturing pregnant sharks with a permit doesn't make it morally acceptable, Friscione adds.

In the last 30 years, the overall shark population worldwide has decreased by 90 percent, and yet an estimated 100 million sharks continue to be killed every year. Loria reminds us that without sharks, the marine ecology would suffer drastic changes. "They are on top of the food chain. They keep the reefs healthy."

Honduras declared itself a shark sanctuary in 2011, and if Mexico does the same for the state of Quintana Roo, we would be one step closer to turning the entire Mesoamerican Barrier Reef, the second largest in the world, into a sanctuary. "And that would be a big step," says Loria.

These are some of the organizations involved in protecting Playa del Carmen's bull sharks: Mexico Azul, Saving Our Sharks, Pelagios Kakunja, the National Commission of Natural Protected Areas (CONANP), Razonatura and COBI. 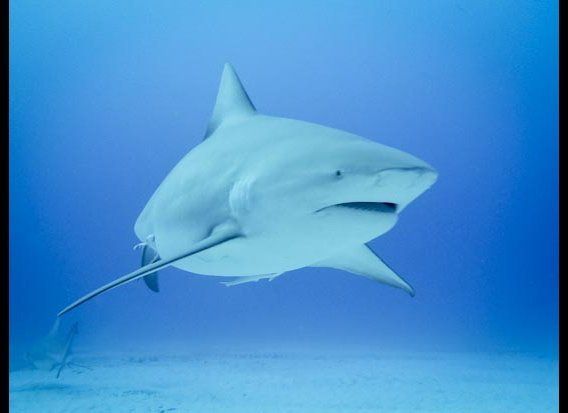