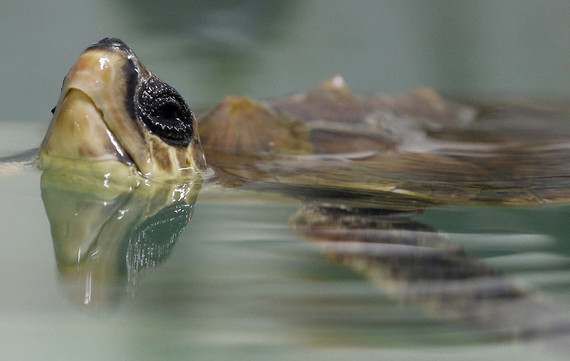 Sea turtles have been around for 150 million years, but today's pace of climate change represents an existential challenge. Regis Duvignau/Reuters

Seven of the world's eight sea turtles species nest on the beaches of Mexico - undertaking the serious business of reproduction in 17 of the country's 32 states. That means 53% of Mexican national territory, which is flanked by both the Pacific and Atlantic Oceans, is home to sea turtles.

But in a country with one of the world's most extensive shorelines, nesting beaches for turtles are disappearing. Climate change, human development, and the complex interaction between the two are to blame.

Across the world, turtle species are already endangered: most populations have seen a drastic decline of more than 80% in under 20 years. Mexico has detected a sharp decrease in the populations of Leatherback turtle (Dermochelys coriacea), and the species is now critically endangered. Similarly, the number of Hawksbill turtles nesting (Eretmochelys imbricata) on the sanctuary beaches of the Yucatan Peninsula has dropped from 6,400 nests in 1999 to less than 2,400 in 2004 - a 63% decrease in five years.

Beautiful beaches, so many tourists

Of Mexico's tourism zones, 45% are on the coast, and five of the country's top 10 tourist destinations are beach locations (Cancun and Cozumel, Los Cabos, Puerto Vallarta, Acapulco and Mazatlan).

Tourism is a fundamental activity for Mexico, representing 8% percent of gross domestic product. But it has grown in an under-regulated and disorderly fashion, devastating coastal environments and mangrove swamps. This has led to severe environmental degradation of the country's coastline.

Private developers and the government have built breakwaters, jetties, and tetrapods, as well as dams and levees, coastal roads, and beachfront hotels along the coast. All this construction fundamentally changes the physical form of beaches, and generally not for the better (when it comes to turtles). Structures aimed at protecting coastal property refract energy away from the shore, which can cause erosion and increase flows.

For turtles, such changes can be deadly. Erosion and accretion (accumulation of sand) are part of the nature of beaches. But when these processes are unnaturally intensified during the nesting-hatching season, females may experience difficulties in nesting and eggs can be exposed, flooded or thrown out of the nest.

Hotel lighting can also have a negative impact on the nesting grounds of sea turtles. Nighttime light pollutes nesting beaches, altering where sea turtles choose nesting sites, how they return to the sea after nesting, and how hatchlings find the sea after emerging from their nest.

Sea turtles have inhabited the world's oceans for 150 million years, and have survived natural climate change events, including the last Ice Age. Today, they're protected both by global regulation and Mexican law.

But the current pace of climate change is faster than anything experienced in the last 10,000 years. Add that to existing vulnerability from fisheries, waterfront development and beach erosion, and sea turtles are facing an unprecedented threat to their very existence.

Mexico's weather is getting more extreme. Studies show a 66% probability that the country's tropical cyclones have become more intense since 1970. From 1979's Hurricane Liza in the Pacific, which killed thousands in Baja California, to the simultaneous hurricanes Ingrid and Manuel in 2013, which dropped more than 40 inches of rain on Mexico's southern coast and killed a combined 133 people, these storms leave memorable human tragedies.

The effects of rising sea levels are similarly devastating for turtle habitats. Currently, researchers predict a rise of 18 to 38cm by 2099. This would indubitably affect the availability of nesting areas on low-level, narrow and island beaches.

Mexico's sea turtles, which also live all over the world, collectively require large areas of ocean and coast for different life stages. With the gradual rise in sea level, meso beach - that is, the middle beach area, where wave energy and wind interact - will become infra beach (the part where waves hit most often). That means the loss of areas that about 40% of turtles prefer for nesting.

A recent study found that since 2003:

There was a general warming trend for nests, with a mean increase in reconstructed nest temperatures for different months of between 0.36 and 0.49°C for the last 100 years.

Hence, globally warming temperatures may well lead to the production of only female hatchlings, a direct route to extinction.

Mexico's government is taking some steps to address the various challenges faced by sea turtles. The Ministry of the Environment and Natural Resources is responsible for coordinating a national sea-turtle conservancy programme. Each of Mexico's seven species of sea turtles has its own specific conservation and recuperation program that includes species-based research, habitat protection, resource management and citizen engagement.

The commission oversees a sanctuary programme for the comparatively tiny Lora turtle (Lepidochelys kempii), which nests at midday and only on specific Atlantic beaches in Tamaulipas state. Across the country, for every species, it also encourages tourists and locals to volunteer to protect turtle eggs until they hatch.

But we need to do more. I say that based on not just my professional experience as marine biologist but also on my upbringing in the Yucatan Peninsula, where at least five of Mexico's seven turtle species nest.

More research would be a good start. Mexico's National Commission of Natural Protected Areas annually monitors temperature and incubation success of the Olive Ridley (Lepidochelys olivacea) clutches (broods). This allows scientists to better manage the offspring cycle, observe the long-term effects of climate change on incubation, and transfer babies born in incubation to nesting pens in sanctuaries. But such research is lacking for other species.

The commission should also improve projections and planning. Flores Aguirre, in a 2014 study on clutches of the critically endangered Hawksbill turtle in Mexico's Caribbean Contoy Island, highlights the importance of planning ahead to determine how environmental changes affect populations of sea turtles. Better planning would also help us prevent overlap in nesting of Hawskbill and Green sea turtles (Chelonia mydas); the latter tends to destroy existing Hawksbill nests in making their own.

The fact is, the same hurricanes, rising sea levels and over-development that hurt nesting turtles also negatively affect the tourism activities that are so popular on Mexico's beaches. We must recognise the need for human development to coexist with the protection of the nesting beaches of sea turtles. For cities such as Cancun and Puerto Vallarta, beaches have a potent economic value. Protecting the beaches for people will also save sea turtles' breeding habitat.

Tourists also benefit when we ban vehicles from driving on the beaches (to avoid crushing nesting sites and sunbathers), dim hotel lights (to limit light pollution) and build hotels further from the sea (to prevent flooding damage and give turtles some space). We should also consider, in the construction of coastal protection, conservation areas for nesting sea turtles.

Mexico can keep its place as one of the most visited tourist destinations in the world by respecting its coastal ecosystems. In doing so, it will also protect the sea turtles that call its beaches home.