It's 96 degrees (Fahrenheit) in Los Angeles as I pen this story. We are in the midst of yet another vicious heatwave. It's tinderbox-dry outside and this is the third consecutive drought year throughout California. We are in extreme fire danger. Again.

Join Earth Dr Reese Halter from Los Angeles, California in yet another segment of SOS.

Yesterday the epic news on the wire was based upon 20 years of NASA satellite data showing very clearly that six glaciers in Western Antarctica are rapidly melting into the Amundsen Sea. It will raise ocean levels worldwide by a minimum of four feet. "The retreat of these glaciers seems to be unstoppable," says glaciologist Professor Eric Rignot of University of California at Irvine and NASA. 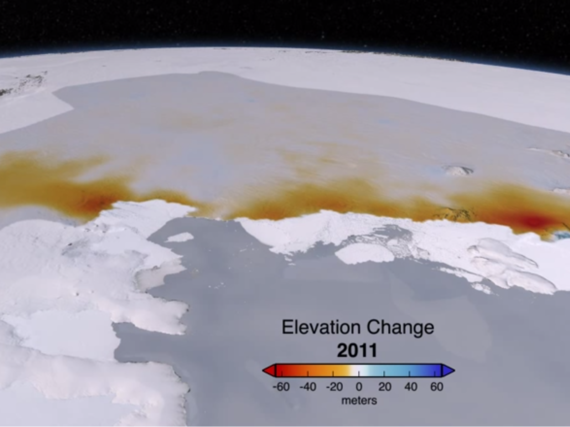 A massive slab of ice about 10 percent of Antarctica is melting. It contains enough water to raise global sea levels by an astounding 15 feet. Photo credit: businessinsider.com

This comes on the heels of the previous day's discovery of unprecedented rising greenhouse gases strengthening winds, that normally bring rainfall to southern Australia, instead those winds are now driving that much needed precipitation southward toward Antarctica.

In fact, temperatures have risen so dramatically that the Southern Ocean winds are stronger now than at any other time in the past 1,000 years. This is terrible news for agriculture in southern Australia. "As greenhouse gases continue to rise we'll get fewer storms chased up into Australia," says paleo-climatologist Dr Nerilie Abram of the Australian National University. 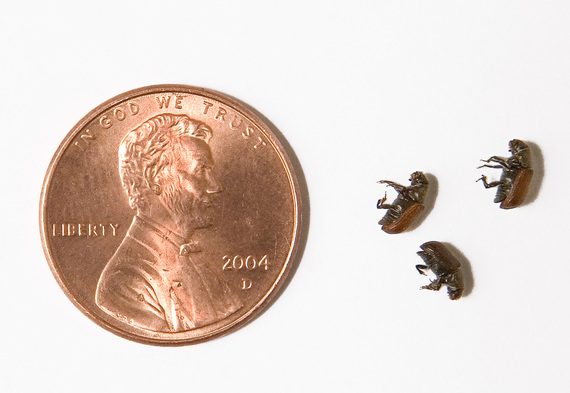 In our ever-warming world, trillions of indigenous bark beetles have killed over 30 billion mature conifers throughout Western North America. In mountain areas where cold temperatures previously prevented these insects from thriving, our once-healthy but now water-starved trees are becoming more and more vulnerable to the voracious appetite of these deadly pests. Photo credit: Warren Carlton.

Last week, the National Climate Assessment revealed the following: Human-induced climate disruption is being felt in every corner of the United States. Water is becoming scarcer in dry regions. Torrential rainfalls are increasing in wet regions. Heatwaves are becoming more common and more severe. Wildfires are growing worse. Thirty billion mature pines are dead across the western mountains from heat-loving insect epidemics.

And all this has occurred from an average warming of just slightly less than 2 degrees (Fahrenheit) over most land areas across America. "Summers are longer and hotter, and extended periods of summer heat last longer than any living American has ever experienced," concluded a panel of eminent scientists that contributed to the National Climate Assessment. 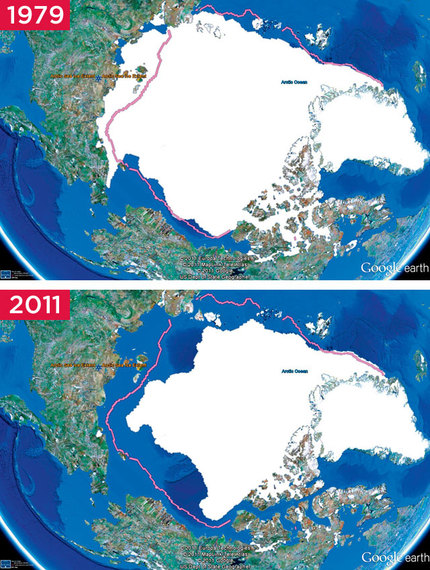 Meanwhile at the North Pole the Arctic Ocean is missing an astonishing amount of older, thicker ice as well as summer ice cover as evidence by these two pictures. Photo credit: Google Earth.

It's not only melting icecaps that are an irrefutable harbinger of a run-away warming Earth, tree rings are showing my colleagues that wild weather is vividly on the rise in southeastern Australia and New Zealand.

More droughts and more flooding are seen from New Zealand's Kauri tree ring growth patterns as researchers have glimpsed 4,000 years back in time. The last 100 years have brought the most El Ninos (droughts) and La Ninas (floods) that these sentinels of nature have experienced in four millenniums. This undeniable trend directly correlates with the increased burning of fossil fuels in the Anthropocene by Homo sapiens. 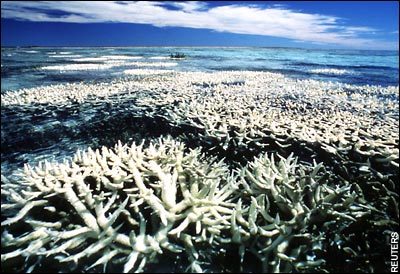 Earlier this spring, the United Nations (UN) Climate Report warned the worst is yet to come. It noted that human-induced climate disruption has begun to thwart farmers growing food, thus impinging upon the global food supply. It specifically pointed out that the oceans (which provides three out of every four breaths of oxygen for 7.2 billion humans) are in dire trouble with warming temperatures and ocean acidification having already killed three quarters of the Great Barrier Reef, the largest coral reef on the globe. The UN has issued a clarion wake-up call stating that the forthcoming climate disruption is unprecedented in type and scale to the wellbeing, health and survival of the human race.

In the early 1980s the annual price tag from wild weather cost the giant reinsurer Munich Re $50B, in the past decade that sticker price has increased fourfold to almost $200 billion per annum. 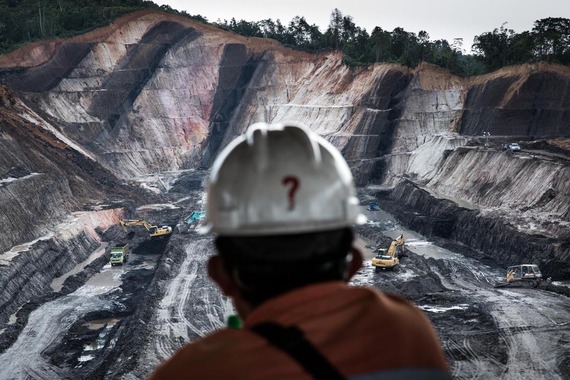 Mountains of coal are being barged down the polluted Mahakam River every few moments. Indonesia is racing to supply the insatiable demand for coal from China and India. Photo credit: greenpeace.org

This autumn there is about a 75 to 80 percent probability of a fierce El Nino as the Western Pacific is currently off the charts hot. Some experts are predicting that it could be biggest global weather story of 2014.

I strongly suggest that it would be far more prudent to spend $2 trillion annually on future-proofing every town and city on planet Earth from the pending wrath of wild weather rather than subsidizing the demise of the human race and most other life-forms, too.

Earth Dr Reese Halter is a broadcaster, biologist, educator and author of the upcoming book Shepherding the Sea: The Race to Save Our Oceans.