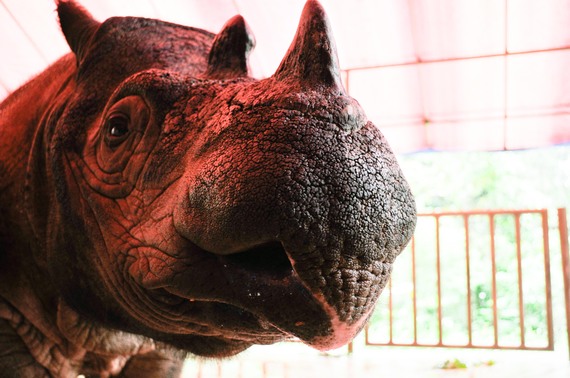 One year after traveling to the other side of the world to meet a mate and contribute to the survival of his critically-endangered species, Cincinnati-born Sumatran rhino Harapan is moving closer to that goal. 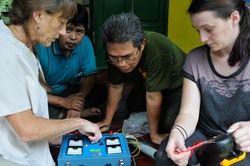 A team of scientists, vets and keepers assembled in Harapan's new home at the 250-acre Sumatran Rhino Sanctuary (SRS) in Way Kambas National Park last week to collect semen from the 9-year-old rhino and his older brother, Andalas, the only captive male Sumatran rhino on the planet proven to be fertile. Samples collected from Harapan (which means "hope" in Indonesian) indicate that there's #HopeforHarry! Photo: CREW and SRS testing and demonstrating equipment. 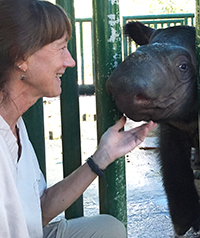 "We found motile sperm in Harapan's samples, which confirms that he should now be fertile and ready to breed," said Dr. Terri Roth, Director of Cincinnati Zoo's Center for Conservation & Research of Endangered Wildlife (CREW) and the person who led the team that unraveled the mysteries of Sumatran rhino reproduction and, in 2001, produced Andalas, the first calf bred and born in captivity in 112 years. "This species is on the brink of extinction, but we believe there is still time to save it. We rejoiced when Andalas produced a male calf in 2012 and again this year when his second baby, Delilah, was born. Our greatest hope is that Harapan will have the same success. We now know that it's possible." Photo: Roth seeing Andalas' baby Delilah for the first time.

Harapan has some options. There are three eligible adult females at SRS. They are Rosa, Bina and Ratu, who is the mother of four-year-old Andatu and six-month-old Delilah. Keepers perform regular ultrasounds on the girls that help them know when to put males and females together to breed. They are kept close but apart, each in his/her own 25-acre forest plot, until the time is right. 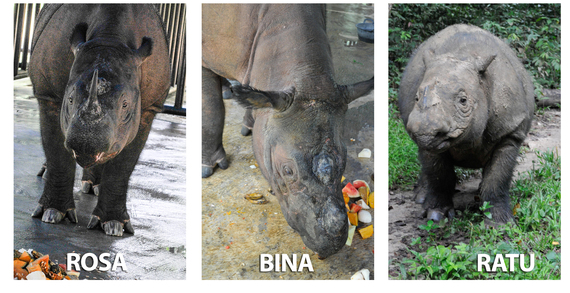 With fewer than 100 left in the world, every Sumatran rhino birth is significant. The wild population is split among Way Kambas and two other parks on the island of Sumatra, which is about 1,000 miles long, and it's possible that the shy and solitary individuals are not encountering each other. (There is also a small pocket, 3-10 individuals, in Borneo.) To make things more complicated, females need to be around a male in order to ovulate and can develop reproductive issues if they don't mate and get pregnant. These and other Sumatran rhino reproduction secrets discovered by CREW, including how to use supplemental hormones to keep a pregnancy, finally resulted in the birth of three rhino calves (Andalas, Harapan and Suci) at the Cincinnati Zoo.

Lessons learned by CREW have been transferred to the staff at SRS along with the last of its Sumatran rhinos. The departure of Harapan last year ended the Zoo's breeding program but Roth and team remain committed to the survival of this species. Photo below: SRS keeper feeding Harapan after collection procedure 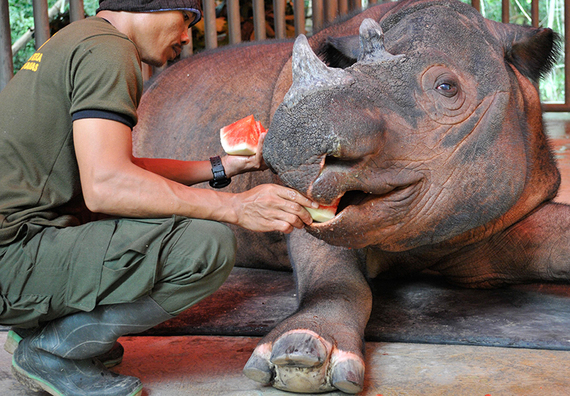 "The success of the breeding program at SRS is the last, best hope for these unique creatures," said Roth. "The keepers and vets at the sanctuary are taking great care of the rhinos and we are happy to collaborate and share techniques that could result in more births." 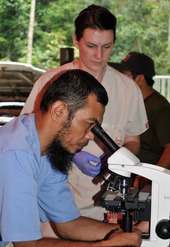 That's why Roth and post-doctoral scientist Dr. Jessye Wojtusik made the recent trip to SRS. Veterinarian Dr. Zulfi Arsan got hands-on (and hands in) experience using the semen collection equipment that the CREW duo brought along and demonstrated. In between collections, slides were examined under the microscope that Wojtusik handled with care during the 24-plus hour journey to SRS. 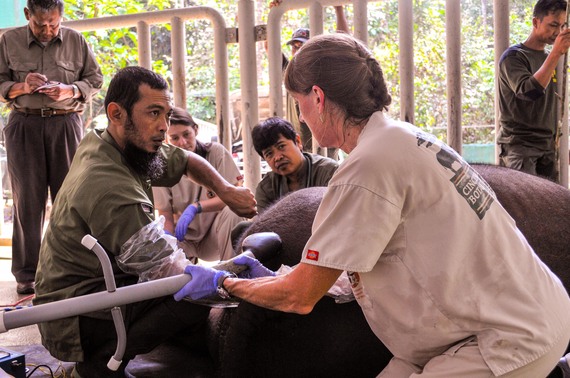 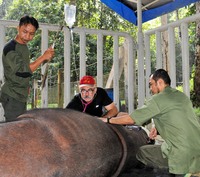 Dr. Benn Bryant, veterinarian from Taronga Western Plains Zoo who also assisted with an eye surgery for Andalas in 2014, came from Australia to administer anesthesia and share best practices with the SRS vets. 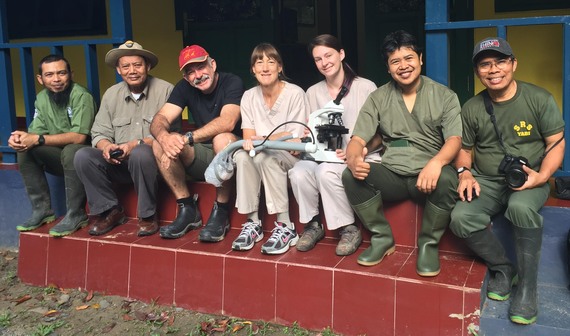 About the Sumatran Rhino Breeding Program at the Cincinnati Zoo
After years of research, and several lost pregnancies, CREW scientists at the Cincinnati Zoo unraveled the mysteries of Sumatran rhino reproduction and, in 2001, produced Andalas, the first calf bred and born in captivity in 112 years. In 2004, his sister, Suci, was born, and in 2007, Harapan arrived. Between 2001 and 2012, the Cincinnati Zoo held the distinction as the only place successfully breeding this endangered species. The Zoo worked closely with Indonesian and Malaysian colleagues to transfer knowledge and techniques so that they too could succeed. In 2007, the Cincinnati and Los Angeles Zoos agreed to send Andalas to the SRS to replace an old, infertile bull. That sacrifice on the part of the LA Zoo, where Andalas was living at the time of his transfer, resulted in the births of Andatu and Delilah.