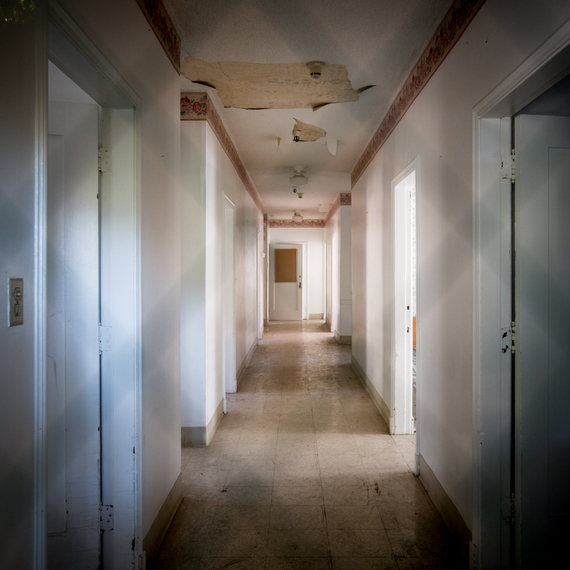 The intersection of stardom and madness, mystery and decay meet at the crossroads of Rockhaven Sanitarium. The once-thriving refuge for troubled minds now sits fallow, crumbling and silent as it awaits an uncertain future, much like its past residents.

Tall, thick hedges and stone walls made an oasis of Rockhaven in Montrose, California, an institute that had kept such low profile for so many years that even neighbors had forgotten it existed -- or never even knew it was there -- until the site was abandoned in 2006 and the greenery came down. 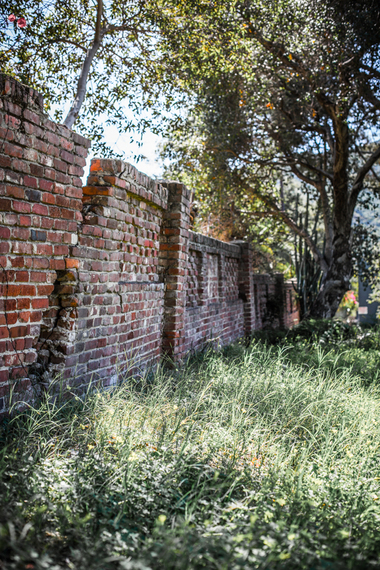 Founded in 1926, Rockhaven has several claims to fame, and one of the most unique is that it was America's first woman-founded and woman-only humane health treatment facility for "mild mental and nervous disorders." Another claim to fame was its celebrity residents such as Marilyn Monroe's mother Gladys Eley, and Billie Burke, also known as Glinda in The Wizard Of Oz.

There were no cells at Rockhaven, no shackles, no manacles, no solitary confinement and no horrific abuse like what we've come to associate with the words "sanitarium" and "asylum" through media and pop culture. 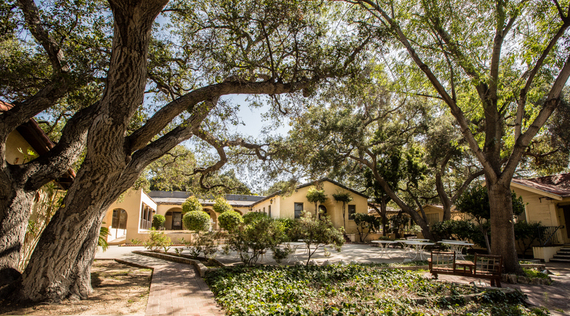 Agnes Richards founded Rockhaven after working as a psychiatric nurse in some of America's worst and cruelest of asylums. Appalled not just by the inhumane living conditions, innate structural violence and abusive treatment of mostly female patients -- those were the days in which lesbianism, menopause, hysteria and even deviating from societal norms of femininity, could get you a lifetime's stay in an institution -- she began to see that once a patient was admitted to a facility, there was no expectation that even treatable mental illnesses could or would be cured, and so hardly anyone ever was. All the while, these vulnerable patients were treated deplorably, often abused and eventually abandoned by the families, and mostly male family members, who institutionalized them.

Rockhaven was the complete opposite. Agnes Richards created a tranquil living space in a sprawling three-and-a-half acre property with bungalows that even in its abandoned state today looks more like a resort than an asylum. Brightly colored rooms, inviting interior designs and classic craftsman and Spanish Colonial Revival architecture invoke a feeling of calm beauty, a reprieve from the bustling Los Angeles outside Rockhaven's boundaries. Richards's goal was that her residents be treated with dignity and grace, they were encouraged to have daily visitors, and Rockhaven hosted a number of events over the course of the year in which family and friends were encouraged to visit, all of which are the very antithesis of treatment practices in that time. 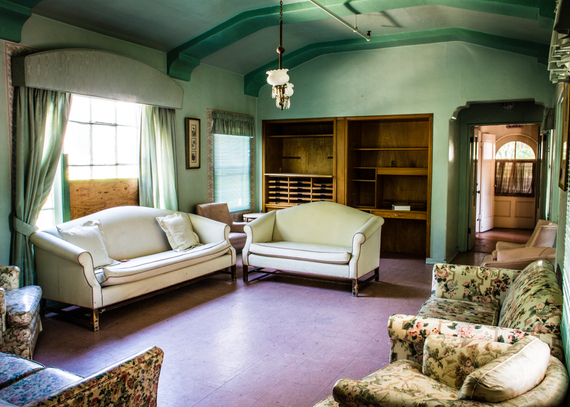 Rockhaven's residents were all expected to dress themselves each day and join the others for three meals in the dining hall. Rockhaven offered art therapy, field trips and occupational therapy, and while it did also perform insulin treatment, hydrotherapy and electroshock therapy, it was not administered in the often non-consenual manner as other institutions. 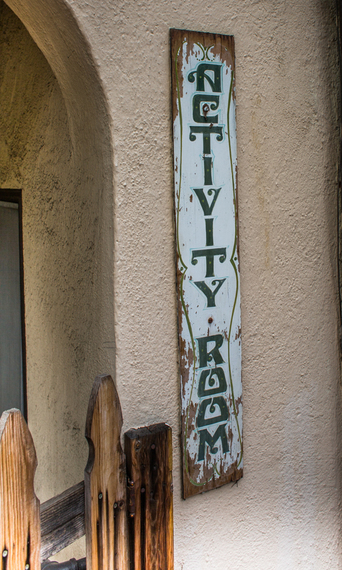 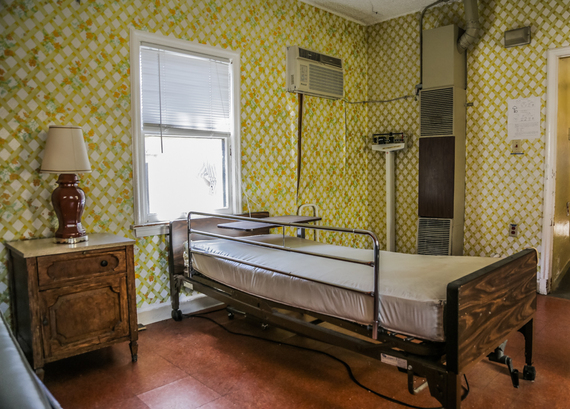 Jason House has extensively photographed the abandoned grounds and these visual stories of Rockhaven's now-silent halls will be the focal point of an exhibit "Sanitarium" that is running in Downtown Los Angeles from August 13-September 8, 2015.

House first "discovered" Rockhaven in the fall of 2013 when now-Friends of Rockhaven board member and writer Emily Lanigan learned the group would be starting tours of the abandoned sanitarium. House and Lanigan were among the first to sign up for a glimpse inside, an enchantment which has blossomed into a collaborative coffee table book book exploring the long and storied history of the asylum from the 1920s to the present; House's current exhibit is a preview of photos that will eventually be included in their book.

Lanigan says, "The story of Rockhaven is both an 'is' and a 'was.' Jason's photos capture the weight of all the hundreds of women's lives who passed through its halls." 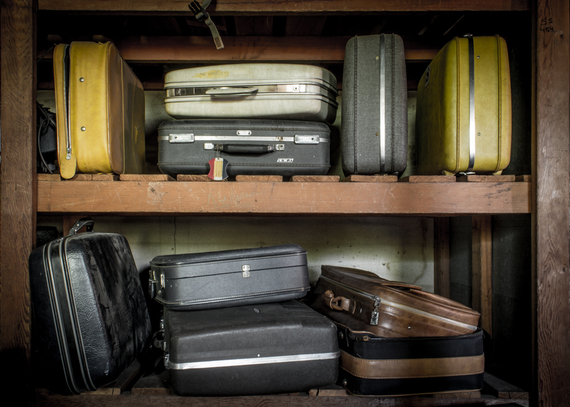 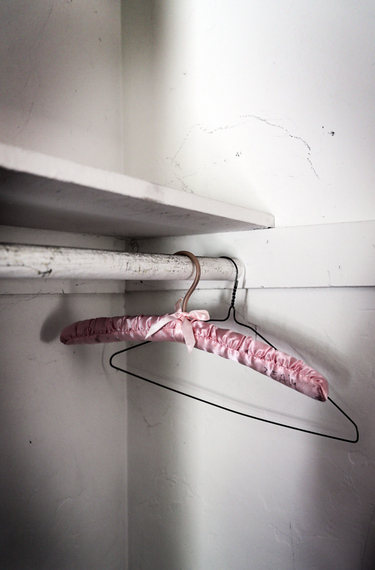 The "is" of Rockhaven is not only its current state of disrepair, one that preservation group Friends of Rockhaven works to upkeep as much as the City of Glendale permits, but it is also under constant threat of being razed by developers for condos or more bankable assets on this valuable acreage. Tearing down a site of such historical value is a baffling perspective when thinking of Rockhaven's context in not only women's history in America, but also mental health treatment, as well as it being the last intact and standing sanitarium of its kind in the LA area.

Says House shrugging, "Some people don't want to memorialize something that was considered so scandalous in the past." During the long course of Rockhaven's history, a family member's residence in a mental institution was not something that anyone publicized and the institute itself had ongoing problems with neighbors as they objected to having "crazy people" living in close environs. In that sense, not much has changed in the US since mental health issues are still taboo talking points and it is only until recently that medical professionals, patients and their families are beginning to openly speak about mental illness in attempts to end the stigma.

Lanigan notes that there were several other sanitariums in the same area as Rockhaven -- the Crescenta Valley was said to have "healing air" -- among them the infamous Kimball Sanitarium (of Frances Farmer and Bela Lugosi notoriety) where the traditional and more violent forms of treatment were used, methods we'd now consider torture. In stark contrast House says, "Rockhaven was a place where people were slowly and quietly losing their grasp with reality."

House quotes a sanitarium patient in 1945 from Maxine Harris's Women of the Asylum: Voices from Behind the Walls:

You wanted to get well. You never had a conscious moment in which you were not aware of being sick. Asked your greatest wish in life you would have replied at once -- sanity. In the world outside, people longed desperately to be millionaires, movie actors, club presidents, even novelists. But nowhere, save the madhouse, did mental health get its share of prayers. 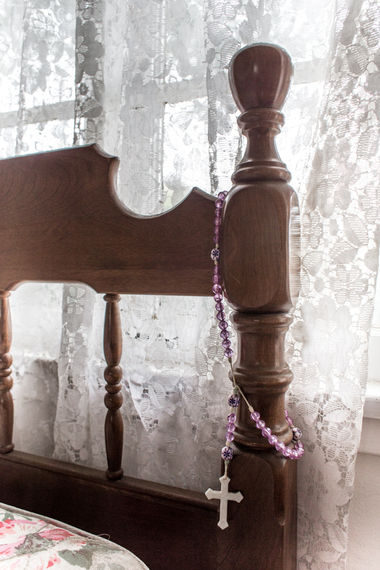 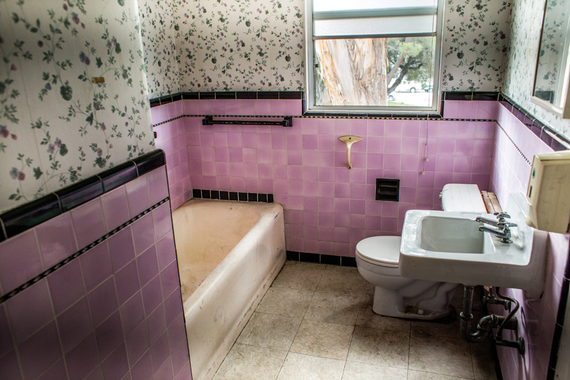 While the coffee table book House and Lanigan are working on will include House's contemporary photos of the empty and abandoned Rockhaven juxtaposed with historical photos, documents and first person accounts of an active and thriving Rockhaven, House's current exhibit has an express goal of capturing images and presenting them without too much narrative or historical spin. His goal is, "To capture the impression of the people that were there, the energy they left behind." House calls himself a "frustrated archeologist" and "wannabe Philip Marlowe" as he visually describes the objects and spaces people have abandoned: "Oftentimes I have no real context for the places I explore, so it's a mystery trying to figure it all out."

I use an anthropological/humanistic perspective to piece together the people who were there. It's less about the lines and beauty of decay, and more about the universal qualities of the space and who might have lived there. I'm not trying to create a perfectly framed iconic image, I'm trying to capture a moment, a feeling, an emotion. If people come away from my photos actively trying to piece it together, actively feeling moved and identifying with the people who were once there but no longer, then I feel the photograph succeeds. If I'm too prescriptive, telling people what they're looking at or when it happened, then it doesn't allow for as much of that connection.

He wants to provide only a little context to the space without giving too much away, allowing the viewer's imagination to put its own stories of Rockhaven together. 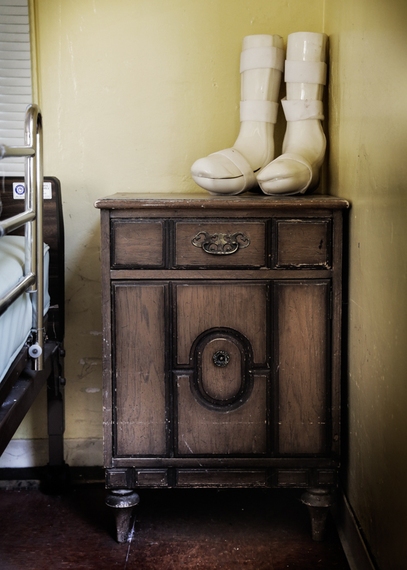 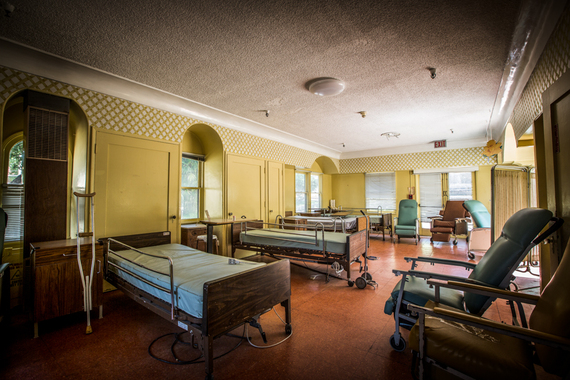 Rockhaven itself is currently owned by the City of Glendale, and Friends of Rockhaven do monthly tours of the site as well as maintain the general upkeep of the property. Friends of Rockhaven is also working towards getting the site recognized as a historically designated place, which would then protect it from further development and provide necessary funds to repair the site to museum standards.

With or without official historical preservation recognition, Rockhaven has incredible cultural and social value, not just in American medical history, but also, as Lanigan says, "Rockhaven is a really important part of women's history, feminist history and mental health history, as well as Los Angeles and Hollywood history. Even in our current landscape of women with mental health issues still being marginalized and dismissed as 'hysterical,' the value of Rockhaven's story can't be quantified."

Lanigan goes further, "Mental illness is not just a personal disease, it's also a social disease, a family disease and a generational disease. One person can discharge lasting eruptions through families even when others don't suffer from a mental illness themselves," a perspective that certainly falls in line with Agnes Richards's Rockhaven ethos. 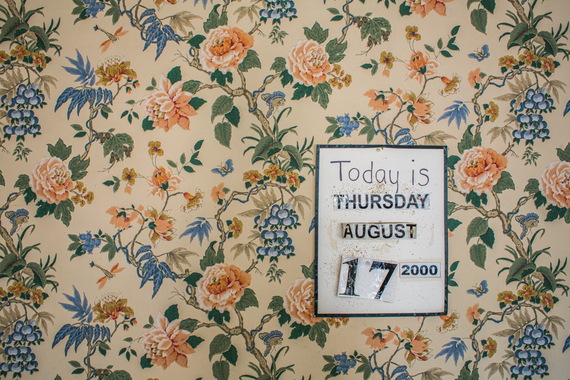 About his photographs, House also says:

They're all about moments in an individual's time -- an ever-passing, ever-shifting, ever-changing time. We make our small dents in our own personal universes and then we move on; I try to make photographic monuments from those dents in a way, monuments that capture the tension between something that is inspiring and something that is simultaneously tragic.

House's exhibit not only displays the beautiful decrepitude of abandoned Rockhaven and its importance to the Los Angeles landscape, but also shines a light on the revolutionary concept behind the space: a mental health facility with a "by women for women" approach that recognized and valued women's innate humanity. 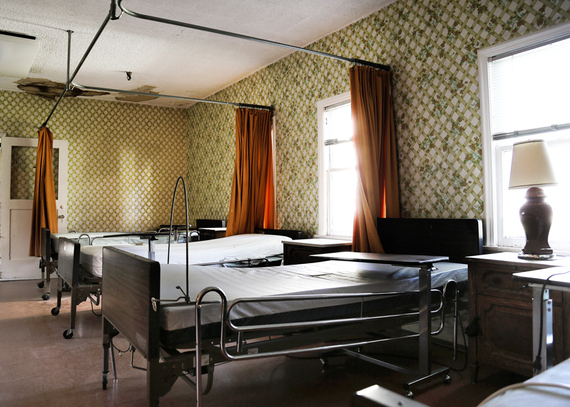 Rockhaven itself, and House's accompanying images, vibrate with a history so rich and unique there should be no question that the site be preserved not just for the fascination of curious visitors, but as a reminder that women have and continue to provide effective alternatives to often male-dominated medical, social and cultural paradigms.

In the stillness of Rockhaven, its stasis of abandonment, we can take a moment to admire the staying power of these feminist pioneers and the vast socio-cultural debt we owe them for their visionary humanitarian work. 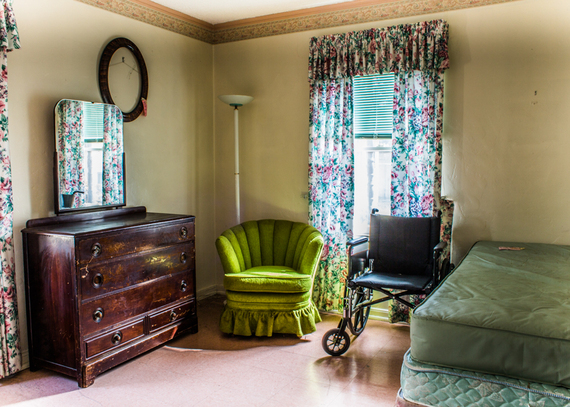 Jason House's photography exhibit "Sanitarium" runs from August 13-September 8, 2015 at Gallery 417 Downtown in the also-historic Los Angeles Subway Terminal Building which dates back to 1925, right around the time Agnes Richards founded Rockhaven itself. 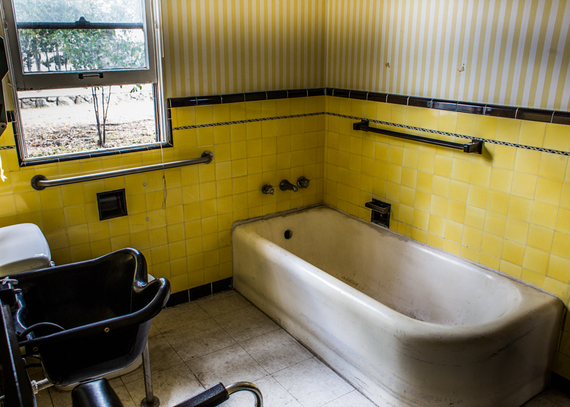 All images provided courtesy of Jason House. All rights reserved.