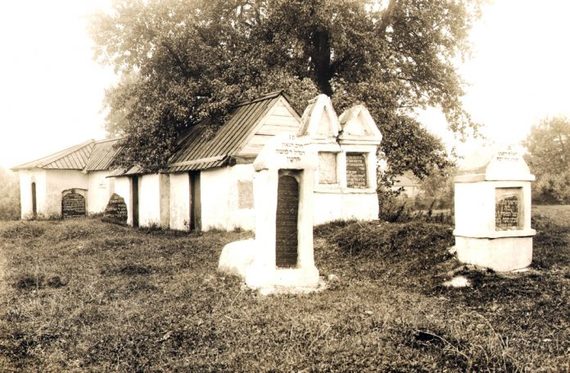 Even when every gravestone is removed, and no sign is left but a growing forest -- the place is sacred ground.

Which is why the recent controversy over the Old Jewish Cemetery in Vilna, Lithuania is so disturbing and controversial.

Vilna was one of the most illustrious Jewish communities of pre-Holocaust Europe and a European Union financed project is about to pour millions of tons of concrete on its Old Jewish Cemetery.

Invading Germans and their Lithuania collaborators murdered 206,800 Jews -- including almost all the Jews of Vilna shot in the Paneriai forest-- in 1941. They burned all the synagogues and destroyed most of the cemeteries. Under Soviet rule, Jewish relics were further demolished.

For 500 years the Jewish community buried their dead at the Old Jewish Cemetery at Piramónt. But after the war the gravestones were removed, and a Soviet sports arena was built in the middle of the cemetery without removing any remains.

Although the remains of Vilna's most famous scholar, the Vilna Gaon, Rabbi Eliyahu ben Shlomo Zalman, were removed from the Old Jewish Cemetery, the remains of hundreds, perhaps thousands of Jews are still buried there. As Prof. Shnayer Leiman noted in Matzav, "the remains of some of the greatest rabbis, Jewish martyrs, and pious women through the centuries," are buried there.

Which is why the small Jewish community of Lithuania has been fighting to save whatever is left from being buried under a newly planned, and EU financed, conference center.

Yes, a conference center on the cemetery.

Prof. Dovid Katz, a stalwart guardian of Lithuanian Jewish memory and Yiddish, wrote a comprehensive article in Times of Israel in 2015 when the plans were revealed, detailing the international opposition to the convention center idea. The government had promised in 2009 to leave the cemetery alone even after the decommissioning of the stadium. "So why would the Lithuanian government continue to pursue the project with ever more political capital instead of simply moving the project elsewhere?" asks Prof. Katz. Theories range from nationalistic reasons to political graft and beyond. Meanwhile, plans are moving forward, as opposed to being altered.

If the Jewish community, and other who stand against this desecration of a holy site keep up pressure on the EU and Vilna's government, they will have to find a new place for the conference center.

According to Jewish law, fighting for the preservation of a Jewish cemetery is mitzvah. As Prof. Leiman points out it seems to be a case of Meis Mitzvah, an abandoned corpse whose burial is obligatory on the one who finds it.

More that 25,000 people have signed a petition drafted by Vilna resident Ruta Bloshtein, and signed by Vilna's rabbis, demanding the project be moved, please consider adding your name.

For the latest on the scandal, visit DefendingHistory.com.