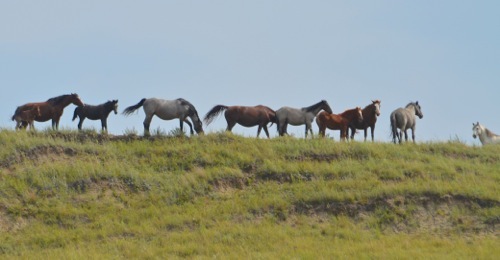 Theodore Roosevelt never foresaw unprecedented human population pressures and certainly not Big Oil on the horizon when he first became enraptured by the North Dakota Badlands. The former President and Father of Conservation's Elkhorn Ranch is preserved within the boundaries of the national park that bears his name, and three of North America's most charismatic species inhabit the 70,416 acre ecosystem that must be managed for other wildlife as well. Feral "wild" horses generate the most emotion in the public; evoking the romance, freedom and untouched wilderness associated with the American West. The horses, descendants of stock originally brought to North America by the Spanish, are now mixed with other formerly domesticated stock. Second on the list would be the bison, commonly called "buffalo" in the colloquial lexicon and forever seared in cinematic memory as the First Nation's "Tatanka" from "Dances With Wolves."

I sat down with Blake McCann, the Resource Management Biologist at Theodore Roosevelt National Park (TRNP), during my annual solo camping trip to the badlands. I was motivated by nostalgia and a desire to know the fate of the wild horses and bison that were culled from the park in September of 2013. 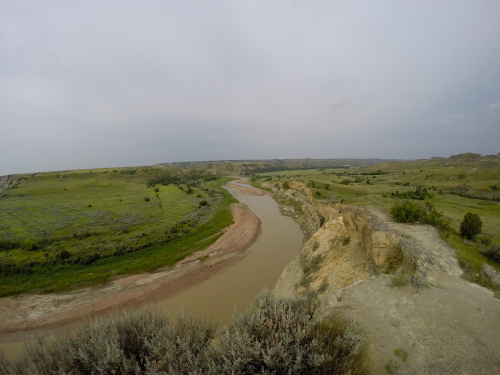 The park's rugged terrain offers limited grazing resources, and ranches on the Little Missouri National Grasslands, as well as a checkerboard of US Forest Service, State, and other private lands surround its fenced boundaries. Unbridled exploration for Bakken Oil threatens not only the soundscape, but also once pristine vistas. The proliferation of fracking and drilling rigs is an unavoidable and jarring intrusion along the park's perimeter. This unnatural juxtaposition of human activity and nature is fodder for the flames of fiery debate. And in the fight for natural preservation, no other animal evokes as much passionate discussion and media attention as Equus caballus. 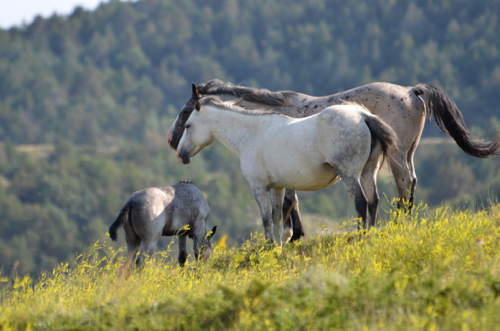 Before McCann took his job a little over a year ago, the culling of the wild horses (the park's official stance is that they are feral) brought a significant amount of bad press. The biggest fear for preservationists and horse enthusiasts was that sending the culled horses to auction would result in slaughterhouses winning the bids, with "viande de cheval" appearing on menus in France and gourmet eateries in Philadelphia and Brooklyn.

A commonly made mistake is confusing the National Park Service (NPS) with the Bureau of Land Management (BLM). BLM is in the news these days and the criticism is rampant over accusations of herd mismanagement and worse.

McCann said he immediately realized that it would be prudent to establish good communications with advocacy groups and critics before the wild horse culling in 2013. Collaboration with Legacy Mustang Preservation resulted in over thirty horses successfully placed there, and the remainder of the 103 captured horses going to private individuals. Legacy Mustang competed with other bidders at auction. "The primary service that advocacy groups provided was advertising of the horses and after-purchase support through their networks of concerned individuals," McCann explained.

Esoteric thinkers might find themselves at odds with biologists when it comes to what defines best practices in maintaining the health and well being of animals placed under human stewardship.

Citing a delicate balance between "principle vs. practice," McCann says he finds himself challenged to find the balance between what is politically correct and what is scientifically logical. How does one ensure that a herd is managed so that they have enough grazing and forage in hot, dry years as opposed to the cool, wet summer of 2014? Officials have devised a "forage allocation model" which projects how many animals the park can support.

Periodic roundups are conducted to keep the horses within sustainable population goals.

Census tallies indicate that prior to the September 2013 roundup, 213 individuals ranging from forty-seven foals to seventeen 13-year-olds and over lived within park boundaries. Of the older horses, ten were mares, and seven were stallions. 103 horses were culled during the 2013 roundup as follows:

In an effort to minimize or avoid roundups in the future--events which are traumatic to both horses and the public--officials are hopeful a joint study with Colorado State University's Department of Biomedical Sciences will offer some solutions. Scientists have been studying the contraceptive GonaCon-B on not only reproductive success, but also the behavior of wild (feral) horses at Theodore Roosevelt Park. They examined the social behavior of horses before and after management culling and noted that the differences in behavior between treated and untreated female horses was minimal. However, the "social behavior of harem stallions changed markedly following population culling," according to the article, "Behavior of Feral Horses in Response to Culling and GnRH Immunocontraception." 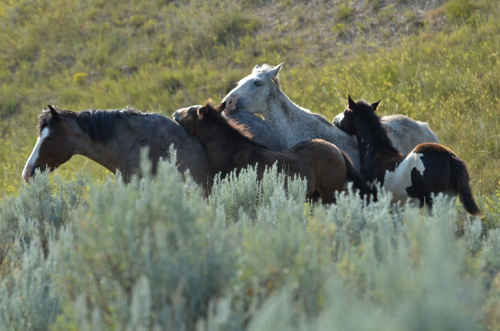 The bottom line is that horses are social animals with a very complicated hierarchical network that is especially susceptible to disruption. Sudden culling is an immediate and profound assault on social cohesion. The development of contraceptive techniques can mitigate or erase this effect. At least that is the hypothesis that science is considering.

Common sense would indicate there is truth in the hypothesis.

In June 2013, The National Science Academy issued a 451 page report that favors contraception over culling.

A 14-member panel assembled by the National Science Academy's National Research Council, at the request of the Bureau of Land Management, concluded BLM's removal of nearly 100,000 horses from the Western range over the past decade is probably having the opposite effect of its intention to ease ecological damage and reduce overpopulated herds.

McCann realizes that maintaining band structure is critical, and removing old stallions is not the answer. He wants to see a stratified population where pedigree and in-breeding information is used to make final decisions on which individuals are to be removed. Through research,TRNP is working to evaluate low-stress herding techniques and corral trapping.

This year, officials were able to take hair samples from all but 17 of the horses. The hair is being analyzed for genetic markers. "Our goal is to understand parentage and diversity of the horse population to inform culling strategies and provide information regarding herd health, McCann said.

Challenge yourself to visit the park in a succession of years and you will become familiar with individual horses and bison. It is hard not to contemplate the fate of a young foal that is the spitting image of the magnificent stallion who sired him and who is standing watch nearby. 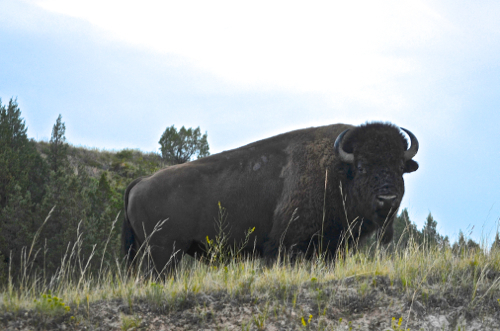 Notice the old bull bison year after year as he ambles down a well-worn path that your own boots walked when your now 28-year-old daughter was an infant. Will there be enough for him to eat in the coming years when age has worn him down?

As someone who focuses on the spiritual connections that wildlife offer, I wish we would stop interfering animals completely, whether by hunting or management. But reality offers a different point of view. When you think about it, we are all stewards of our environment. The trick is to combine the existential possibilities of mind, science and spirit, remembering the First Nation admonition that "we are all one." 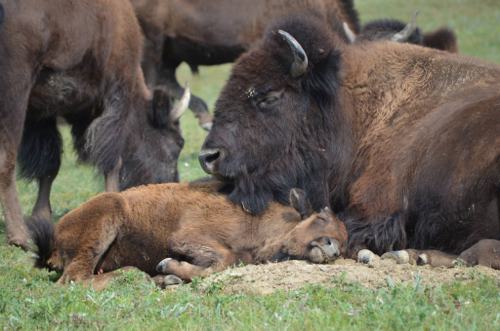 As far as the buffalo are concerned, 159 were taken last year, and 609 remain. 140 were released to the Intertribal Buffalo Council.

The ITBC coordinates the transfer of surplus buffalo from national parks to tribal lands. 13 individuals from TR National Park went to the Buffalo Museum in Jamestown, ND.

To diminish the animal kingdom is to diminish ourselves. This is the realm of philosophers, poets, healers and shamans. It is not necessarily incompatible with humane and thoughtful management. The key word is, of course, "humane." In this regard, a well-studied contraceptive program offers the best hope for herd management that does not assault herd social structure. The headline no one wants to see is a report of mortality due to culling operations. The stress endured by the animals is more than enough.

(All photos by G. Nienaber)