As I reported in The Economic Philosopher's Outcast: Mises, the great Austrian economist Ludwig von Mises narrowly escaped capture by the Gestapo after the Nazis occupied Vienna in March 1938. What I didn't mention is that he was forced to leave his voluminous papers behind -- a painful experience for any writer! 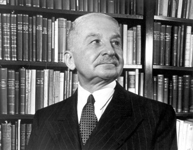 Although the Gestapo failed to nab Mises, who had escaped to Switzerland, they ransacked his apartment at 24 Wollseile, confiscating his manuscripts, articles, university lectures and extensive correspondence with many of the greatest thinkers of his time.

The Nazis were after Mises not only because he was Jewish, but because he was a brilliant, outspoken opponent of social engineering and central planning. Mises championed a free-market economy as the best way to protect individual liberties, spur innovation and raise living standards. He argued that Germany's spiraling inflation was a result of government mismanagement of monetary and banking systems. As a result, Ebeling notes, "both fascists and communists hated him."

Mises founded the Austrian Institute for Business Cycle Research in 1926, with a young Friedrich A. Hayek as its first director. As a senior economic analyst for Vienna's Chamber of Commerce, Mises railed against waves of interventionist and socialist legislation implemented by the Austrian parliament. Mises held salons at his home that brought together the best young minds in Vienna to discuss the dangers of socialism for European economies and for human liberty. Mises was an advocate of entrepreneurship who argued that entrepreneurs created much of society's wealth. No wonder Hitler was threatened by him!

In 1940, Professor Mises emigrated to the United States, where he taught at New York University until age 87 and wrote many influential articles and books, including his masterpiece Human Action: A Treatise on Economics. Sadly, Mises died believing his papers had been destroyed by the Nazis. 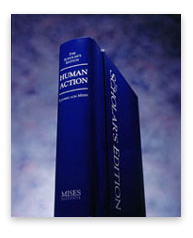 Miraculously, though, his long-lost papers were discovered in a secret Moscow archive in 1996 by American economist and Mises scholar Richard Ebeling -- who has been my friend for 30 years.

During World War II, the Nazis stored literally tons of art, musical scores, manuscripts and other intellectual property on boxcars. According to Ebeling, 24 boxcars packed with documents were moved to Bohemia in western Czechoslovakia. When Bohemia was "liberated" by the Soviets in 1945, soldiers who came across the boxcars contacted Stalin's secret service.

The agents quickly grasped the incredible value of what they'd found and informed Stalin, who ordered the boxcars brought to Moscow. Over "20 million pages of captured documents, from 20 Nazi-occupied countries" were stored in a nondescript building called the Center for the Preservation of Historical Documentary Collections that Stalin had built on the outskirts of town. For decades, only the KGB and Soviet Ministry of Foreign Affairs had access to this top-secret archive, which included papers by Mises, Albert Einstein and Immanuel Kant -- even original scores by Wolfgang Mozart.

After hearing rumors that Mises's papers might have survived the war, Ebeling made inquiries at the Holocaust Museum in D.C. The museum researchers found no mention of Mises in their database, but on a hunch Ebeling asked if there could possibly be anything related to Mises in Moscow.

Museum staff member Karl Modek came over to talk to Ebeling. Modek was looking into a Soviet archive of documents that had recently been declassified, and had just received an index of the archive. In the index, Ebeling and Modek found the name "Ludwig Mises," with "Fund #623" printed next to it.

Thrilled by this discovery, Ebeling returned to Hillsdale College, where he was Ludwig von Mises Professor of Economics, and raised funds from the school to travel to Moscow to explore mysterious Fund #623.

At the Center for the Preservation of Historical Documentary Collections, Ebeling and his Russian-born wife, Anna, found Fund #623. It contained over 10,000 pages that took them 10 days to go through and photocopy. They wore out the Center's copier!

The papers prove, Ebeling says, that "Ludwig von Mises was one of the most important free-market economists and philosophers of freedom in our time."

These thousands of pages of archival material bring to light a new side of Ludwig von Mises. Here we see Mises as more than just the brilliant economic theorist demonstrating the unworkability of socialist central planning and the inherent contradictions of the interventionist state, or as the grand expositor of a universal theory of human action and the market process.

We see Mises as serious and methodical policy analyst in the twenty years between the two World Wars -- one who explains how to save a society facing a hyperinflation by introducing an alternative currency in place of the debased government money; how to bring an economy out of a great depression; how to rein in an interventionist bureaucracy that is strangling a market
economy; how to end foreign exchange controls that are distorting and hindering international trade; or how to construct a fiscal policy so it no longer stifles investment and capital formation.

Ebeling supervised and edited the translations of Mises papers, which have been published in the three-volume Selected Writings of Ludwig von Mises (Liberty Fund). He is currently a professor of economics at Northwood University in Midland, Michigan.