Let's face it, it's not about saving the planet. The planet is going to be just fine without us. The bigger question is will we be able to live on it for a while, and will be we be able to do so without a whole lot of pain? This is definitely a Save Ourselves situation.

Case in point: The unpleasant and unhealthy smoggy 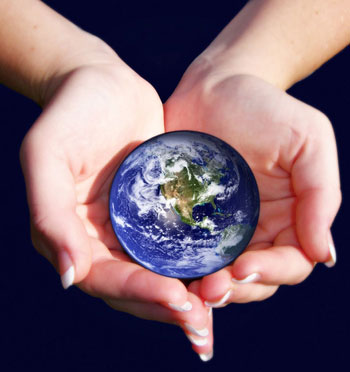 opening to the Olympics. Despite the car bans and the factory closures, China was not able to prevent a thick coat of pollution from settling on the city. There is even some talk of postponing some events, such as cycling.

The point is, we could continue reeking havoc on the world, unchecked -- but would we want to breath the air, drink the water, and live with all the trash around us? Frankly, on this path, the earth will become a pretty horrible place to live.

And yes, eventually, our survival comes into question.

We all saw "An Inconvenient Truth," but here's a reminder of some of the science-backed statistics: Deaths from global warming will reach 300,000 a year in 25 years -- more than double the amount now. Malaria will spread. Heat waves, droughts, hurricanes -- all will be more frequent. More than a million species will disappear.

On the other hand -- if the world's biggest invasive species (that would be us, folks) -- took a hike, the world would quickly reclaim itself, according to Alan Weisman. In his book "The World Without Us," labeled a "nonfiction eco-thriller" by The New York Times, Weisman predicts that New York's subway system would fill with water within two days, the world's 441 nuclear plants would melt down into radioactive heaps within weeks, and Lexington Avenue would transform into a river in a mere 20 years.

We need to learn from China and their choking smog. If for no other reason than for the luxury of stepping outside to suck in a big gulp of clean air.

More from Graham Hill on Huffington Post
::Eating Local or Not: It Depends
::Tap Has 1/100 Impact of Bottled Water
::Do Big Homes Mean Bigger Happiness?
::Why I Don't Flush
::Would You Kill What You Eat?
::Europeans Happier than Americans yet Half the Footprint
::Phones as Fashion: Can You Resist the New Apple iPhone?