When the Deepwater Horizon exploded in April of 2010, I decided I needed to do all I could to help save the environment. Since then, I've met hundreds of current and future environmentalists, but none have been nicer than my fellow 'bird nerds.' I've also
discovered how you treat the environment says a lot about who you are as a person.

It's hard for me not to notice when people put toxins on their lawns, or let their cars idle in parking lots. Some people think nothing of throwing their litter out of their car windows. On the other hand, many people bring reusable water bottles with them, or carry their own tote bags to the supermarket. These are personal choices that show how some people have compassion for our planet, while others only think about the short-term convenience.

But what about on a bigger scale? Over the past hundred years, some of the worst polluters have been companies that put profit over a clean environment. Before important environmental regulations like the clean water act, companies were free to dump their waste wherever they wanted, poisoning our environment and leaving it for future generations to clean up. For example, near where I live on Long Island, there is a plume of toxins in our groundwater that spans several miles, left over from chemicals on an abandoned factory site. Not only does this type of dumping raise the risk of cancer on Long Island, but our government now has to pay an expected $61.5 million dollars to clean it up. Decisions like these are selfish and short-sighted.

How about our government? There are some politicians who argue that dead birds are just casualties of progress. I disagree. An oil spill here, deforestation there, and before you know it, bird populations are plummeting. Like a canary in a coal mine, the absence of birds tells us that our environment is suffering. We should only elect leaders who consider the long-term impact of their decisions. Issues like drilling for oil, hydrofracking, and tar sand pipelines are short-term energy solutions that can lead to long-term destruction. Everybody's forgotten the Deepwater Horizon well, but it's started leaking again. According to Audubon's Melanie Driscoll, although the Coast Guard has determined that the oil at the rig site is not recoverable and will not cause environmental harm at the shoreline, it doesn't mean that it will not cause any environmental effects. Meanwhile, Hurricane Isaac uncovered mats of tar, which are now washing up along beaches on the Gulf Coast. Conservation doesn't have to be an issue to divide our country. Saving birds can unite us! Although I can't vote yet, I'd vote for someone who is concerned about protecting the environment we have left and who can think outside the box. For example, there is developing technology that can turn sewage into energy. I know that sounds gross, but instead of polluting our waters with sewage and drilling for more oil, we can save two birds with one solution! Talk about renewable energy!

So when my generation thinks about who we want as our leaders, we should look at how they treat the environment. It will be an easy way to see how they feel about our future. 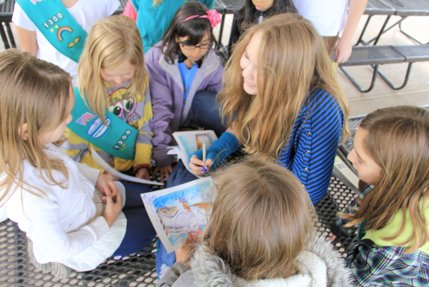 13-year-old Olivia with environmentalists in Wyoming.