If you think you can save your way to wealth, you’re wrong. Spending less than you make is not the path to riches. Instead, wealth comes and goes as asset prices -– real estate, stocks, and bonds -– rise and fall.

This is why most Americans have no shot at ever being wealthy, while the already-wealthy people who own those assets just keep getting wealthier.

Investor and blogger Steve Roth recently crunched government data and found that household saving -- whatever income people have left over after their spending -- has little effect on boosting wealth. 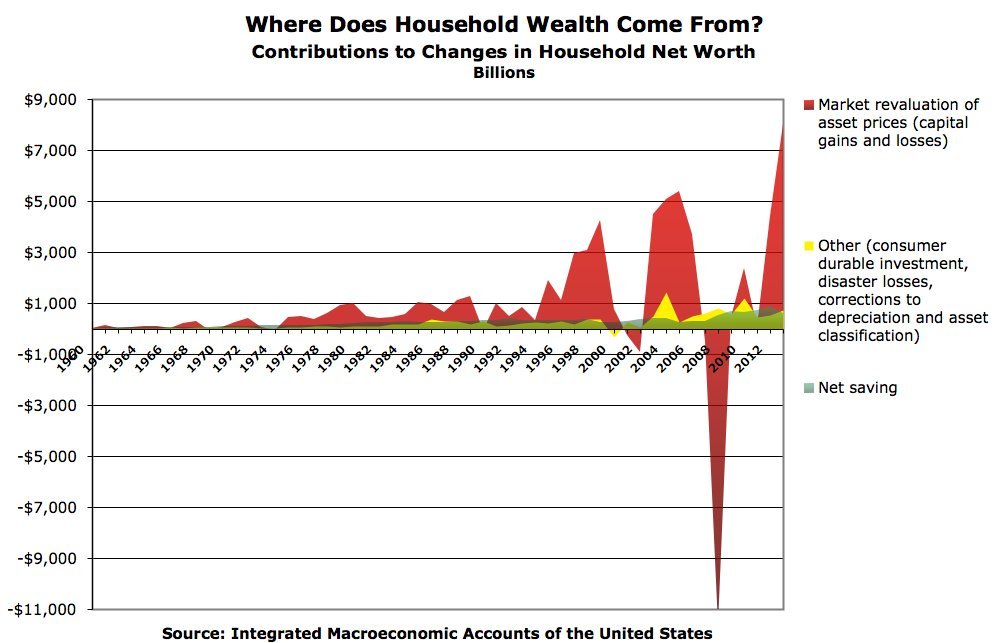 The huge red swings -- representing major asset classes like stocks and real estate -- dominate the up and downs of household wealth. The tiny sliver that is saving is small -- and, Roth notes, getting relatively smaller. (Note that saving, in this case, does not include the capital gains people get from selling assets for a profit.)

Letting speculation work for you, not saving, is how wealth is truly built in America. Net worth is tied to the market value of some illiquid things (houses) and some liquid things (stocks, bonds).

Saving money isn’t necessarily a bad idea. It can help you in lots of ways. But, in the aggregate, it’s not how we get rich.

Recent years have shown just how misleading and harmful homilies like “work hard. Spend a little. Save the difference. Let your assets work for you,” from the Motley Fool, are: misleading because saving is not the primary way wealth is accumulated; harmful because people when saving fails, people think they are the failure.

If you’ve internalized that advice, it’s hard not to feel like a failure. American incomes have finally halted their decade of decline with a year of stagnation. Wages are flat. Home prices, we found out, can go down as well as up. They’re recovered in some places, but many people saw most of their wealth disappear in the housing crisis. The stock market has been on a tear, of course. But that has meant rising wealth for a very small group.

Millions of Americans missed out on the wealth-spinning party by selling when stocks were low, or by being unable to afford to invest at all. Saving money won't come close to helping them make up that wealth.