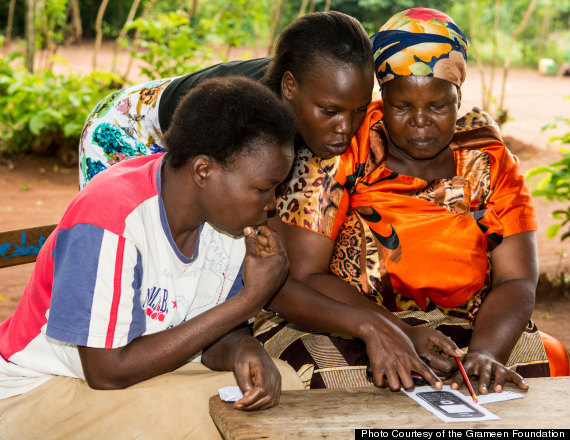 Women are the backbone of the household in Africa -- they manage the home, care for the children, are responsible for education and healthcare, and contribute to the household's livelihood. Helping women helps the entire family. However, women continue to lag men in participating in the formal economy, including accessing financial services.

The Problem: The Poor -- Especially Women -- Are Excluded From Financial Services.

For the rural poor -- especially women -- accessing formal financial services is nearly impossible. Few have formal identification needed to open an account; others lack a stable job or collateral needed for a loan. Often bank branches are far from a rural village, making the trip to deposit or borrow funds too expensive and time-consuming.

Many of the rural poor have taken up an approach to support saving and borrowing by forming Village Savings and Loan Associations (VSLAs). Under this approach, 25-30 members of a community form a group. This group meets weekly and saves a fixed amount -- at times, as little as 20 cents a week. The savings are lent out to members as loans. All money not lent out is stored by the group treasurer in a metal box secured with three locks and three keys, which are held by three separate key holders. It is, as some group members call it, the "Village Bank."

The Benefits And The Challenges Of The "Village Bank"

Group savings is wildly successful, with millions of individuals across Africa reporting themselves enrolled in VSLAs or other forms of savings groups. In Uganda alone, where Grameen Foundation works closely with savings groups, the FinScope 2013 survey revealed that nearly 2 in 3 adults save in some sort of group. Savings can yield big money over time -- by the end of a one-year cycle, some groups have thousands of U.S. dollars locked in the box.

The challenge, however, is that cash is risky, and the group's success can be tempting for local thieves who may target a treasurer's home. Storing these funds as cash also means that the group's rich transaction history is invisible to formal institutions that might be able to provide more services to groups if they had insight into transaction activity. While some banks offer formal products to groups -- like group savings accounts offered by Barclays' Banking on Change program -- many groups find that they are located too far from a bank branch.

These issues -- the insecurity of cash, and the challenge in accessing cash-in/cash-out points like bank branches -- are issues that mobile money has been tackling across Africa for years. Mobile money allows individuals to deposit money on an electronic wallet (e-wallet) associated with their SIM card using their basic feature phone at any local agent location, which is often a shop in a local village. They can then send money to friends or family or transfer the funds to their bank account.

This infrastructure is already in place and could be used to help groups. The problem to-date, however, is that mobile financial services are tailored to individuals and secured by a single PIN number. For a group to feel secure depositing money into this virtual system, they need group-level security.

Grameen Foundation and Airtel, one of the leading mobile operators in Uganda, partnered to develop a solution called Airtel Weza. This new wallet took the analog product -- a box with three locks -- and digitized it. The product features a 3-PIN system requiring approval from three group members before funds could be removed from the group's account. To ensure that three members cannot collude, additional text messages are sent to other members in the group as well. Instead of a box for physical storage, funds are stored virtually. Instead of three locks, there are three PINs. The product was launched in the Kamuli region of Uganda earlier in August, and Airtel will continue expanding across the country in the coming months.

An Upside For Both Customers And Providers

The product serves a major social need for women involved in savings groups by giving them a safe place to store excess funds. It stimulates the local economy - over 40 percent of women report that having access to a phone provides greater access to income-generating opportunities. However, attracting women to mobile services is not just a local good; it is also a boon for mobile operators and financial institutions. According to research by the GSMA mWomen team, 21 percent fewer women than men own mobile phones in middle and low-income countries. This translates into a gender gap of 300 million women and a revenue loss of $13 billion for operators. For banks, individual small savers and borrowers can be too costly to serve; offering group products provides an efficient way to serve the poor.

Developing products tailored for this market, such as products tailored for women-dominated savings groups, helps operators reach out with an offer that resonates and encourages uptake. For women, it is an important opportunity to start participating in the formal sector through the use of mobile financial services and to start slowly closing the gender gap.