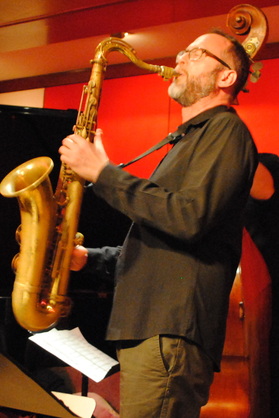 Saxophonist Michael (not Mike) Blake is one of those artists who have a sustained appreciation of the tradition and for those who have come before him. In 1984 while still in Canada he had an opportunity to work with jazz stalwarts Cecil Taylor, Kenny Wheeler and Steve Coleman. The Canadian born musician has been a New York resident since 1987. Blake paid his dues backing artist like Chubby Checker and organist "Brother" Jack McDuff among others. In 1990 Blake was catapulted into the eclectic world of multi-disciplined artist John Lurie and joined Lurie's Lounge Lizards, a critically acclaimed group that included Lurie and his brother Evan, guitarists Marc Ribot and Dave Tronzo, bassist Billy Martin and trumpeter Steven Bernstein. The group has maintained a transient presence in the downtown New York music scene for over 20 resurfacing occasionally for special occasions. Blake also became the solo saxophone voice of the group Slow Poke and worked extensively in his own groups and in groups led by the progressive young bassist Ben Allison.

Blake's latest release Tiddy Boom, is a reference to a phrase Blake once heard idol Lester Young call out to a drummer on a film clip. Pres asked the drummer to give him "a little tickity boom, please." Blake proves that good, swinging music played in a style reminiscent of the old masters like Young and Coleman Hawkins can be just as powerful and compelling as it was when these iconic saxophonists were alive and wailing.

Blake has mastered that deep throaty sound that was popular when these giants ruled the bandstand. He has a legato sound that wrings the essence of a note out in a sultry, lingering way. This lush sound can be heard on such songs as the loping "Skinny Dip," and the rhumba inspired title song "Tiddy Boom," "A Good Day for Pres" and the beautifully paced "Hawk's Last Rhumba," one of my favorite pieces on the album for the resplendent sound Blake gets on his horn in homage to Hawkins.

While the music is derivative, it never feels copied, and the group backing Blake is superb. Ben Allison's plucky bass lines strut majestically throughout and Rudy Royston's tasteful cymbal work and feathery brushes are a delight. Pianist Kimbrough subtly shines with his piano accompaniment and he and Blake often have a sensitive interplay that is palpable, especially on the boppish "Coastline." Kimbrough's solo on "Letters in Disguise" is a swinging display of masterful keyboard work, and Blake breaks loose with a solo that shows he too is not stuck in a time warp.

The jaggedly modern "Boogaloop" let's you know these guys have progressed to a level of musical sophistication that has reached beyond their masters. The last composition titled "The Ambassadors" is a musical declaration from Blake and his cohorts that this music will always have its representation in the repertoire and these young lions will be both respectful ambassadors of that sound as well as creators of their own. There is something here for everyone.