What does modern slavery, also known as human trafficking, have to do with you or me? Everything! Whenever the cotton in our shirts is picked by children in Uzbekistan, whenever metals in our smartphones are mined by children in Congo, and whenever the coffee we drink is harvested by child slaves in Ivory Coast, we are supporting slavery.

Why should lesbian, gay, bisexual and transgender (LGBT) people care? Don't we have enough on our plates? In my time as the moderator of Metropolitan Community Churches (MCC), I have learned that all social issues are LGBT issues. In the case of human trafficking, around 10 percent of the millions who are trafficked are LGBT. As citizens of the world, we cannot just care about issues that we think are "ours." If we are human, then human trafficking is about all of us. We are in this together. We must fight this together.

There is an abolitionist movement that has been growing for over a decade, but it has to come out of the closet. Abolitionists must become visible in order to eradicate human slavery. I only learned about this movement in 2011, when President Obama appointed me and many others to the Advisory Council on Faith-based and Neighborhood Partnerships. Together we produced the report "Building Partnerships to Eradicate Modern-day Slavery," released April 10, 2013. (You can read the full report here.) The faith council included conservatives, moderates and liberals with diverse perspectives, but we were unified in the need to challenge slavery in our time. Our differences paled as we were educated by professionals working every day to end modern slavery.

The stories from survivors of human trafficking were even more powerful. Who is not moved by the story of a 5-year-old fish diver in Southeast Asia who was beaten with oars if he surfaced too quickly? When he finally escaped to a shelter, he did not know how to smile. I was stunned when I learned that single mothers in Texas were targeted through their children's daycare and forced into prostitution. I weep for the teenage girl prostituted in New York City who was repeatedly mistaken for a criminal rather than seen as a victim. And families grieve for missing girls who are promised a night on the town and find themselves raped in a strange hotel. In less than a day they are on the street in high heels and a miniskirt, shamed and wondering if they can ever go home.

The report makes the connections between homeless youth, 40 percent of whom are LGBT, and domestic trafficking in the United States. With LGBT youth at risk and over 77 percent of victims being persons of color, our mandate is clear: Prejudice makes people vulnerable to hate, violence and being enslaved, so we must challenge prejudice wherever it is found.

Labor and sex trafficking of adults and children is at least a $32-billion industry, and it's being fought with meager resources. This must change. Currently, human trafficking is a low-risk, high-profit business. It must become a high-risk, low-profit enterprise.

The Obama administration is seriously engaged in the issue. All of us on the faith council became converts to the urgency of this problem, which has a direct impact on more than 21 million people in bondage and countless loved ones and community members. Our report calls for a White House summit and a Global Fund to Eradicate Slavery that is modeled after the Global Fund to Fight AIDS, Tuberculosis and Malaria. 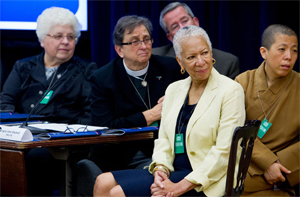 It has been an honor to serve on the president's faith council, hear the stories of survivors and work with diverse council members as we set aside our differences to make a difference in the world. Working side-by-side with a Buddhist, a Roman Catholic nun, a Mormon leader, a Greek Orthodox archbishop, the head of the National Association of Evangelicals, a Rabbinical leader and other religious dignitaries who have given their lives to working for justice and good causes has changed me, and I believe I changed them. Being an out lesbian and a global religious leader of MCC, I believe I helped my colleagues grow into a fuller understanding of the diversity of the global faith community. The mutual respect was palpable and powerful.

I was also changed by brave and determined survivors, and by people who are modern abolitionists. Survivors say, "I was a victim of slavery, but it is not who I am." Abolitionists are voices crying in the wilderness. We need to listen. We need to act.

And if you have never taken the slavery footprint test, take it today. Each of us took the test before our first council meeting, and it challenged everything we thought we knew. May it change and challenge you, as well. You can find it at slaveryfootprint.org.